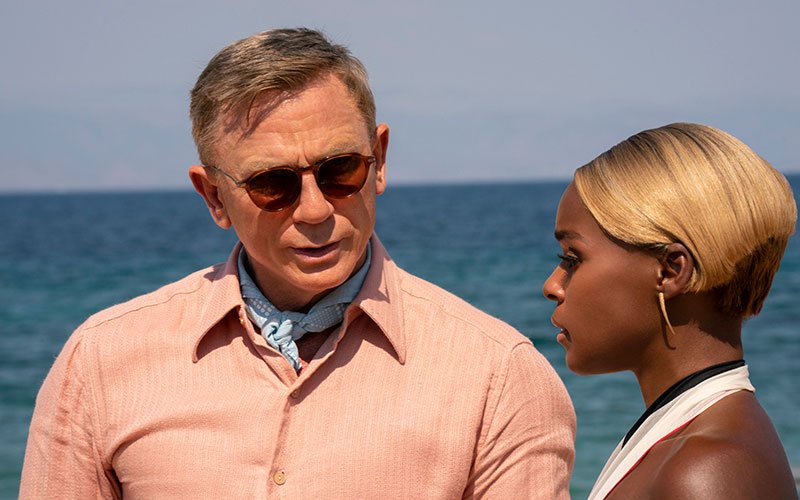 Daniel Craig, and Janelle Monáe star in a scene from the movie "Glass Onion: A Knives Out Mystery." (OSV News photo by John Wilson, courtesy NETFLIX)

(Catholic Review Media) — Comedies that fall flat and films that fail to engage viewers’ intellect are so common that the 2019 release of “Knives Out” was nothing short of a delight. The comic whodunit was by turns intriguing and amusing.

Three years and a global pandemic later, returning writer-director Rian Johnson serves up a sequel, “Glass Onion: A Knives Out Mystery” (Netflix). The good news is that, overall, the movie proves a worthy successor to its sparkling precursor. Less welcome is the fact that language issues throughout and a needless momentary nod in the direction of prevailing mores make this follow-up fit only for adults.

At the center of the action once again stands Benoit Blanc (Daniel Craig), the deeply Southern, presumably Cajun detective. Acknowledged as the world’s greatest sleuth, Blanc has nonetheless been in something of a decline for lack of a challenging case with which to grapple — fans of Sir Arthur Conan Doyle’s Sherlock Holmes will recognize the pattern.

Blanc’s boredom is alleviated once he finds himself on the Greek island that serves as the retreat of eccentric billionaire Miles Bron (Edward Norton). There, the mogul plans to stage his own fake murder so that the motley coterie of old friends he annually assembles can spend an entertaining weekend solving the crime.

Thus we’re introduced to a variety of vivid characters who knew Bron before his rise to wealth and fame. They include rough-grained politician Claire Debella (Kathryn Hahn), and researcher Lionel Toussaint (Leslie Odom Jr.) — both of whom are doggedly refusing to endorse Bron’s latest “breakthrough.” Also on board is the hilariously ditzy model-turned-designer Birdie Jay (Kate Hudson) and muddleheaded social influencer Duke Cody (Dave Bautista).

Present for less obvious reasons is Cassandra “Andi” Brand (Janelle Monáe), Bron’s ex-business partner, who accuses him of betraying and ruining her. Andi’s addition to the mix is just one reason Blanc fears that his host’s proposed game may go awry. In fact, it’s not long before the stakes are raised dramatically when a real homicide is committed.

As long-standing conflicts among the ensemble of guests are brought to light, Johnson successfully relies on his previous recipe, mixing humor with the elements of a thriller to enjoyable effect. Yet even some grown-ups may be put off by the more vulgar ingredients, both verbal and visual, on which he draws.

Additionally, there’s a brief scene suggesting that Blanc is in a homosexual relationship. Like his Louisiana origins, this aspect of his backstory is left vague, at least on screen. Within the context of the film itself, there’s nothing to indicate that Blanc and the other man are anything more than “Odd Couple” style roommates. At any event, it’s a fleeting interlude in what is otherwise a sophisticated, rollicking — though perhaps overly earthy — piece of entertainment.

Look for: Mostly urbane wit along the path of a search for justice.

Look out for: Off-color jokes and sexual content, including implied same-sex cohabitation, a bedroom scene and partial nudity, drug use, about a half-dozen profanities, frequent mild swearing, at least one rough term, pervasive crude language and obscene gestures.

The Catholic Moviegoer’s guidance is M — suitable for mature viewers. The Motion Picture Association rating is PG-13 — parents strongly cautioned. Some material may be inappropriate for children under 13.