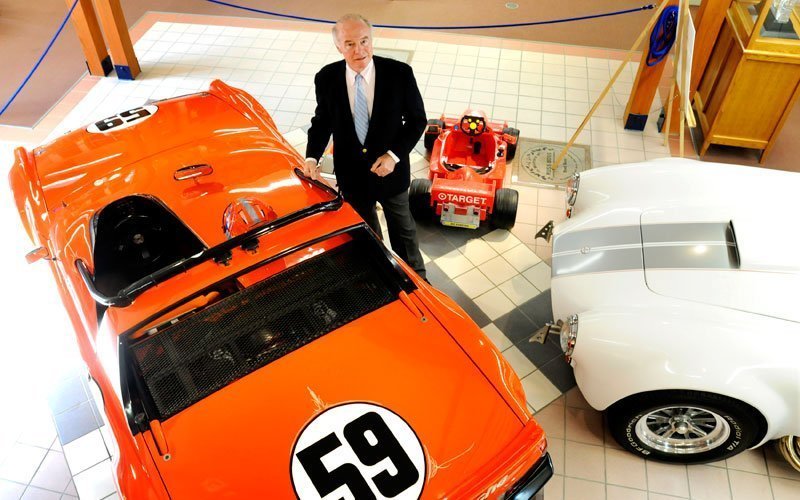 WATKINS GLEN — As one of nine children, J.C. Argetsinger is no stranger to large gatherings.

“People still remember how we would fill up a pew,” Argetsinger said of his childhood days attending St. Mary of the Lake Church, where he currently belongs.

Argetsinger’s father, Cameron, not only had a sizable family but thought big in other ways as well. The elder Argetsinger, who died this past April 22 at age 87, changed the face of Watkins Glen by realizing his vision of bringing automobile racing to town some 60 years ago.

Argetsinger said his dad, who at the time was a 27-year-old pre-law student, somehow convinced local officials to approve a 6.6-mile road race that would wind through the village and surrounding rural roads.

“It simply wouldn’t have happened without my father,” he remarked. “He was a dreamer who was also a doer. I could remember him mapping out the course on our living-room rug with toy cars. He was a visionary. He could see this happening.”

Within a few short years after the inaugural Watkins Glen Grand Prix in 1948, the race gained worldwide acclaim and attracted well in excess of 100,000 spectators. Racing moved in the mid-1950s to the newly built 2.3-mile Watkins Glen International Speedway, three miles outside the village. Today that track continues drawing massive crowds to Schuyler County with a slate of yearly races such as the Centurion Boats at the Glen, a NASCAR competition that will take place Aug. 10.

Watkins Glen’s strong link with motor sports is reflected in its many street signs designed in the shape of racing cars. An example of this eye-catching artistry can be found on the signs marking Decatur and Ninth streets — the corner on which St. Mary of the Lake Church rests.

The church is only a block away from the main drag, Franklin Street, where eateries, souvenir shops and such do bustling business during warm-weather months. Terri Orbin, business manager for Schuyler Catholic Community — the cluster of St. Mary of the Lake and St. Benedict in Odessa — gets in on the action by serving ice cream part time at the Glen Dairy Bar, 433 S. Franklin St.

“It’s fun. In the summer you see people more often,” she said.

Orbin observed that Sunday Mass attendance at St. Mary of the Lake tends to rise by 50 to 100 people during summertime. She added that out of the church’s two Sunday liturgies, held at 8 and 10 a.m., the earlier one “is always packed” because people are raring to go with daylong outings at the race track — or perhaps visits to Watkins Glen State Park, or water activities thanks to the village’s setting on the southern tip of Seneca Lake, or tours of the many wineries that dot the area.

Argetsinger and Orbin recalled that at one point, when priest availability was greater, a 7 a.m. Sunday-morning Mass would be held right at the speedway. Still, many spectators make it down to St. Mary of the Lake on Sundays of racing weekends.

“Shorts, race shirts, whatever — you definitely can tell them,” Orbin said of the visiting worshipers. “It’s a lot more casual in the summertime.”

For all the craze about cars, Orbin said Watkins Glen’s natural beauty is another reason people love the area so much with its lake, trails, gorges and waterfalls.

“You just forget how beautiful it is here, the nature of it. We get so caught up in the busyness of the world and the rush, rush, rush. I think we’re pretty unique here,” said Orbin, who added that she tells her children that they’ll appreciate having lived in a small town once they move to a big city.

This superb natural setting is what Argetsinger said inspired his dad to steer folks toward Watkins Glen in the first place.

“An awful lot of people came to visit the races, and stayed Monday and Tuesday because they realized how beautiful it was,” said Argetsinger, who, like his father before him, is a longtime attorney and has been active in several national racing associations. He currently serves as Schuyler County’s judge.

Argetsinger added that this increased exposure sparked a huge spike in the area’s overall tourist trade.

“It has changed the impact of the whole county,” he said.

Despite the influx of visitors, Argetsinger said Watkins Glen maintains a hometown feel and that many multigenerational families from St. Mary of the Lake — which was established in 1846 — have helped foster that. He observed that a few years ago, the parish raised enough funds to cover a substantial renovation project.

“It just amazed everyone in the (secular) community that the Catholic community could do it. It showed how much people cared for their parish,” said Argetsinger, who noted that his father wasn’t Catholic but his mother, Jean, continues to be an active parishioner of St. Mary of the Lake.

Argetsinger said St. Mary’s members haven’t forgotten that despite all of Schuyler County’s tourism aspects, the area is one of the most impoverished in the state.

“They’re always trying to do outreach,” he said.

St. Mary of the Lake also reaches out to those who come for fun and relaxation: Many parishioners are active volunteers in such community events as the Italian-American festival in early August and summer concerts in Lafayette Park. In addition, the parish offers summer coffee hours after Sunday Masses under an outdoor tent.

“I think the visitors love it when they see people shaking hands and hugging each other. They can see what a close-knit community it is,” Argetsinger said.