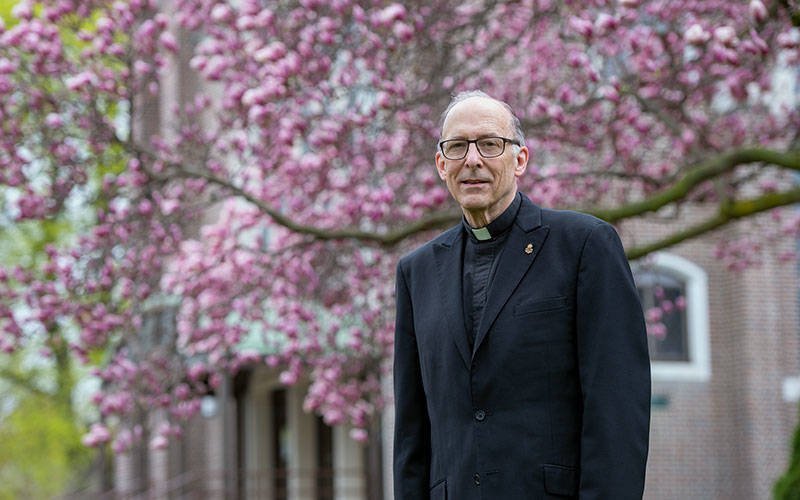 Father Robert Schrader asserts that “travel is a good teacher,” and in that regard, he has been a model student.

Father Schrader has visited all seven continents, including Antarctica in 2009. He’s also visited all 50 states, all 62 counties of New York state, and all of Canada’s 10 provinces and three territories.

In contrast to his globe-trotting tendencies, Father Schrader has been quite grounded in his priestly assignments: He’s had only two pastorates in the past 29 years. The latter, a 17-year commitment at Rochester’s Peace of Christ Parish, will conclude in late June as Father Schrader, 72, reaches senior-priest status.

He served as priest intern at St. Monica Parish in Rochester from 1978-81, parochial vicar at St. Theodore in Gates from 1981-85 and diocesan director of priest personnel from 1986-91. In 1992, following a sabbatical earlier that year, Father Schrader became pastor of St. Mary Parish in Auburn and continued in that role for the next 12 years.

In 2004, he began his pastorate at St. Ambrose, St. James and St. John the Evangelist in Rochester, where he was charged with blending the three churches into a single parish. Father Schrader said that the transition, which resulted in the founding of Peace of Christ Parish in 2007, has gone very well.

Father Schrader’s send-off celebration will take the form of a June 24 picnic at St. James Church. The following week, he will take up residence at Our Mother of Sorrows Church in Greece.

While remarking that he’s “happy for all the relationships and experiences in 43 years of priesthood,” Father Schrader said he also is looking forward to the future. He plans to celebrate Mass at area parishes as needed and continue his service with the diocesan Priestly Life and Ministry Team, for which he serves as coordinator.

Although he doesn’t anticipate traveling as extensively as in the past, Father Schrader expects to keep busy with such other hobbies and interests as writing, reading and photography. He also enjoys songwriting and playing the recorder (a flute-like instrument); he even attended the iconic Woodstock music festival in 1969.