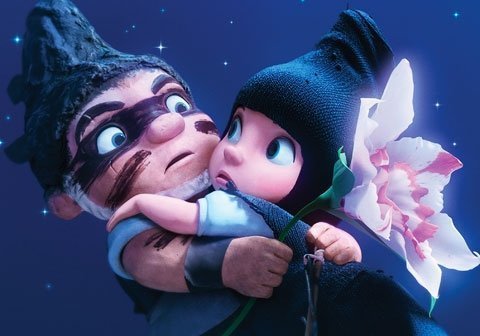 NEW YORK (CNS) — William Shakespeare’s classic tragedy of star-crossed lovers morphs into an animated comedy in "Gnomeo & Juliet" (Touchstone), a slightly warped but ultimately winning film that offers good clean fun for the entire family.
?
"This story has been told before, many times," our narrator, a garden gnome in a pointy hat, tells us, "but never like this." Indeed not: what with talking statues, a philosophical flamingo, a love-sick frog and a rock-and-roll soundtrack by Elton John and Lady Gaga, we’re definitely not in Kansas, let alone fair Verona.
?
"Gnomeo & Juliet" takes several strands from Shakespeare’s play and weaves them into a clever morality tale wrapped around themes of good versus evil and the importance of family.
?
In modern-day Stratford-upon-Avon, grumpy old Mr. Capulet (voice of Richard Wilson) lives next door to grumpier Miss Montague (voice of Julie Walters). He prefers the color red; she, blue. He lives at apartment number 2B (get it?), she’s also at 2B, but it’s crossed out (and therefore not 2B).
?
Their rivalry extends to their backyards, where each maintains an elaborate garden filled with — you guessed it — smiling gnomes of every shape in their favorite colors.
?
When the adults aren’t around, the gnomes come to life, a la "Toy Story," and proudly tend their gardens, keeping a wary eye on each other across the fence. Juliet Capulet (voice of Emily Blunt) stands atop a tower, pondering her Red-bound fate and longing for adventure. "I can’t stay here tucked away on this pedestal all my life," she laments.
?
Meanwhile, Gnomeo Montague (voice of James McAvoy) is the big gnome on the Blue campus. He challenges Juliet’s cousin Tybalt (voice of Jason Statham) to drag races with lawnmowers in the back alley. In "West Side Story" fashion, these intensify the blood feud between the young Reds and Blues, as they chant, "Let’s kick some grass."
?
Fate brings Juliet and Gnomeo together in an abandoned greenhouse, and it’s love at first ceramic clink — the result of their effort to kiss. "Will you build a garden with me?" Gnomeo asks. Family tensions and (literal) differences in color threaten to drive them apart, but a wise pink flamingo named Featherstone (voice of Jim Cummings) puts everything in perspective.
?
The voice talent in "Gnomeo & Juliet" is first-rate, and ranges from the mighty (Maggie Smith, Michael Caine) to the bizarre (Ozzy Osbourne, Dolly Parton). Patrick Stewart is a standout as the statue of "Bill" Shakespeare in the local park, who shakes his head in despair as the gnomes subvert his tragedy with a happy ending.
?
Directed by Kelly Asbury ("Shrek 2"), "Gnomeo & Juliet" is refreshingly free of the bathroom humor that dominates all too many movies for kids these days. Adults will enjoy the many puns and sight gags, from the "As You Like It" moving van and the "Tempest Teapots" company to Featherstone’s various comic pronouncements, including: "A weed by any other name is still a weed."
?
The Catholic News Service classification is A-I — general patronage. The Motion Picture Association of America rating is G — general audiences, all ages admitted.
?
– – –
?
McAleer is a guest reviewer for Catholic News Service. More reviews are available online at www.usccb.org/movies.