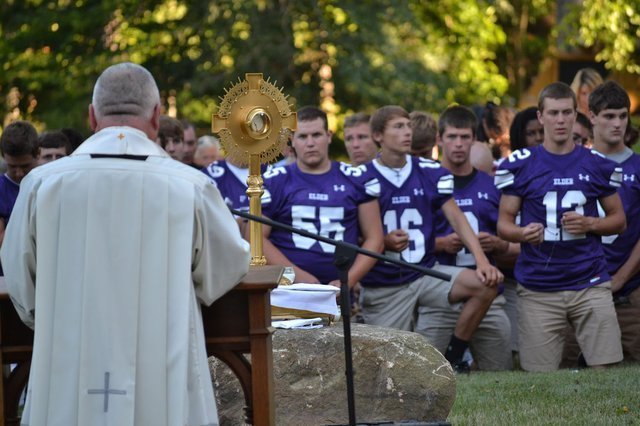 Players from Cincinnati Elder High School pray July 30 with Father Benedict O'Cinneslaigh of Mount St. Mary's Seminary of the West at the Athenaeum of Ohio. SportsLeader, a Louisville,Ky.-based coach training and formation company, has been organizing rosary rallies for high school football players across the nation.

Together, 350-plus boys clad in different-colored football jerseys resembled a mosaic as they sat or knelt on the grass at Cincinnati’s Mount St. Mary’s Seminary with rosaries in hand.

Eight teams, and an archbishop, gathered the night of July 30 for a SportsLeader Rosary Rally, a unique and growing event that brings high school football players from different teams together to pray the rosary before the Blessed Sacrament.

The original Cincinnati rally was the only one in 2014 but its success spawned a 2015 schedule with at least 20 rallies scheduled nationwide.

"We started showing the photos and explaining the story to cities across the country, saying this is what happened here and asking if they want to do something similar," said Lou Judd, director of SportsLeader. "Since then it’s been up, up and away."

Atlanta was one of the 20 cities hosting its first SportsLeader Rosary Rally this year.

"It was a special event to see them all kneeling and praying the rosary with the exposition of the Blessed Sacrament and benediction at the end," Turner said. "It is something our kids need to see more often and be involved in more often.

"These are schools we compete against … but it shows how we all came together as a Catholic group that night," he told The Catholic Telegraph, Cincinnati’s archdiocesan newspaper. "And for the non-Catholics, to see our Christian faith in everyone come together, it was a pretty neat event."

Judd said the rallies appeal to student athletes, male football players mostly so far, because it is a masculine environment where they feel natural and can witness to their faith. Players and coaches aren’t the only supporters.

Judd noted that Archbishop Joseph F. Naumann of Kansas City, Kansas, attended the rally in his city and Auxiliary Bishop Edward M. Rice of St. Louis attended the event in that city. Archbishop Dennis M. Schnurr of Cincinnati took part in the rally at his archdiocesan seminary.

"Through this rosary rally, we see that in fact coaches and school administrators are taking seriously their charge to make certain that every aspect of a Catholic school education is a mode of transmitting the faith," Archbishop Schnurr said.

In Cincinnati, home of one of SportsLeaders’ founders, Joe Lukens, every Catholic school of the archdiocese that plays football attended one of two rallies. Though SportsLeader targets Catholic schools for the rosary rallies, at least one public school has sent representatives.

Not every rally is the same size, but most follow the same format. Players, coaches and parents gather;a talk is given by a notable speaker;there is exposition of the Blessed Sacrament;and the rosary is prayed. Players get a free rosary and a prayer card of St. Sebastian, patron saint of athletes.

The rallies, Judd said, have a singular purpose.

"In my heart and the heart of everybody that’s in SportsLeader, we want to bring souls closer to Christ," he said. "That’s what we want. We just happen to love sports and want to have this as an avenue to do it. I love seeing these families and young men praying. I’m praying this plants a seed or inspires them to want to grow closer to Our Lord."

The goal is to eventually open the rallies to all sports, not just football. The rallies are growing outside of high school too as Cincinnati hosted a grade school rally that drew roughly 200 attendees.

With a four-person staff consisting of Judd, founders Paul Passafiume and Lukens and coach-mentor Chris Willertz, SportsLeader has grown to include more than 150 schools across the U.S. and Canada as clients in its training program. Nearly 50 teams have participated through the first eight rallies.

The story of the first rally was simple. Looking to do a large communal event for the 15 Catholic schools that play football within the Archdiocese of Cincinnati, Judd reached out to two coaches he knew to gauge interest. When they said yes, he scheduled the event.

"I asked (them) if we organized this, and it was free, would you bring your team," Judd recalled. "I said, ‘Let’s do it.’ Even if everybody else says no we’d have those two teams and it’s a start. Last year we had 11 teams."

Judd has used client contacts and cold calls to try and encourage more dioceses to participate, with SportsLeader assuming the brunt of the costs. Some dioceses have assisted financially, but like most ministries donations are always welcome.

Stegeman is editor of new media at The Catholic Telegraph, newspaper of the Archdiocese of Cincinnati.