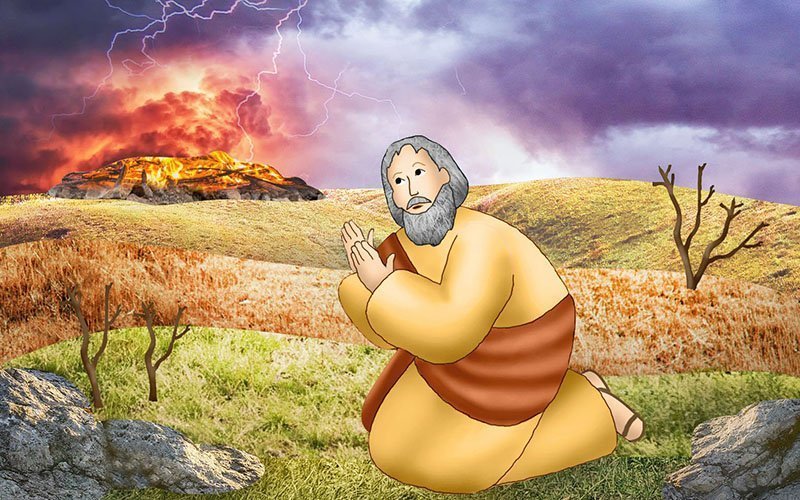 This is the artwork for Kids' Chronicle for Sept. 28, 2020. (CNS illustration by Linda Rivers)

A man named Job lived in the land of Uz. He was an upright man who feared God and avoided evil.
God had blessed Job with 10 children, thousands of head of livestock and a very large household, greater than anyone in the East.
One day, when the angels of God came to present themselves to God, Satan came with them.
“Have you noticed my servant Job?” God asked Satan, who had been roaming the earth and patrolling it. “There is no one on earth like him, blameless and upright, fearing God and avoiding evil.”
“Is it for nothing that Job is God-fearing? Have you not surrounded him and his family and all that he has with your protection?” Satan sneered. “But now put forth your hand and touch anything that he has, and surely he will blaspheme you to your face.”
“Behold,” God said, “all that he has is in your power; only do not lay a hand upon his person.”
Satan left God’s presence and set his sights on Job.
One day, a messenger came running to Job’s house. He told Job that the Sabeans had carried off the oxen and donkeys and killed the servants.
“I alone have escaped to tell you,” he said.
As the first messenger was speaking, a second rushed in to report that he was the only one to survive the lightning from heaven that had struck and consumed the sheep and servants.
A third messenger rushed in. He alone had escaped a raid by the Chaldeans, who had carried off the camels and killed the servants.
The fourth messenger had the most devastating news of all.
“Your sons and daughters were eating and drinking wine in the house of their eldest brother, and suddenly a great wind came from across the desert and smote the four corners of the house. It fell upon the young people, and they are dead,” he said.
Job arose, tearing his cloak and cutting off his hair. He fell to the ground and worshipped.
“The Lord gave and the Lord has taken away; blessed be the name of the Lord!” Job said.
Although Job was devastated by the messengers’ news, he did not sin or charge God with wrong.
READ MORE ABOUT IT:
Job 1
Q&A
1. Who wanted to test Job?
2. How did Job react to his losses?
TRIVIA: What skin condition did Satan give to Job? (Hint: Job 2:7)
Answer: Severe boils.

As we continue reading the Book of Job, we learn that God allowed Satan to continue to test Job.
For example, in Job 2, we read that Satan struck Job with a skin condition. Job sat in ashes and scraped his skin with shards of broken pots.
Job’s wife scorned him.
“Are you still holding to your innocence? Curse God and die!” she said.
“We accept good things from God; should we not accept evil?” Job replied without sinning against God.
Job’s three friends came to see him. They had intended to offer Job sympathy and comfort. Instead, in a series of long speeches, they presented all of the reasons why they thought Job had done something wrong in God’s eyes and had brought all of his suffering upon himself.
Through all of these trials, Job did not sin or complain against God.
In the last chapter of Job, we read that God admonished Job’s friends for speaking wrongly.
“You have not spoken rightly concerning me, as has my servant Job,” he said.
God also showed favor to Job by blessing him even more than before.
God made Job prosperous again, and he gave Job another 10 children.
Job lived to be 140, long enough to see his children, grandchildren and great-grandchildren.

St. Edward the Confessor was born in England in 1005 and became king in 1042.
Edward was gifted with patience, caution and flexibility, which made him a good leader. He defended England from its outside enemies and also from his internal opponents.
He cared for the poor and was generous to the church, and he also was known for his miracles.
When he died in 1066, he left a peaceful and stable country for his successor.
We remember Edward on Oct. 13.

Unscramble the words and arrange them to form a quotation from the children’s story:
het drol eb slebsed fo mane het
Answers: the Lord be blessed of name the
Blessed be the name of the Lord.
Copyright © 2022 Catholic Courier, Inc. All rights reserved. Linking is encouraged, but republishing or redistributing, including by framing or similar means, without the publisher's prior written permission is prohibited.