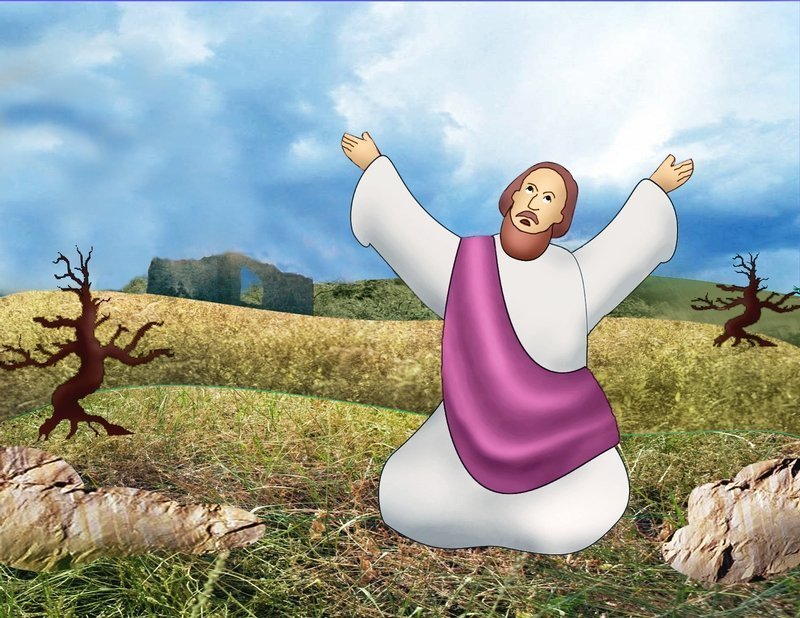 Once there was a man named Job. He was very righteous and always followed God’s laws. God loved him very much and gave him wealth and many children.

One day, the angels presented themselves to God. Guess who showed up as well? Satan! Remember, Satan was once an angel until he rebelled against God.

Satan told God he had been roaming the earth and patrolling it.

“Have you noticed my servant Job, and that there is no one on earth like him, blameless and upright, fearing God and avoiding evil?” the Lord asked.

Satan sneered. He told God that Job only followed him because God had been good to him.

“You have blessed the work of his hands, and his livestock are spread over the land,” Satan said. “But now put forth your hand and touch anything that he has, and surely he will blaspheme you to your face.”

God knew Job was a good and faithful servant. So he decided to allow Satan to test Job.

“Behold, all that he has is in your power; only do not lay a hand upon his person,” God said.

Satan rubbed his hands gleefully. He was excited to think that he could turn Job against God.

So Satan set to work. He caused raiders to steal Job’s oxen and donkeys, killing all but one herdsman, who escaped and told Job what had happened.

Just as the herdsman was done speaking, a shepherd ran up to Job. He had survived a lightning strike that killed the rest of the shepherds and all of Job’s sheep.

A third man rushed up to Job. The Chaldeans had carried off Job’s herd of camels and killed the animal tenders. The messenger was the only one to have lived.

Then the final messenger came.

Job’s sons and daughters had been eating at their eldest brother’s home. Suddenly, the man said, a powerful wind came across the desert and destroyed the four corners of the house, causing it to collapse.

All of Job’s children were dead.

Upon hearing this, Job tore his clothes in anguish and fell to the ground.

But, instead of cursing God, Job praised him.

“The Lord gave and the Lord has taken away; blessed be the name of the Lord!” Job said.

2. What news made Job fall to the ground?

The Book of Job is not the only place in the Bible where Satan tried to tempt others to sin.

In Genesis 3, the snake — which is identified with the devil — tempted Eve to eat the fruit from a tree in the Garden of Eden that God had said not to eat from. Eve ate the fruit and got Adam to as well. God punished them by banishing them from the garden.

In Acts 5, a Christian named Ananias sold his property so he could give all of the money to the apostles to give to believers in need. Instead, he sinned by keeping part of the money for himself and lying about it.

“Why has Satan filled your heart so that you lied to the holy Spirit and retained part of the price of the land?” the apostle Peter asked Ananias.

Satan even tried to tempt Jesus. In Luke 4, Jesus was in the desert for 40 days and nights. The devil came and tried to tempt Jesus into showing his power. He even offered to give Jesus power, if only Jesus would worship him. Jesus resisted the temptation and said, “You shall not put the Lord, your God, to the test.”

God knows the devil will always try to tempt us. That is why, in Matthew 6, Jesus taught us to pray for strength against temptation: “And do not subject us to the final test, but deliver us from the evil one.”

St. Osyth was raised in a nunnery in seventh-century England. She wanted to be a nun, but her parents said no. Instead, they arranged for her to be married.

When her husband realized that Osyth did not want to be his wife, he allowed her to become a nun. He gave her some land on which to build a monastery.

Unfortunately, the land was located in a dangerous place. One day, pirates tried to carry her off, and when she fought back, she was killed.