God calls Amos as one of his prophets - Catholic Courier 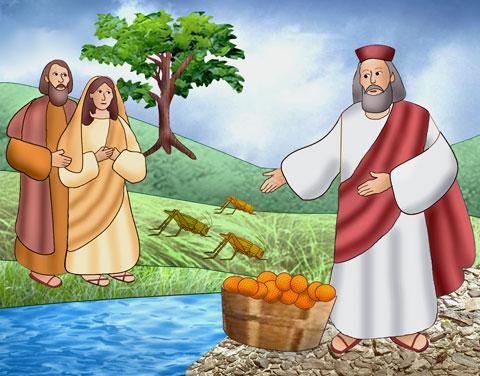 God calls Amos as one of his prophets

God calls Amos as one of his prophets

During the reign of Uzziah, King of Judah, and Jeroboam, King of Israel, there lived a man named Amos, who had been called by God to be a prophet. The Lord gave Amos words to speak to the people of all of Israel, wherever they lived. The Lord was angry with his people, and he wanted them to know his wrath would be firm against them when they sinned or turned away from God.

Amos declared the word of the Lord to the people of the different regions, from Aram to Tyre and from Ammon to Moab. For their crimes, he said, the Lord would not revoke his word, but he would punish them according to their deeds. In addition, God said he would send three woes upon Israel if they did not repent.

The first woe would be against those who “turn judgment to wormwood and cast justice to the ground!” As a result of this woe the Lord said, “… There shall be lamentation, and in every street they shall cry ‘Alas! Alas!'” For this, the Lord also offered a way to avoid his punishment: “Seek good and not evil, that you may live.”

The third and final woe was for “the complacent in Zion, to the overconfident on the mount of Samaria.” For these people, Amos asked a question, “Are you better than these kingdoms, or is your territory wider than theirs?” The Lord promised a swift judgment for the third woe. “Therefore, now they shall be the first to go into exile, and their wanton revelry shall be done away with. … Behold I am rising up against you, O house of Israel.”

Still Amos had visions from God about his anger with Israel. He saw swarms of locusts who were eating all of the grass in Israel. A basket of ripe fruit appeared before Amos, and the Lord told him, “The time is ripe to have done with my people Israel; I will forgive them no longer.”

The Lord also gave Amos a promise of hope for Israel: “I will bring about the restoration of my people Israel.”

READ MORE ABOUT IT:
The Book of Amos.

Q&A
1. Who would the first woe be sent upon?
2. What was God’s promise about Israel?

Amos lived at the same time as Isaiah, about 800 years before the birth of Christ, but he is not as familiar to as many Christians as Isaiah is. He preached about justice and the judgment and power of God. The Book of Amos may have been the first book of prophecy to have been written down, either by some of the followers of Amos or by other literate people who heard what Amos said and were able to write down his messages. This book reads more like a collection of poems than a narrative, which in many ways makes the words of God more vivid. Many of the short prophecies are introduced simply by the words, “Thus says the Lord.” Although much of the book deals with God’s anger toward Israel, he ends with a promise: “I will bring about the restoration of my people Israel.”

Vincent De Paul (1580-1660) grew up on a farm, but he was fortunate to be able to study at the University of Toulouse, and he was ordained a priest when he was only 20 years old. He served in a well-paying position as a chaplain of Queen Margaret of Valois, but he was accused of stealing from one of his friends. He denied it, but had to live under a shadow of suspicion until the real thief was caught several months later. Vincent became friends with an influential priest who helped him to become a tutor for the children of the Count of Joigny and spiritual director to the count’s wife. Vincent cared for the poor and the sick, and he raised money to help them and to build hospitals to provide medical care. He was canonized in 1737, and Pope Leo XIII later declared him the patron of charitable societies. We honor him on Sept. 27.