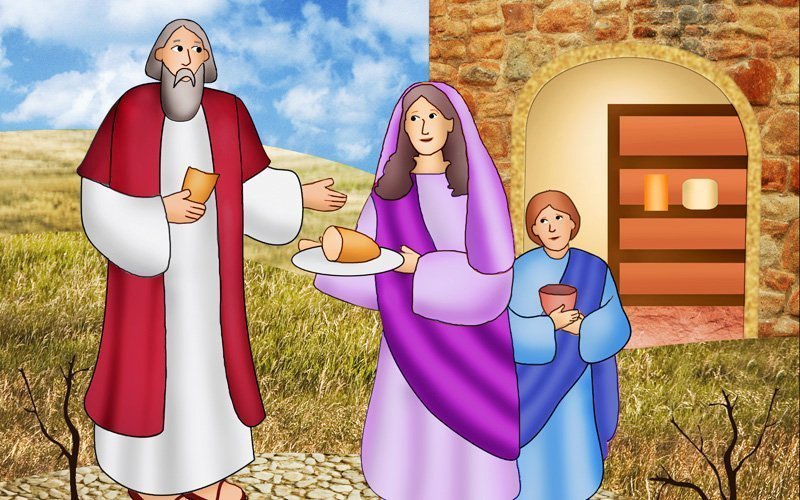 God was unhappy with King Ahab of Israel. Ahab was evil and did a lot of bad things, one of which was marrying Jezebel, a pagan who got the king to worship the false god Baal.

So the Lord sent his prophet, Elijah, to give Ahab a warning.

God said that no dew or rain would fall on the land for a long time. The dew and rain would only come again when God instructed Elijah to say so.

After Elijah delivered God’s message, God told him to go into hiding.

“Leave here, go east and hide in the Wadi Cherith, east of the Jordan,” God said. “You shall drink of the wadi, and I have commanded ravens to feed you there.”

Elijah had plenty to eat and drink at the Wadi Cherith. But, since there was a drought, the wadi — which is a stream bed that has water in it only during the rainy season — eventually dried up.

God had another plan for Elijah’s care.

“Arise, go to Zarephath of Sidon and stay there. I have commanded a widow there to feed you,” God told Elijah.

Elijah went to Zarephath. As he entered the city, he saw the widow, who was gathering sticks to make a fire. He called to the woman and asked for a cup of water. As she was leaving to get Elijah a drink, he also asked that she bring him a crust of bread.

“As the Lord, your God, lives, I have nothing baked; there is only a handful of flour in my jar and a little oil in my jug,” the widow replied. “Just now I was collecting a couple of sticks, to go in and prepare something for myself and my son; when we have eaten it, we shall die.”

Elijah told her to not be afraid and to make him a little cake before making something for herself and her son.

“For the Lord, the God of Israel, says, ‘The jar of flour shall not go empty, nor the jug of oil run dry, until the day when the Lord sends rain upon the earth,’” he said.

The widow did what Elijah asked. And just as God had said through Elijah, the widow’s jar of flour and jug of oil did not go empty, and she and her son had plenty to eat for a long time.

1. Where was the first place God told Elijah to hide?

2. Who was afraid of running out of flour and oil?

ESSAY: How do you show that you have faith in God?

God performed another miracle through Elijah while the prophet was staying with the widow in Zarephath.

One day, the widow’s son became very ill. He became sicker and sicker until he stopped breathing and died.

“Why have you done this to me, man of God?” the widow asked Elijah. “Have you come to me to call attention to my guilt and to kill my son?”

Elijah looked at the woman.

Elijah took the boy from his mother’s lap and carried him to the upper room of the house where the prophet had been staying. He laid the child on the bed and called out to God.

“Lord, my God, will you afflict even the widow with whom I am staying by killing her son?” Elijah cried.

He again called out to God.

“Lord, my God, let the life breath return to the body of this child,” Elijah prayed.

God heard Elijah’s prayer and returned the son to life. Elijah then brought the boy back downstairs to his mother.

“Now indeed I know that you are a man of God, and it is truly the word of the Lord that you speak,” the widow said to Elijah.

St. Felicitas was a Christian who lived in Italy in the second century. She is said to have been a widow who had seven sons.

Felicitas also was said to be very devoted to works of charity. She won many people to the faith, which greatly upset local pagan priests, who often complained about her.

Around the year 165, Felicitas was arrested for being a Christian. She was ordered to worship pagan gods or face death. After she refused to worship the false gods, the Roman emperor had her executed.

Felicitas was buried in the cemetery of Maximus on the Salerian Way in Rome, and we honor her on Nov. 23.