God excludes no one from his love; offers mercy, not hate, pope says - Catholic Courier 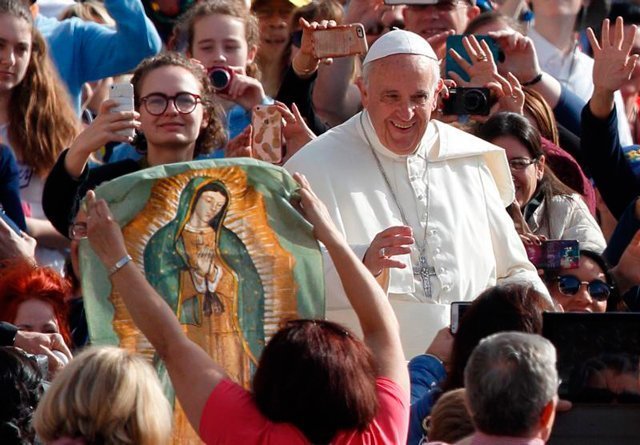 Pope Francis passes a banner of Our Lady of Guadalupe as he greets the crowd during his general audience in St. Peter's Square at the Vatican April 6.

The pope also met with and blessed the eyes of 5-year-old Lizzy Myers from Mansfield, Ohio.

Struck by a rare disease that is gradually rendering her deaf and blind, Myers was in Rome after a representative from Turkish Airlines heard about her story and offered her and her family free round-trip airfare to any city in the world.

Her parents, Steve and Christine Myers, had created a "visual bucket list" of places and things they wanted Lizzy to see before she loses her sight due to Usher Syndrome Type II A. They chose Rome and the Vatican to be their special destination because they are Catholic and because of the city’s artistic and historical riches, they told Associated Press.

After meeting with bishops and a few special delegations at the end of his general audience, Pope Francis went directly to Lizzy Myers, who was seated with her family in a section reserved for those with special needs. He leaned over her for several minutes, speaking with her and then laid his right hand over her eyes, offering his blessing.

During his general audience, the pope continued a series of talks dedicated to God’s mercy and reflected on how this mercy was fulfilled in Jesus.

The New Testament "is truly the ‘Gospel of mercy’ because Jesus is mercy," he said.

At every moment in his life, Jesus showed love to everyone: a love that is "pure, free and absolute," the pope said.

Jesus began his mission of mercy with his baptism in the Jordan River, the pope said, waiting in line "with the sinners, he wasn’t ashamed, he was there with everyone, with the sinners, to get baptized."

He could have begun his public ministry with lots of fanfare, "in the splendor of the temple," to the "blast of trumpets" or "in the garments of a judge," but he didn’t, the pope said. Instead he chose to be with the people, taking on "the human condition, spurred by solidarity and compassion."

His driving purpose was "to bring everyone the love of God who saves; Jesus didn’t bring hatred, he didn’t bring animosity, he brought us love, a great love, an open heart for everyone, for all of us," the pope said.

Jesus accompanied the least and the marginalized, sharing with them "the mercy of God who is forgiveness, joy and new life. The son sent by the father is truly the beginning of the time of mercy for all of humanity."

The great mystery of this love is seen in the crucified Christ, the pope said, because "it is on the cross that Jesus offered to the father’s mercy the sin of the world, everyone’s sins, my sins, your sins" and took those sins away.

"Nothing and no one remains excluded from this sacrificial prayer of Jesus," which means "we mustn’t be afraid to acknowledge and confess ourselves as sinners," he said.

"We are all sinners, but we are all forgiven," Pope Francis said. "We all have the possibility of receiving this forgiveness that is God’s mercy."

The sacrament of reconciliation, he said, gives the penitent heart "the strength of the forgiveness that flows from the cross and renews in our lives the grace of mercy that Jesus obtained for us."

People never need to fear their burdens and sins because "the power of love of the crucified one knows no obstacles and never runs out" as it wipes away human sin, he said.

When greeting special delegations at the end of his audience, the pope met with Cardinal Timothy M. Dolan of New York, who was heading to Iraqi Kurdistan to show solidarity with the church there. The cardinal, who is chairman of the board of the Catholic Near East Welfare Association, was traveling there with other members of CNEWA and church leaders.

The pope also met briefly with and posed for a group photo with members of a diocesan pastoral association in Italy for separated and divorced Catholics.

A representative of the group, "L’Anello Perduto," (the lost ring), had received a phone call from the pope in February, according to Vatican Radio, after group members sent a letter explaining their formation program and requesting a papal audience.