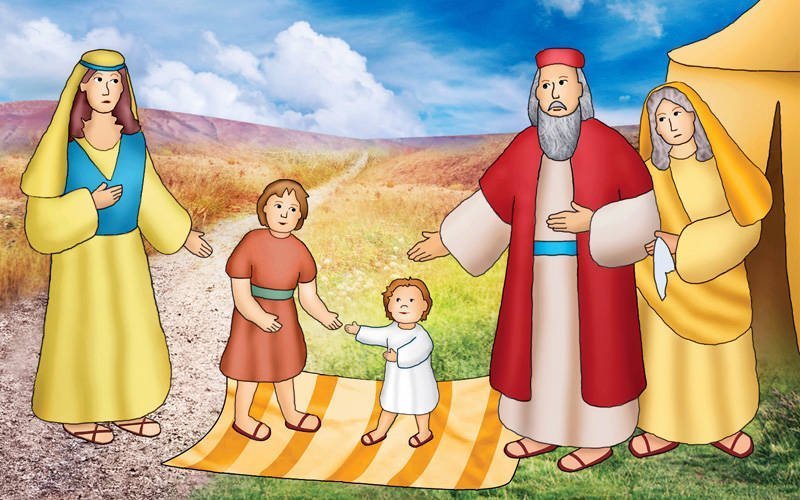 Abraham and his wife, Sarah, were very old, and they did not have any children.

Sarah decided that her slave, Hagar the Egyptian, would become Abraham’s wife. Abraham and Hagar had a son named Ishmael.

Several years later, God appeared to Abraham and told him that Sarah would have a son the following year.

“God has given me cause to laugh, and all who hear of it will laugh with me,” Sarah said. “Who would ever have told Abraham that Sarah would nurse children! Yet I have borne him a son in his old age.”

Isaac grew, and when he was weaned, Abraham held a great banquet.

“Drive out that slave and her son!” Sarah demanded of Abraham. “No son of that slave is going to share the inheritance with my son Isaac!”

Abraham became greatly distressed, but God told him not to worry.

“Heed the demands of Sarah, no matter what she is asking of you,” God said, “for it is through Isaac that descendants shall bear your name. As for the son of the slave woman, I will make a great nation of him also, since he too is your offspring.”

The next morning, Abraham gave Hagar some bread and water. He placed Ishmael on her back and sent her away.

Hagar wandered in the wilderness of Beer-sheba until she ran out of water. Then she put Ishmael down under a shrub and sat down opposite him.

“Let me not watch to see the child die,” Hagar said to herself as Ishmael started to cry.

“What is the matter, Hagar?” God’s messenger called from heaven. “Don’t be afraid; God has heard the boy’s cry in this plight of his. Arise, lift up the boy and hold him by the hand; for I will make of him a great nation.”

God opened Hagar’s eyes, and she saw a well of water. She filled her waterskin and gave Ishamael a drink.

And, as God promised, he was with Ishmael as he grew up.

1. Who were Abraham’s two sons?

TRIVIA: What were Abraham and Sarah’s names before God changed them? (Hint: Genesis 17:5, 15)

In Genesis 22:1, we read that when Isaac was a young boy, God decided to test Abraham.

God told Abraham to take Isaac to the land of Moriah and offer him as a burnt offering.

The next morning, Abraham saddled his donkey, cut some wood, and set out with Isaac and two servants.

On the third day of travel, Abraham saw the place where God wanted him to go. He told the servants to stay behind while he and Isaac went to worship God.

When Abraham and Isaac came to the place of which God had spoken, Abraham built an altar, arranged wood on it and placed Isaac on the wood.

As Abraham reached for his knife, a messenger of God called from heaven.

“Do not lay your hand on the boy,” the messenger said. “For now I know that you fear God, since you did not withhold from me your son, your only one.”

Abraham then saw a ram caught by its horns in the thicket and offered it as a burnt offering.

“Because you acted as you did in not withholding from me your son … I will bless you and make your descendants as countless as the stars of the sky and the sands of the seashore,” the messenger told Abraham.

St. Hedwig was born in 1373 to King Louis of Poland and Hungary and his wife, Elizabeth of Bosnia.

As queen, Hedwig dealt with many revolts and tried to find peaceful solutions to conflicts. She encouraged perpetual adoration and helped to unite Latin and Orthodox Christians.

Using the hints provided, answer the questions about Abraham.