God gives his people water from a rock - Catholic Courier 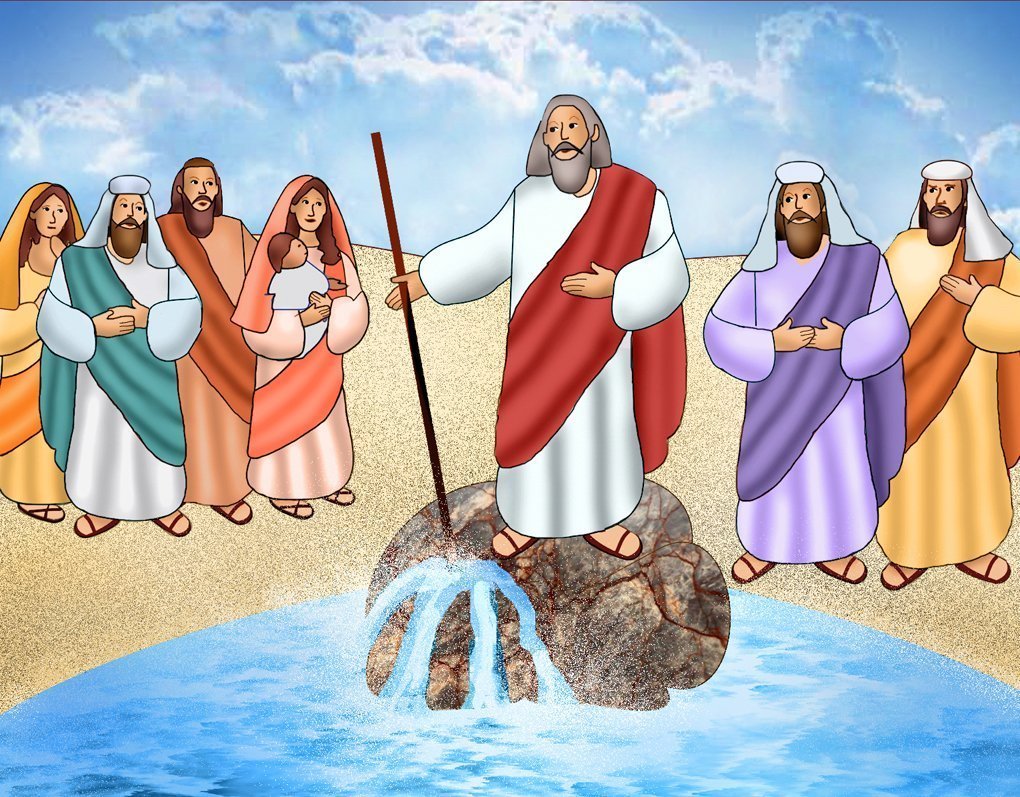 God gives his people water from a rock

God gives his people water from a rock

After enduring the searing heat of the desert of Sin, the people of Israel traveled as the Lord commanded them and they stopped and made camp in Rephadim. The Israelites were thirsty, and there was no water to be found at this campsite. They complained to Moses, who was their leader. “Give us water to drink!”

“Why do you quarrel with me,” Moses asked them. He was growing impatient with their complaining and he did not want them to make the Lord angry. “Why do you put the Lord to a test?” This answer did not satisfy the people’s resentment. They said to Moses, “Why did you ever make us leave Egypt? Was it just to have us die here of thirst with our children and our livesock?”

Moses was discouraged. The people he loved were thirsty, and he had no water to give them. He also knew he had followed the Lord’s directions, so what was he to do? He cried out to the Lord for help. “What shall I do with this people? A little more and they will stone me.”

The Lord was not going to let anything happen to Moses or his people. He had led them from their slavery in Egypt and he was bringing them to a promised land that would be their own. When they were hungry, he sent them quail and manna to eat. Now that they were thirsty he was going to give them water and a demonstration of his love and his power.

He said to Moses, “Go over there in front of the people, along with some of the elders of Israel, holding in your had as you go the staff with which you struck the river. I will be standing there in front of you on the rock in Horeb. Strike the rock and the water will flow from it for the people to drink.”

Moses went to find his staff and he called the elders of the people to join him by the rock the Lord had indicated. He said a prayer and then he struck the rock with his staff as the Lord had instructed him. Immediately, fresh, cool water flowed out of the rock.

The name of the place where this miracle took place was called Massah and Meribah, because there the people tested the Lord and argued among themselves.

READ MORE ABOUT IT:
Exodus 17

Q&A
1. Why were the people complaining to Moses?
2. What happened when Moses struck the rock?

Over the passing of thousands of years, erosion, the formation of settlement and construction of new cities on the sites of old cities. Archeologists and other scholars have dug deep into some of these ruins to learn about the cultures of people who have lived across the centuries. Each such successive layer is called a stratum. The deeper into the dirt and sediment, the older the civilization. In a archeological site in Jerusalem, scientists discovered pottery and stone walls that date back to about 100 years after the birth of Jesus. As they dug deeper, they found the ruins of a house from the time of Isaiah. Further digging revealed relics from the time of Moses and Abraham and further back to the time of the building of the pyramids, between 2,000 and 3,000 years before the birth Jesus.

When he was thirtyfive years old, Romanus (d. 460) decided to live as a hermit. He packed only a few simple tools and seeds to plant and he found a secluded spot under a large tree in the mountainous area between Switzerland and France. He spent many hours every day in prayer, and he cared for the field in which he had planted his seeds. But even in such a remote place, others heard of him, and came to join him in his life of devotion to God in nature. His brother became his partner, and his sister also worked with them. When it seemed that more permanent dwellings were needed, Romanus and his brother founded a monastery for the men and a nunnery for the women. The religious community lived simply, often enduring hardship from the weather.

Romanus once made a pilgrimage to where the Theban Legion had been martyred and healed two lepers along the way. Romanus died in 460, and we honor him on February 28.