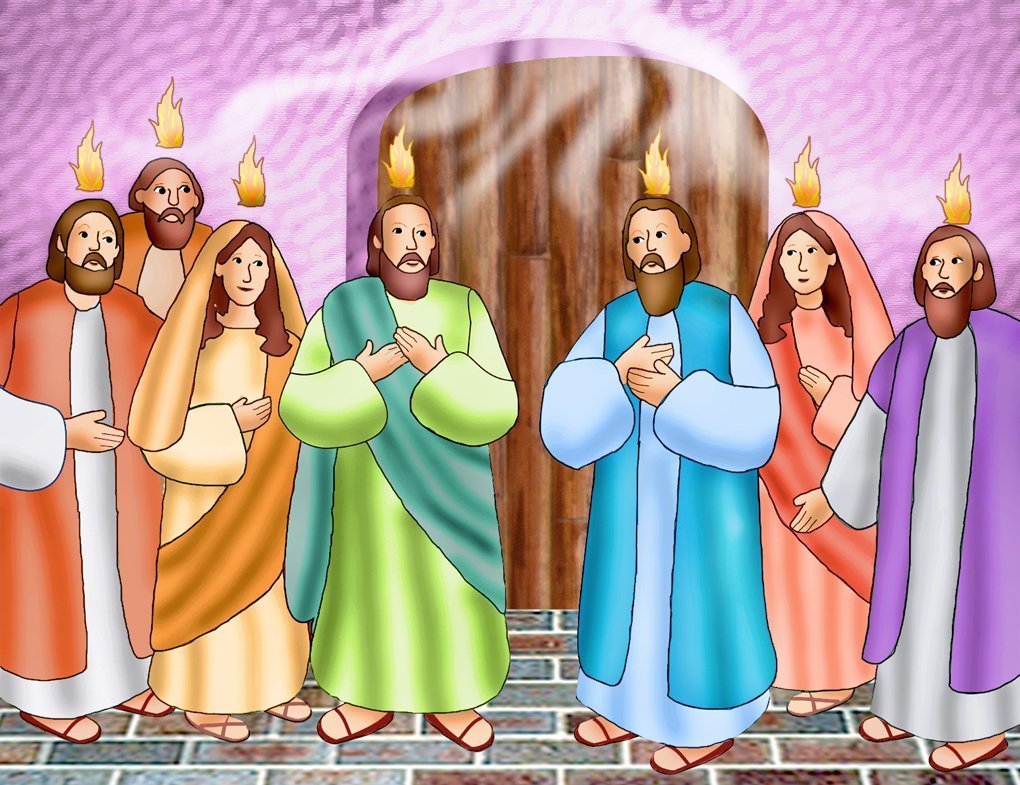 Bible Accent: Acts of the Apostles

On the day of Pentecost, the Apostles who had followed Jesus and others who came to believe in him, were in one place, praying together. A mighty wind came down from the sky and filled the house, and tongues of fire appeared above the heads of everyone there. They all began to speak as the Holy Spirit moved them.

A large crowd gathered outside the house. People had come to Jerusalem from all over the world to celebrate Pentecost, and they wondered what was happening. “Are not all these people who are speaking Galileans?” someone asked. “Then how does each of us hear them in his own native language?”

“What does this mean?” another man asked. Not everyone who heard thought a miracle was happening. “They have had too much new wine,” a skeptic said.

Then Peter stood up to address the people who had come. “Let this be known to you,” he said, “and listen to my words. These people are not drunk, as you suppose, for it is only nine o’clock in the morning. No, this is what was spoken through the prophet Joel: ‘It will come to pass in the last days. … I will pour out a portion of my spirit upon all flesh. Your sons and your daughters shall prophecy. … And I will work wonders in the heavens above and on the earth below.’”

Some of the people who heard Peter dismissed his words, and left the crowd.

Many others remained to hear what he might say. Peter spoke very directly to the crowd. “You who are Israelites, hear these words. Jesus the Nazorean was a man commended to you by God with mighty deeds, wonders, and signs, which God worked through him in your midst, as you yourselves know. This man, delivered up by the set plan and foreknowledge of God, you killed, using lawless men to crucify him. But God raised him up, releasing him from the throes of death, because it was impossible for him to be held by it.”

Peter reminded the people that David was a prophet who lived and died, but who knew a Messiah would come from the family of one of his descendants. Then, to make sure everyone understood exactly what he was trying to say, Peter said, “Therefore let the whole house of Israel know for certain that God has made him both Lord and Messiah, this Jesus whom you crucified.”

READ MORE ABOUT IT:
Acts 2

Q&A
1. On what day were the Christians praying together?
2. What did Peter want the people to know Jesus was?

Bible Accent: The Acts of the Apostles

The Acts of the Apostles was written by Luke, who also wrote one of the Gospels. This book reads like a great adventure, opening with the ascension of Jesus into heaven and recording many of the important events of the lives of the early Christians. After the Holy Spirit came upon the disciples on the Day of Pentecost, they were empowered to spread the good news of Jesus to the Gentiles as well as the Jews. The disciples healed people, just as Jesus did; Stephen became the first Christian martyr; and many people were baptized and became believers. The story of Paul’s conversion from a persecutor of Christians to a dynamic missionary also is included in Acts. Paul later wrote many of the letters that are included in the New Testament.

Hermenegild (d. 585) was the son of King Leovigild of Spain. He was not raised a Christian, but he married a devout Catholic woman. She showed by the way she lived that she was a woman of God, and Hermenegild became a Catholic as a result of her example. He also received religious instructions from Leander, the Archbishop of Seville. His father was angry, and father and son went to war with each other. Hermenegild asked for help from Roman generals and their soldiers. The Romans betrayed Hermenegild and kidnapped his wife and young child. His father made an offer of peace, and Hermenegild accepted. Before long he was ordered to recant his faith, but he refused and was put in prison and later executed. We honor him on April 13.