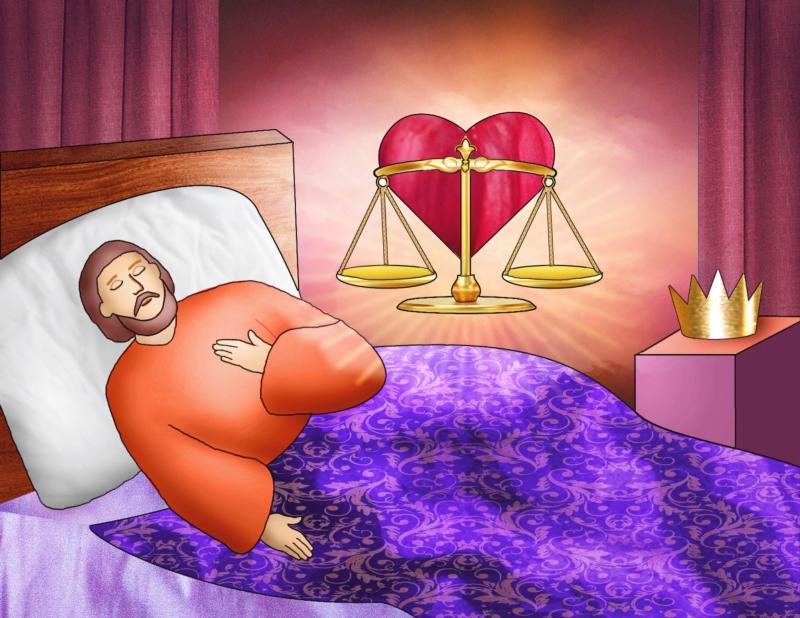 This is the artwork for Kids' Chronicle for July 26, 2020. (Illustration by Linda Rivers)

Not long before he died, King David fulfilled a promise that he had made to his wife Bathsheba.

Even though their son, Solomon, was one of David’s younger children, David made Solomon his successor as king of Israel.

David advised Solomon to keep God’s statutes, commands, ordinances and decrees as written in the law of Moses so that Solomon would succeed in whatever he did.

After David died and Solomon established his kingship, the new king went to Gibeon to sacrifice on the high place there. At that time, the people scarified on the high places because a temple had not yet been built for God.

While Solomon was in Gibeon, God appeared to him in a dream.

“Ask something of me and I will give it to you,” God said.

“O Lord, my God, you have made me, your servant, king to succeed my father David; but I am a mere youth, not knowing at all how to act. … Give your servant, therefore, an understanding heart to judge your people and to distinguish right from wrong,” Solomon replied.

“Because you have asked for this — not for a long life for yourself, nor for riches, nor for the life of your enemies, but for understanding so that you may know what is right — I do as you requested,” God said. “I give you a heart so wise and understanding that there has never been anyone like you up to now, and after you there will come no one to equal you.”

God didn’t stop there, however.

“In addition,” God said, “I give you what you have not asked for: I give you such riches and glory that among kings there will be no one like you all your days. And if you walk in my ways, keeping my statutes and commandments, as David your father did, I will give you a long life.”

When Solomon awoke, he went to Jerusalem, stood before the ark of the covenant of the Lord, sacrificed burnt offerings and communion offerings, and gave a feast for all his servants.

1. Who talked to Solomon in a dream?

2. What did Solomon ask God for?

TRIVIA: Which of David’s older sons thought he would become king? (Hint: 1 Kings 1:5)

Why didn’t King David build a temple for God?

In 1 Chronicles 17, we read that King David had a conversation with the prophet Nathan.

“See, I am living in a house of cedar, but the ark of the covenant of the Lord is under tentcloth,” David remarked.

Nathan told David that God was with him and to do what was in his heart.

But that night, the word of God came to Nathan.

“Go and tell David my servant, ‘Thus says the Lord: It is not you who are to build the house for me to dwell in,'” God told Nathan.

God said that when David died, he would raise up one of David’s sons and establish his kingdom.

“He it is who shall build me a house, and I will establish his throne forever,” God wanted David to know. “I will be a father to him, and he shall be a son to me. … I will maintain him in my house and in my kingdom forever, and his throne shall be firmly established forever.”

In 1 Chronicles 22, we read that David began to collect the materials that would be needed to build a temple. And he also summoned his son Solomon and commanded him to build a house for the Lord once he became king.

The eldest child of Scottish immigrants, St. Mary Helen MacKillop was born in Australia in 1842.

Mary worked with children as a governess. With encouragement from her priest-adviser, she founded Australia’s first religious order, the Sisters of St. Joseph of the Sacred Heart.

Taking the name Mary of the Cross, she worked to open women’s shelters, as well as schools and orphanages for poor, rural children. The order was approved by the pope in 1888.

Using the hints provided, circle the correct answer to each question about King Solomon.

2. In what year of Solomon’s reign did he begin to build the Temple? fourth/eighth (1 Kings 6:1)