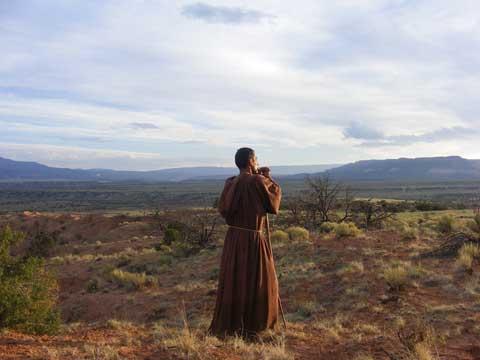 A Franciscan monk is pictured in New Mexico in a scene from the upcoming PBS documentary series "God in America."

NEW YORK — “Americans,” observed Alexis de Tocqueville, writing in the early days of the Republic, “combine the notions of religion and liberty so intimately in their minds that it is impossible to make them conceive of one without the other.”

The crucial influence of faith in shaping U.S. history, and in molding the national character, receives a searching analysis in the six-hour miniseries “God in America.” The documentary — a joint presentation of “Frontline” and “American Experience” directed by David Belton — premieres on PBS stations Monday, Oct. 11, 9-11 p.m. EDT (check local listings).

Through interviews with scholars, archival images and dramatizations, the initial episode screened recounts how the religious heritage of the Old World — first brought to the future United States by Catholic missionaries moving north from Mexico — was radically reshaped by a series of all-too-worldly conflicts among believers of various stripes.

Puritan leader John Winthrop’s rejection of Anne Hutchinson’s innovative views, which resulted in her banishment from the Massachusetts Bay Colony he ruled as governor, for instance, is portrayed as having at least as much to do with Winthrop’s desire for social cohesion in the fledgling community as with any zeal for Calvinist doctrinal purity.

Similarly, the individually focused preaching of evangelical pioneers such as George Whitefield was perceived as a threat to the power and financial security of Anglicanism, the established religion of the Southern colonies. A third struggle, pitting Virginia Baptists against that commonwealth’s Anglican Church, saw Thomas Jefferson enter the fray on the side of the Baptists, some of whom had been imprisoned for preaching without a license.

A few decades after the religious freedom Jefferson championed had been enshrined in the Bill of Rights, Protestant Americans’ loyalty to this cornerstone principle was put to the test by the arrival of large numbers of Catholic immigrants in their midst.

Nativist prejudice led to riots and to a more peaceful, but nonetheless significant, battle over the denominational slant of the curriculum in New York City’s public schools. Leading the Catholic forces in this crusade was the city’s dauntless first archbishop, John Hughes (1797-1864).

The program presents Hughes as a sympathetic figure, eloquently appealing to his Protestant fellow countrymen to live up to their constitutional responsibilities.

But his use of his office to sway voters — Hughes explicitly endorsed a slate of candidates in the 1841 elections for the New York State Legislature — is treated as problematic. Some viewers may perceive a subtext here implying narrow constraints on the church’s proper role in the political debates of our own day.

A much earlier incident, a disastrously unsuccessful Franciscan-led effort to evangelize the Pueblos of New Mexico, comes in for predictable criticism as the script rather naively applies 21st century values to the Age of Discovery. It suggests, moreover, that the friars were cruelly narrow-minded not to accept the Pueblos’ improvised mingling of Christianity and paganism.

While this neutral perspective, which carries with it the assumption that all religions are either equally true or equally false, may rankle with believers, the historical value of “God in America” is undeniable, informatively tracing as it does the complex process by which the steady irritant of dissent and disagreement gave birth to the pearl of religious liberty.

The sophisticated issues under study, and the maturity required to sort through them — together with briefly seen artwork featuring Adam and Eve sans fig leaves — mark this as best for religiously well-grounded adults.