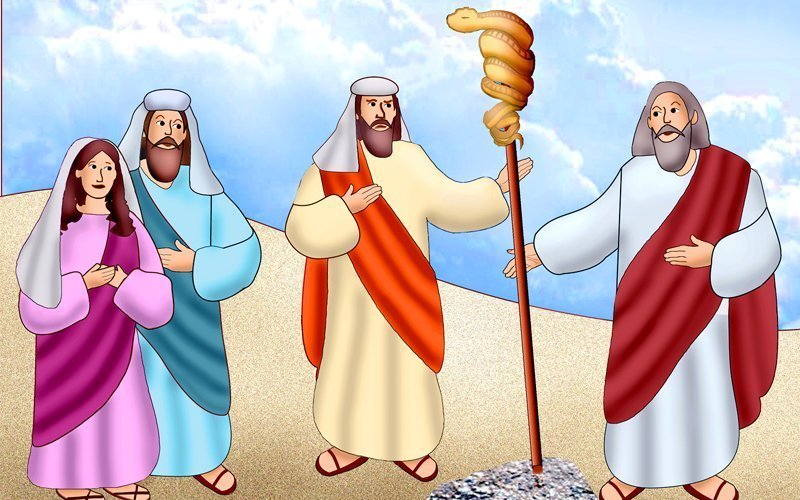 The way out of Egypt was not easy for the Israelites. God had used Moses to lead them out of slavery, but they had no place to call home. They wandered, looking for the place God promised would be theirs when they reached it.

Along the way, they encountered many difficulties. The Canaanite king of Arad saw the Israelites, attacked them and took some of them as prisoners. But God heard the prayers of his people and delivered them all from the Canaanites.

The Israelites continued to wander. From Mount Hor to the Red Sea Road, beyond the land of Edom. The people were tired and they complained to Moses.

“Why have you brought us up from Egypt to die in this desert, where there is no food or water? We are disgusted with this wretched food.” When the Lord heard the grumbling of the Israelites, he sent serpents which bit them, and many died from the poisonous stings. The people realized they had offended God, so once again they went to Moses. “We have sinned in complaining against the Lord and you,” they said. “Pray the Lord to take the serpents from us.”

Moses prayed on behalf of his people and the Lord gave him an answer. “Make a saraph,” the Lord said, “and mount it on a pole, and if anyone who has been bitten looks at it, he will recover.”

So Moses made a saraph, that is a serpent forged out of bronze, and mounted it on a pole as the Lord had told him. Just as the Lord had promised, anyone who had been bitten who looked toward the pole was healed. After this time of disobedience, repentance and healing, the Israelites continued to wander in the desert. After a time they came to the land of the Amorites. The Israelites sent a message to Sihon, the king. “Let us pass through your country. We will not turn aside into any field or vineyard, nor will we drink any well water, but we will go straight along the royal road until we have passed through your territory.”

The king refused to let the Israelites pass and waged war against them, but the Lord was with them. They defeated the king and took possession of much of his land.

READ MORE ABOUT IT:
Numbers 21

Q&A
1. What happened after the people complained to Moses?
2. How were the people bitten by the serpents healed?

The United States Conference of Catholic Bishops has identified seven key themes to consider when getting involved in social, political and moral issues. They are the right to life and the dignity of the human person; call to family, community and participation; rights and responsibilities; option for the poor and vulnerable; dignity of work and the rights of workers; solidarity; and caring for God’s creation.

In their conclusion the bishops “call for a renewed politics that focuses on moral principles, the defense of life, the needs of the weak and the pursuit of the common good.”

Let us always strive to be good Catholic citizens.

Joseph Desa (1603-1663) was born into a very poor family in Italy. The family was poor, and his widowed mother often was mean to him. He became angry very easily and walked around as if he were lost.

Yet he was very interested in religion and he wanted to join an order. The Conventual Franciscans refused him, and the Capuchins dismissed him because of his lack of discipline. With the help of an uncle, he was given the job of servant in a Conventual Franciscan monastery. There he showed discipline and devotion in his new task.

He was eventually allowed to join the order, and he became a priest in 1628. Several miracles are attributed to him. We honor him on Sept. 18.