God punishes the Israelites for their sinfulness - Catholic Courier 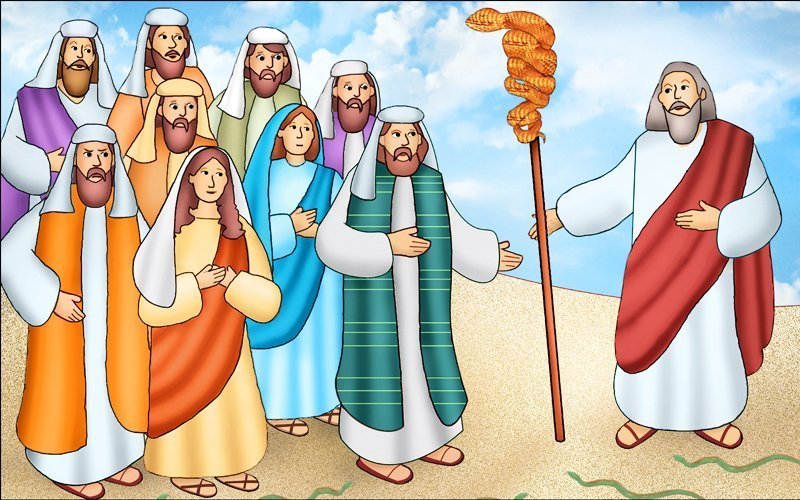 God punishes the Israelites for their sinfulness

God punishes the Israelites for their sinfulness

After he had freed the Israelites from slavery in Egypt, God wanted to make them a holy people with the help of his servant, Moses.

Moses had a pretty tough job. The people were always sinning against God by complaining, failing to follow his directions and laws, and by not trusting in him.

God eventually would become angry and punish the people for their sinfulness. The people would repent and ask Moses to pray to God for forgiveness, which God always granted.

Although God always forgave his people, he also gave them consequences for their sinful actions.

For example, a couple of years after being freed from slavery, God led the people to the border of Canaan, the land which God had promised them.

God had Moses send out 12 scouts to check out the land. When they came back 40 days later, 10 of the 12 scouts said that the Israelites were not strong enough to take the land from the inhabitants. The people believed them and rebelled against Moses and God.

Since the people sinned by not trusting God, he made them wander the desert for 40 years before entering the land.

Near the end of this time, the Israelites were getting worn out from the journey. They once again complained to Moses.

“Why have you brought us up from Egypt to die in this desert, where there is no food or water? We are disgusted with this wretched food!” they cried.

As a punishment for their sinfulness, God sent poisonous seraph serpents to bite the people, and many of them died.

The people realized they were sinning and begged Moses to help them.

“We have sinned in complaining against the Lord and you,” they said. “Pray the Lord to take the serpents from us.”

Moses did, and God told him to make a bronze serpent and place it on a pole. All who had been bitten would be healed if they gazed upon the bronze serpent, God said.

Moses obeyed God, and, just as God had promised, those who were bitten and gazed upon the bronze serpent recovered.

1. Why did the Israelites wander the desert for 40 years?

2. What type of animal bit the Israelites?

ESSAY: Why is it important to trust in God?

Although Moses was God’s faithful servant, even he once sinned against God.

In Numbers 20, we read that the people were complaining about not having water to drink. So Moses and his brother, Aaron, asked God what to do.

God told Moses to take his staff and assemble the people. God said to speak to a rock and water would flow out of it.

“Just listen, you rebels!” Moses angrily said to the people. “Are we to produce water for you out of this rock?”

Moses then struck the rock twice with his staff, and a huge amount of water began to flow.

But God was not pleased with what Moses had done.

“Because you did not have confidence in me, to acknowledge my holiness before the Israelites, therefore you shall not lead this assembly into the land I have given them,” God told Moses.

Although Moses was given consequences for his sinful actions, he still loved and obeyed God. He did as God asked and led the people to the Promised Land.

Although God did not allow Moses to cross into the land, in Deuteronomy 34 we read that he had Moses climb Mount Nebo so he could see the land before he died.

From 1605-07 he was a slave in Tunisia after he was seized from a ship that pirates had attacked. After escaping his captors, he returned to France and worked in a parish outside of Paris.

Around 1615, he dedicated his life to serving the poor. He founded the Confraternity of Charity, the Congregation of the Mission (Vincentians) and, with St. Louise de Marillac, the Daughters of Charity.