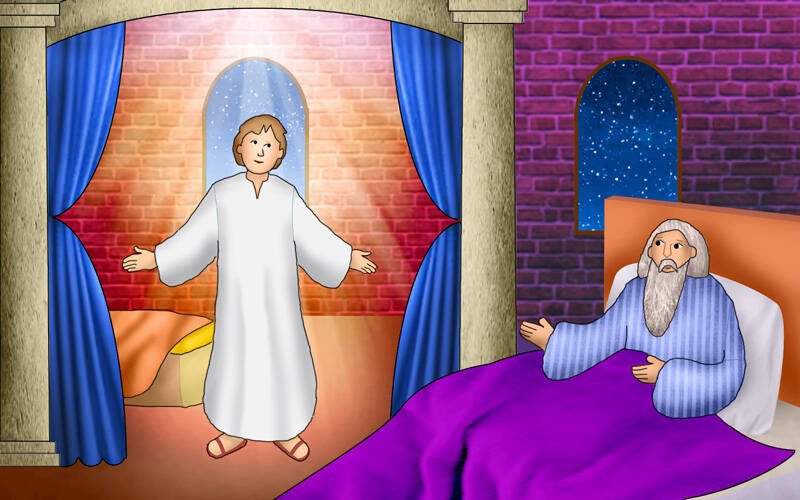 Elkanah, a man from the hill country of Ephraim, had two wives, Hannah and Peninnah. Peninnah had children, but Hannah had none. Peninnah picked on Hannah because she was childless, which made Hannah very upset.

Every year, Elkanah and his family went to the temple in Shiloh to offer sacrifices to God. One year, Hannah poured out her troubles in prayer and asked God for a son. She promised that the boy would be dedicated to God’s service.

God heard Hannah’s prayer. She had a son named Samuel, whom she brought to the temple in Shiloh after he was weaned.

Samuel became minister to the Lord under the priest Eli. During this time, a revelation of the Lord was uncommon, and visions were infrequent.

One night, Eli was asleep in his usual place, and Samuel was sleeping in the temple where the ark of God was.

The Lord called to Samuel.

“Here I am. You called me,” Samuel said after running to Eli.

Samuel went back to sleep. God again called to Samuel, who again ran to Eli and said, “Here I am. You called me.”

The Lord called Samuel for a third time. Getting up and going to Eli, he said, “Here I am. You called me.”

“Go to sleep, and if you are called, reply, ‘Speak, Lord, for your servant is listening,’” Eli said.

When Samuel went to sleep, the Lord came and stood there, calling out as before: “Samuel, Samuel!”

“Speak, for your servant is listening,” Samuel replied.

God told Samuel that he would carry out everything he had previously said about Eli and his family.

“I announce to him that I am condemning his house once and for all, because of this crime: Though he knew his sons were blaspheming God, he did not reprove them,” God said.

The next morning, Eli asked what God had said. He told Samuel to hold nothing back, so Samuel told him everything.

As Samuel grew up, the Lord was with him, and he became known as a prophet of God.

1. Who was calling Samuel?

2. Who was God condemning?

Have you ever been afraid to deliver bad news to someone?

At the time that God revealed himself to Samuel, the Philistines gathered for an attack on Israel.

In 1 Samuel 4:2, we read that after a fierce battle, the Philistines prevailed, and Israel lost about 4,000 men.

“Why has the Lord permitted us to be defeated today by the Philistines?” the elders of Israel asked when the troops returned to camp. “Let us fetch the ark of the Lord from Shiloh that it may go into battle among us and save us from the grasp of our enemies.”

Word was sent to Shiloh for the ark to be brought to the camp. Eli’s two sons, Hophni and Phinehas, accompanied the ark. Eli’s sons were wicked. They had no respect for God and sinned grievously in his presence. They also had no respect for their priestly duties toward the people.

The two armies clashed again, and Israel was defeated once more. This time, 30,000 men were lost, Eli’s sons were killed and the Philistines captured the ark of God.

A man fled the battlefield and went to Shiloh to announce the news. When Eli heard that his sons were dead and the ark of God was captured, he fell backward from his chair and died.

And just as God told Samuel, the house of Eli was condemned because Hophni and Phinehas blasphemed God and Eli did not reprove them.

St. Fabian was a Roman layman who lived in the third century. He attended a papal conclave as an observer in 236 and was elected pope after a dove landed on his head.

He was among the first to be martyred during the Roman Emperor Decius’ persecution of Christians. St. Cyprian called Fabian “an incomparable man, the glory of whose death corresponded with the holiness of his life.”

Answers: to, sleep, back, go

Go back to sleep.