God speaks to Moses from a burning bush - Catholic Courier 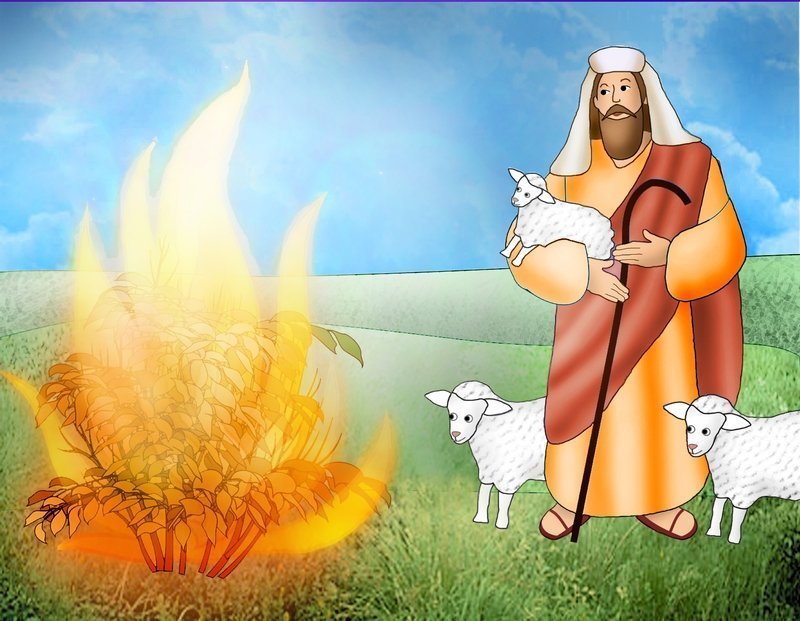 God speaks to Moses from a burning bush

God speaks to Moses from a burning bush

During a time when the people of Israel were slaves in the land of Egypt, a man named Moses was tending a flock of sheep in the land of Midian. He was watching the flock for Reuel, who also was called Jethro. This man was Moses’ father-in-law, the priest of Midian.

Moses led the flock through the wilderness and eventually came to Mt. Horeb, which was called the mountain of God.

As Moses guided the sheep toward the mountain, he saw a curious sight. There in front of him was a bush that had flames shooting out of it. As Moses continued to look, he noticed that as the fire continued to burn, the bush remained whole. The fire did not destroy it.

Moses walked up to the bush with a look of wonder. He just had to get closer so he could figure out what was going on.

As Moses drew near, God noticed he was coming and spoke to him from the center of the burning bush.

“Here I am,” Moses answered.

God warned Moses not to come too close to the bush: “Remove the sandals from your feet, for the place where you stand is holy ground.”

God then explained that he was the God of Moses’ ancestors, Abraham, Isaac and Jacob.

As God spoke, Moses became frightened and hid his face. He was afraid to look at God.

But the Lord continued to speak to him. He had a very special assignment for Moses.

“I have witnessed the affliction of my people in Egypt and have heard their cry against their taskmasters, so I know well what they are suffering,” God told Moses. “Therefore I have come down to rescue them from the power of the Egyptians and lead them up from that land into a good and spacious land, a land flowing with milk and honey. … Now, go! I am sending you to Pharaoh to bring my people, the Israelites, out of Egypt.”

“Who am I that I should go to Pharaoh and bring the Israelites out of Egypt?” he asked.

God promised to be with Moses. The Lord told him what to say to the elders of Israel so they would know God had sent Moses to rescue them from the Egyptians.

1. Where was God’s voice coming from?

Moses was not always a shepherd, and he did not always live in the land of Midian.

Moses was an Israelite who was born in Egypt during a time when his people were slaves in that country. Also during that time, the Egyptian leader, or pharaoh, ordered that all of the Israelites’ newborn male children be killed.

When Moses was born, his mother hid him until he was too big to hide any longer. Then she put him in a papyrus basket and placed it in some reeds in the Nile River. Pharaoh’s daughter found the basket and saw the crying baby inside. She realized the baby was a Hebrew child and felt sorry for him. She decided to adopt Moses and raise him as her own son.

As Moses grew up, he saw how miserable the Israelites were. One day he killed an Egyptian man who was beating an Israelite slave. When Pharaoh found out, he wanted to kill Moses, so Moses escaped to Midian.

It was there that Moses met Jethro’s seven daughters. He eventually married one of the daughters and began working for his father-in-law.

John Ogilvie (d. 1615) was born into a Scottish family and was raised a Protestant. Even so, at age 17, he decided to become a Catholic. He attended several colleges, and after attending a Jesuit college, he decided to join that order. He was ordained a priest in Paris in 1610.

He asked to perform mission work in Scotland, a Protestant county in which it was illegal to practice the Catholic faith. He converted many people to Catholicism. One day, someone pretending he wanted to become Catholic asked to meet John in the marketplace. He was captured and tortured. He was convicted of treason and hanged in Glasgow.

We remember him on March 10.