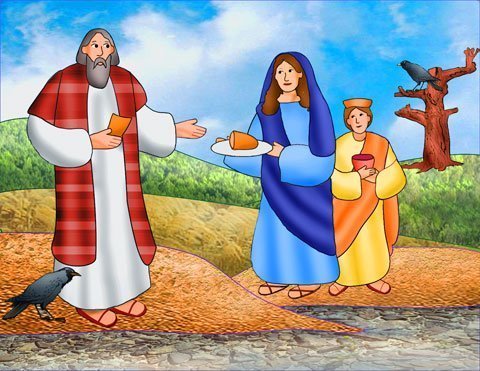 God tells a widow to take care of Elijah

God tells a widow to take care of Elijah

Elijah went before Ahab, the king of Israel, and said to him, “As the Lord, the God of Israel, lives, whom I serve, during these years there shall be no dew or rain except at my word.” Then later, when Elijah was alone, the Lord told him, “Leave here, go east and hide in the Wadi Cherith, east of the Jordan. You shall drink of the wadi, and I have commanded ravens to feed you there.” Elijah obeyed, and the ravens brought him bread and meat in the morning and in the evening, and he drank water from the wadi, or stream.

The stream dried up because of the drought, so the Lord said to Elijah, “Arise, go to Zarephath of Sidon and stay there. I have commanded a widow there to feed you.” Elijah went, and at the entrance of the city he saw a woman carrying sticks. “Please bring me a small cupful of water to drink,” Elijah said to her. As the woman stopped to go get the water, he added, “Please bring along a crust of bread.”

The woman answered, “As the Lord, your God, lives, I have nothing baked; there is only a handful of flour in my jar and a little oil in my jug. Just now I was collecting a few sticks, to go in and prepare something for myself and my son; when we have eaten it, we shall die.”

“Do not be afraid,” Elijah said. “Go and do as you have said. But first make me a little cake and bring it to me. Afterwards you can prepare something for yourself and your son. For the Lord, the God of Israel, says, ‘The jar of flour shall not go empty, nor the jug of oil run dry, until the day when the Lord sends rain upon the earth.’”

The woman made the small cake for Elijah, and after that she prepared a small meal for herself and her son. And the Lord kept his promise to her: The jar of flour did not go empty and the jug of oil did not run dry for a long time.

Some time later, the woman’s son died. She was very sad, and asked Elijah why God had allowed it to happen. Elijah said a prayer and the Lord restored the son’s life. The woman was amazed and said, “Now indeed I know that you are a man of God, and it is truly the word of the Lord that you speak.”

Q&A
1. How did Elijah get bread and meat during the drought?
2. What happened to the woman’s flour and oil?

In Old Testament times the Lord often gave his prophets tasks to perform or messages to deliver. These men had to be faithful and they had to trust God because sometimes they would be putting themselves in danger. One message might tell a king that God’s people were going to overthrow his kingdom, or maybe the people of Israel had turned away from serving God. There are many stories where God rescued his prophets from these dangers or performed miracles to demonstrate his power. The lives of Elijah and Daniel are two examples. Other well-known prophets are Ezekiel, Isaiah and Jeremiah, whose books can be found in the Old Testament.

Ithamar (d. 656) was the first Englishman to be appointed to an English bishopric. He was named the Bishop of Rochester by the Archbishop of Canterbury, who himself is honored as St. Honorius. The two previous Bishops of Rochester, Justus and Paulinus, are both saints as well. Although Ithamar came from a humble beginning in Kent, he earned a reputation as a man of learning and holiness. We do not know very much about this man, but miracles have been attributed to him, and several churches were named after him. We remember him on June 10.