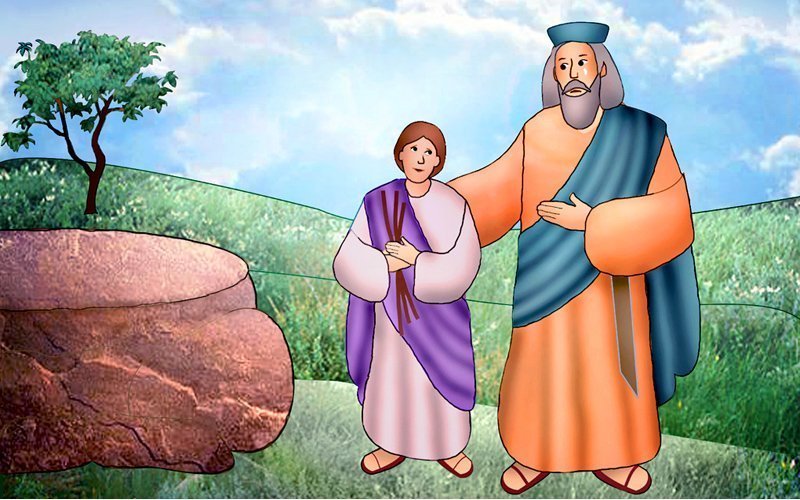 Abraham and his wife, Sarai, had not had any children until they were very old. When Sarai finally presented Abraham with her son by a miracle from God, they called the boy Isaac. Then one day, God called Abraham by name. “Ready!” Abraham answered.

“Take your son Isaac,” God told him, “your only one, whom you love, and go to the land of Moriah. There you shall offer him up as a holocaust on a height that I will point out to you.” Abraham was heartbroken by what God had asked him to do, but he obeyed. Before the sun had barely risen into the sky the next morning, Abraham called two of his servants and he loaded his donkey. And he took Isaac with him.

After traveling for three days, Abraham saw the place where God had told him to go. He stopped and told his servants, “Both of you stay here with the donkey, while the boy and I go on over yonder. We will worship and then come back to you.”

Abraham took the wood the donkey had carried that was for the fire to burn the offering and gave it to Isaac to carry. Abraham carried a knife and a torch to light the fire with. Along the way, Isaac asked, “Father!”

When they arrived at their destination Abraham built and altar and piled the wood for the fire. Then he tied up Isaac and put him on top of the wood, and raised his knife over his head.”

Suddenly a messenger from God appeared and called out, “Abraham, Abraham!”

“Do not lay your hand on the boy,” said the messenger. “Do not do the least thing to him. I know now how devoted you are to God, sine you did not withhold from me your own beloved son.”

Abraham breathed a sigh of relief and lowered his knife. Immediately he saw a ram that had gotten its horns caught in a tangle of bushes. Abraham set his son free and used the ram for the holocaust. Then he named the place Yahweh-yireh, which means, “On the mountain the Lord will see.”

READ MORE ABOUT IT:
Genesis 22

Abraham is one of the most important men in our religious heritage. God promised him that he would become “the father of a host of nations.” Abraham always trusted God, even when he did not understand why God asked him to do certain things. Abraham obeyed God, even when he thought he would have to kill his own son.

The Book of Hebrews tells us, “By faith Abraham, when put to the test, offered up Isaac.” The first verse of the Gospel of Matthew makes another important statement about Abraham, when it says, “Jesus Christ, the son of David, the son of Abraham.” The earthly lineage of Jesus can be traced back all the way to Abraham.

The Apostle Paul tells us that God rewarded Abraham for his faithfulness: “Abraham believed God, and it was credited to him as righteousness.”

Theophanes (d. 817) was born in Constantinople and raised in the court of Emperor Constantine V. He inherited his father’s estate as a young child, and the emperor became his guardian.

In spite of his wealth and position, Theophanes built two monasteries and retired from the world. He lived in the monastery on the island of Kalonymos, which he owned. In 787, he attended the Second Council of Nicea. In 814 Emperor Leo the Armenian wanted Theophanes to use his influence to stop some practices of the church that he disliked, but Theophanes refused. Leo had Theophanes whipped and thrown into a dungeon for two years. After this he was banished to a remote island, where he later died.