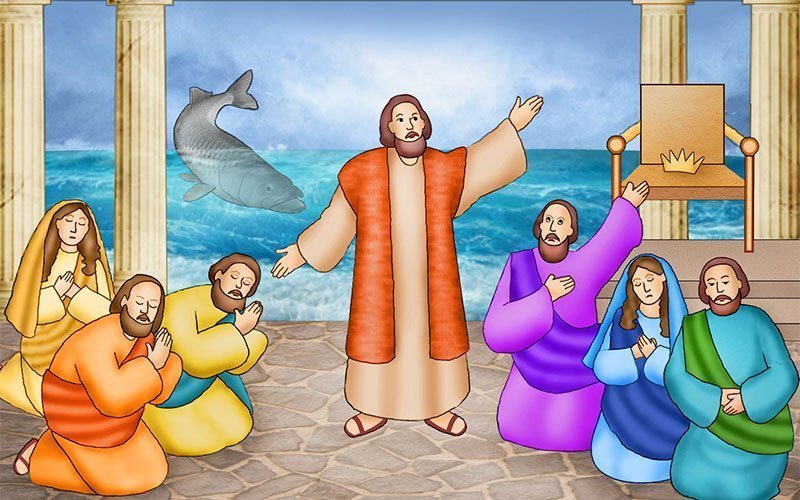 This is the artwork for Kids' Chronicle for Jan. 24, 2021. (CNS illustration by Linda Rivers)

One day, God called a man named Jonah to be his prophet.

“Set out for the great city of Nineveh, and preach against it; for their wickedness has come before me,” God said.

Instead, Jonah tried to flee from God. He decided to board a ship bound for Tarshish.

God caused a great wind to come upon the sea, causing a storm so great that the ship was in danger of breaking up.

“Come, let us cast lots to discover on whose account this evil has come to us,” the terrified sailors decided.

The lot fell on Jonah.

Jonah explained to the sailors that he was a Hebrew who was fleeing from God. He also suggested that he be thrown overboard to calm the sea.

The sailors did what Jonah suggested, and the sea stopped raging.

God sent a great fish to swallow Jonah, and he remained in the fish’s belly for three days and nights.

After Jonah prayed to God, God caused the fish to expel Jonah onto dry land.

Then, for the second time, God called Jonah to be his prophet.

“Set out for the great city of Nineveh, and announce to it the message that I will tell you,” God said.

Jonah traveled to Nineveh. The city was so big that it took him three days to walk through it.

“Forty days more and Nineveh shall be destroyed,” he said.

The people of Nineveh believed God’s message. They declared a fast and put on sackcloth to show repentance.

When the king heard God’s message, he too put on sackcloth, and he also sat in ashes to show his repentance.

“By decree of the king and his nobles, no man or beast, no cattle or sheep, shall taste anything; they shall not eat, nor shall they drink water,” the king declared.

“Man and beast alike must be covered with sackcloth and call loudly to God; they all must turn from their evil way and from the violence of their hands. Who knows? God may again repent and turn from his blazing wrath, so that we will not perish.”

When God saw Nineveh’s repentance, he did not destroy the city.

1. Whom did God call to be his prophet?

2. Where did God want Jonah to go?

Answer: He felt displeased and angry.

There are many places in the Bible that talk about the ancient custom of demonstrating repentance or intense mourning by wearing sackcloth or ashes, or sometimes both.

For example, in the Old Testament, we read in Esther 4:1 that upon learning that the Persian King Ahasuerus was going to allow all the Jews to be killed, Mordecai wore sackcloth and ashes and cried loudly and bitterly.

In Job 2:8, when Job was afflicted with severe boils, he sat among the ashes. In Job 42:6, Job prayed to God for forgiveness: “Therefore I disown what I have said, and repent in dust and ashes.”

And in Daniel 9:3, the prophet said that he “turned to the Lord God, to seek help, in prayer and petition, with fasting, sackcloth and ashes.”

There are references to sackcloth and ashes in the New Testament as well.

For example, in Matthew 11:21, Jesus reproached two towns that did not repent.

“Woe to you, Chorazin! Woe to you, Bethsaida! For if the mighty deeds done in your midst had been done in Tyre and Sidon, they would long ago have repented in sackcloth and ashes,” he said.

St. Felix of Nola was born near Naples, Italy, in the third century.

He was the son of a Syrian-born Roman soldier but decided against army life. Instead, he was ordained a priest by St. Maximus of Nola.

Felix was imprisoned and tortured during Emperor Decius’ persecution of Christians that began in 250. According to legend, an angel freed Felix, and a spider’s web helped him elude capture.

The people wanted him to succeed Maximus, but he instead performed pastoral work from a small farm.

Using the hints provided, put a T next to the sentences from the Book of Jonah that are true and an F next to the ones that are false. If a sentence is false, put the correct answer on the line provided.