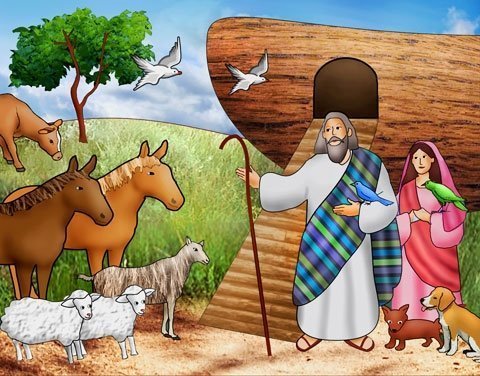 The Lord looked down on his creation with sadness and regret. Wickedness had taken over the hearts and minds of many people, but Noah continued to be a righteous man. God told him, “I see that the end of all mortals has come, for the earth is full of lawlessness because of them. So I am going to destroy them with the earth.”

The Lord gave Noah detailed instructions on how to build a large boat,called an ark, what wood to use for it, how big each of its interior rooms should be and how much food to bring. And the Lord warned him about what was to happen. “… On my part, (I) am about to bring the flood waters on the earth, to destroy all creatures under the sky in which there is the breath of life; everything on earth shall perish.”

But the Lord added that Noah, his family and two of every bird and animal would be saved by being on the ark.

The flood came as God had said, and Noah and his family were kept safe inside the boat. The storm raged and the boat was tossed in the water, but God protected it. When the rain finally stopped and all of the water that had fallen receded, Noah opened the doors of the ark. Then he stepped out onto dry land and all of the people and animals inside left the boat behind him.

God blessed Noah and his family. He said to Noah, “Be fertile and multiply and fill the earth. Fear and dread of you shall come upon all the animals of the earth and all the birds of the air, upon all the creatures that move about on the ground and all the fishes of the sea; into your power they are delivered.” Then the Lord made a promise to Noah. “This is the sign of the covenant that I am making between me and you and every living creature with you for all ages to come: I set my bow in the clouds to serve as a sign of the covenant between me and the earth. … The waters will never again become a flood to destroy every mortal being.”

Q&A
1. Why did God want to destroy the earth?
2. What was the sign of God’s covenant with Noah?

During the times of the Old Testament and New Testament there were wild animals and birds as well animals that had been domesticated for use in farming, transportation and food. The wild animals included bears, lions and wolves that could pose threats to sheep and cattle. Camels were used to carry heavy loads as well as riders. These animals could work with small portions of food and water for up to several days if those items were scarce. Most people used either donkeys or mules because not many people could afford to buy and feed camels. Cattle served as a source of milk and meat as well as leather. Sheep and goats provided milk that could be consumed or made into cheese and clothing made from their hides.

Alexander (d. 328) is most well-known for the stand he took against the heresy committed by another priest named Arius. Alexander believed in living according to the principles established by the first apostles of Jesus. He wanted to live as a peaceful, charitable man who cared for the poor and served God. He tried to find and train new priests who lived the same way. Arius was preaching that Jesus was not really the son of God, and that he also committed sins. Alexander tried to used reason and the teachings of the Bible to persuade Arius to change his views, but was unsuccessful. As a result, the unrepentant Arius was excommunicated and later banished by Emperor Constantine. We honor Alexander on Feb. 26. 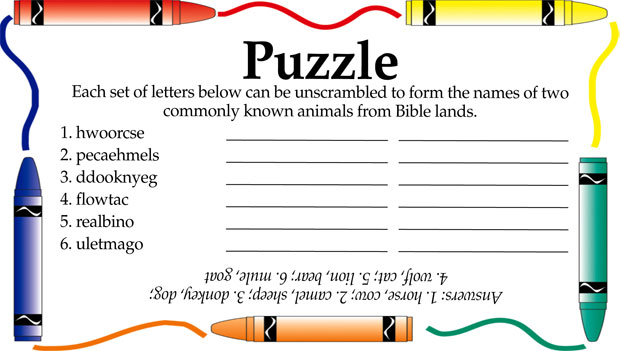