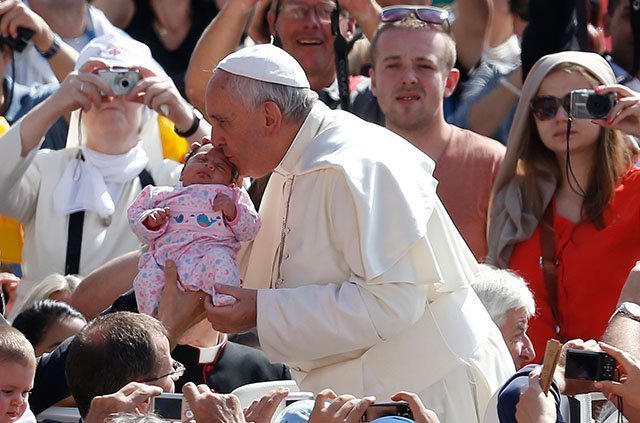 Pope Francis kisses a sleeping baby as he arrives to lead his general audience in St. Peter's Square at the Vatican June 18.

VATICAN CITY (CNS) — Beginning a series of audience talks about the church, its identity and mission, Pope Francis said it would be "a bit like a son talking about his mother, his own family," because the church is the mother of Christ’s disciples and is called to be united as a family.

The story of salvation and of the church "is the story of God’s fidelity and the infidelity of his people," he said June 18 at his weekly general audience in St. Peter’s Square.

But while members of the church have strayed over and over again, he said: "God never tires. God has patience, so much patience, and continues to form and to educate his people just like a father does with his own sons and daughters."

Jesus established the church, but it has a history that began thousands of years earlier when God made himself known to Abraham, the pope explained. Abraham heard God’s call and became the father of a "great nation," as God had promised, and "Jesus was born into this people."

"Abraham and his family listened to God’s call and set out despite the fact that they did not know who this God was and where he wanted to lead them," the pope said. "It’s true. Abraham set out when this God called him, but he didn’t have a theology book to study to find out who this God was. He trusted. He trusted in the love that God made him feel."

The trust demonstrated by Abraham, by the Israelites and by Christians throughout the ages was not unwavering, the pope said. "From the beginning there was resistance" and "betrayals and sins that have marked the story of God’s people all throughout salvation history."

But in ancient times and still today, "God walks with us," Pope Francis said. "When we recognize that we are sinners, God fills us with his mercy and love, and he forgives us. He always forgives us. This is what makes us grow as the people of God, the church."

"It is the daily experience of how much God loves us" that makes the church a blessing to its members and a blessing for the world, he said.

"When God called Abraham this was his plan: form a people blessed by his love and who would bring his blessing to all the people of the earth. This plan has never changed and in Christ it reached its fulfillment and, still today, God continues this work in the church," the pope said.

"I like to think that a synonym for being Christian is being men and women — a people — who always bless. Through their lives, Christians must always bless God and bless others," he said. "It’s a beautiful vocation."