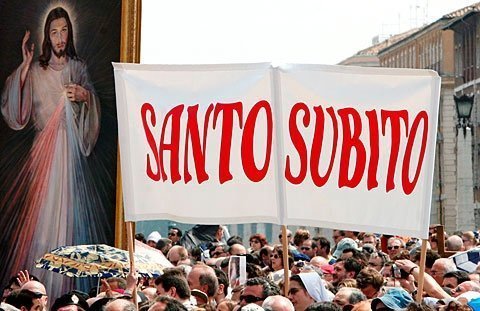 A Divine Mercy image of Jesus and a Santo Subito (Sainthood Now) sign are seen in St. Peter’s Square during Pope Benedict XVI’s Regina Coeli prayer at the Vatican April 23, 2006.

They’re both natives of Poland. They’re among the most revered Catholics of the past century. And, in a few weeks, Pope John Paul II and St. Faustina Kowalska will be one step closer to sharing the distinction of sainthood as well.

May 1 is Divine Mercy Sunday, which was established in 2000 by the late pontiff on the day he canonized St. Faustina. Since then, Divine Mercy Sunday has been observed worldwide every second Sunday of Easter. The upcoming observance will be especially noteworthy, since John Paul II is due to be beatified on that date, putting him just one step short of sainthood.

It’s a fitting occasion for the beatification, since John Paul II was instrumental in raising awareness of the Divine Mercy devotion, which is based on visions St. Faustina experienced in the 1930s. She later said that Jesus instructed her in the visions to establish a Divine Mercy feast for the redemption of sinners.

Deacon George Kozak, who serves the Tompkins County cluster of Holy Cross in Dryden, All Saints in Lansing and St. Anthony in Groton, observed that adherence to Divine Mercy is marked by "the centering on the fact of God being a merciful, loving God."

"The whole devotion is about asking for God’s mercy, and also for you to be merciful to others — to be God’s instrument of mercy," Deacon Kozak said.

"This is vitally important because of the forgiveness you receive," added Rose Marie McLaughlin, a member of Elmira’s Christ the Redeemer Parish.

Divine Mercy prayer gatherings take place all year long, particularly in the form of chaplets — series of prayers said on the rosary. Exposition of the Blessed Sacrament with adoration and Benediction also are frequent Divine Mercy rituals. This focus reaches its peak on Divine Mercy Sunday, with novenas often leading up to the feast day.

Such a nine-day novena will take place in Elmira beginning on Good Friday, April 22, at Monastery of Mary the Queen, 1310 W. Church St. Each gathering will begin with exposition at 7:15 p.m. followed by Divine Mercy prayers, and the closing service will include a 7:45 a.m. Mass on May 1. McLaughlin, who is serving as coordinator, said all are welcome to attend the annual novena. In addition, a Divine Mercy novena is set for April 22-30 at St. Mary of the Lake Church in Watkins Glen.

Other Divine Mercy Sunday celebrations — all on May 1 — will take place at Rochester’s St. Michael Church, for Spanish-speaking parishioners who have been gathering on Friday evenings during Lent for adoration and Stations of the Cross; at Holy Cross in Dryden, which will feature adoration, a Divine Mercy Chaplet and the rosary; and St. Hyacinth in Auburn, which annually hosts a Divine Mercy Sunday event that is attended by neighboring parishes as well.

Helena Kowalska was born in 1905 into a large, impoverished Polish family. At age 20 she became a nun in the Congregation of the Sisters of Our Lady of Mercy, taking the name Sister Maria Faustina of the Blessed Sacrament. She is renowned for her many visions of, and conversations with, Christ and Mary. She documented these encounters in her diary Divine Mercy in My Soul.

The widely circulated image of the Divine Mercy originated from St. Faustina’s description of Jesus’ appearance to her on Feb. 22, 1931. She said he was wearing a white garment; his right hand was raised in a sign of blessing; and his left hand pointed to his heart. Emanating from the heart were two large rays — one red, one white. St. Faustina had a painting made of this vision, and the image — with the words "Jesus I trust in you" appearing at the bottom — has become a cornerstone of Divine Mercy devotion.

St. Faustina continued to have visions throughout the 1930s, but she fell ill in 1936 and died from tuberculosis Oct. 5, 1938, at the age of 33. Church officials in subsequent decades suppressed her writings, due in part to faulty translations. Even so, St. Faustina elicited a strong enough following in the United States that a National Shrine of the Divine Mercy — located in Stockbridge, Mass. — was dedicated in 1960.

In the late 1970s, under the direction of then-Cardinal Karol Wojtyla of Krakow, a detailed investigation into the life and diary of St. Faustina began. After Cardinal Wojtyla became Pope John Paul II, he beatified her in 1993 and canonized her on April 30, 2000.

Increased attention toward St. Faustina has fueled a growth in Divine Mercy prayer gatherings. They are often held at 3 p.m., to signify the hour of Christ’s death. On the other hand, Deacon Kozak said Divine Mercy devotion need not be limited to a formalized church setting nor a particular time of day. He noted, for example, that he and his wife Mary Ann pray a novena at home every year leading up to Divine Mercy Sunday.

Along with many parish-based Divine Mercy devotions, Divine Mercy seminars and conferences have taken place in the Diocese of Rochester in recent years. In addition, Catholic radio stations WHIC 1460-AM in Rochester and WMTQ 88.1-FM in Elmira/Corning, as well as the Eternal Word Television Network (EWTN), offer many Divine Mercy prayer opportunities in their programming.

A God of mercy

Deacon Kozak noted that all three churches in his Tompkins County cluster display images of the Divine Mercy and offer brochures and prayer opportunities related to Divine Mercy. To better educate parishioners on the importance of Divine Mercy, he also wrote an article on the subject for the cluster’s Feb. 5-6 bulletin.

McLaughlin said such awareness-raising is important since she believes many Catholics lack sufficient information about Divine Mercy. Although the Elmira-area novena has been conducted for 18 consecutive years, McLaughlin said she wishes that priests would speak more openly and often on Divine Mercy devotion and its benefits.

"It is vitally important that they get up on the pulpit. They should really try to encourage people," McLaughlin said.

Deacon Kozak acknowledged that Catholics have numerous prayers, rituals and devotions from which to choose, but that he finds the message of Divine Mercy particularly refreshing, based on Jesus’ revelations to St. Faustina that speak of God’s love for us and his willingness to forgive.

"When I was at a Catholic school in the 1950s and 1960s, I never got that impression. We were told, ‘You’re lucky if you get to heaven; we’re all doomed; only by the grace of God at the last second will you get there.’ A lot of people my age and older have been raised that way," Deacon Kozak remarked. "But the Divine Mercy has been the exact opposite of that — the idea that God is a merciful God and he wants us."

Another vital component of Divine Mercy devotion is extending God’s mercy to others, McLaughlin pointed out.

"Jesus doesn’t just want us to make the novena. He wants us to do deeds of mercy toward neighbors, and that’s not easy sometimes," she said.

A number of diocesan parishes offer regular Divine Mercy devotions. Locations and times, based on bulletin and website information, are:

St. John of Rochester, Fairport — each Saturday, 3 p.m. (for children)