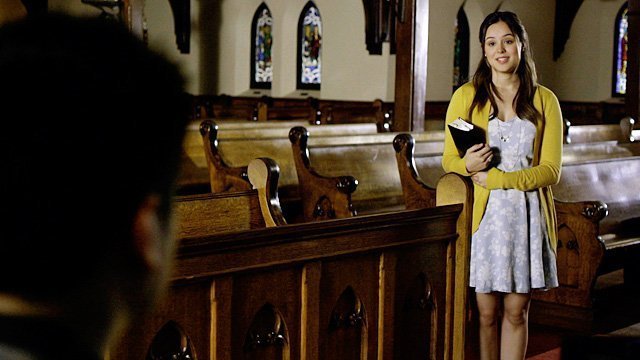 Hayley Orrantia stars in a scene from the movie "God's Not Dead 2." The Catholic News Service classification is A-II -- adults and adolescents. The Motion Picture Association of America rating is PG -- parental guidance suggested. Some material may not be suitable for children.

NEW YORK (CNS) — The very real threats to religious freedom in contemporary society could serve as the theme for a valuable documentary or a thought-provoking drama.

What we get with "God’s Not Dead 2" (Pure Flix), however, is a flawed message movie undermined from the start by a fictional premise that feels thoroughly implausible.

In following up on his 2014 original, director Harold Cronk, along with returning screenwriters Chuck Konzelman and Cary Solomon, shifts the scene from the groves of secularist academe to the halls of an Anywhere, USA, public high school.

There, history teacher, and committed evangelical believer, Grace Wesley (Melissa Joan Hart) is asked a question regarding the Christian antecedents of the Rev. Martin Luther King Jr.’s strategy of nonviolence during the civil rights movement. (She has already covered the influence of Mahatma Gandhi on Rev. King.)

Grace responds by citing Jesus’ famous admonition, recorded in the Gospel of Matthew: "You have heard that it was said, ‘You shall love your neighbor and hate your enemy.’ But I say to you, love your enemies, and pray for those who persecute you." Whereupon all hell breaks loose.

Never mind that Grace has done nothing that could possibly be seen as proselytizing in the classroom; that she has invoked no specifically religious belief such as the divinity of Christ or his role as mankind’s savior; that her answer is strictly factual and thoroughly within the appropriate confines of the discussion. Faster than you can say Madalyn Murray O’Hair, the administration is down on her like a pack of wolves — closely followed by the school board and the American Civil Liberties Union.

If only Grace would apologize for her lapse in judgment, all would be forgiven. But she remains steadfast. So it’s off to court, where she’ll be represented by untried but good-hearted lawyer Tom Endler (Jesse Metcalfe).

Cheering Grace on from the sidelines — and providing her with emotional and spiritual support — is her kindly grandfather, Walter (Pat Boone). Leading the charge against her is the American Civil Liberty Union’s serpentine lead attorney, Peter Kane (Ray Wise).

Kane oozes sweet reasonableness, yet he rests his case on the thoroughly irrational notion that Jesus never existed. The debate that follows showcases the interesting work of J. Warner Wallace, a veteran Los Angeles County cold-case detective who applied police investigative techniques to examining the evidence about Jesus’ life, death and resurrection. But the fact that Kane is a straw man pursuing an unrealistic strategy compromises the impact of Wallace’s rebuttal.

Audiences may also be slightly unsettled by the fact that Kane’s backup counsel, who hovers around with little to say, looks like a thin Seth Rogen playing a young Henry Kissinger. His persona implicitly evokes a stereotype far better left alone.

Taken as a whole, this reaffirmation of belief, though appropriate for most moviegoers, suffers from an off-key tone, a pervasive sense of victimhood and sometimes painful sentimentality.

The film contains mature themes and an instance of harsh parental violence. The Catholic News Service classification is A-II — adults and adolescents. The Motion Picture Association of America rating is PG — parental guidance suggested. Some material may not be suitable for children.