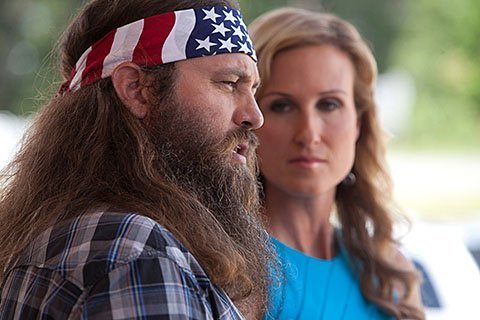 Willie and Korie Robertson star in the movie "God's Not Dead." The Catholic News Service classification is A-II -- adults and adolescents. The Motion Picture Association of America rating is PG -- parental guidance suggested. Some material may not be suitable for children.

NEW YORK (CNS) — A classic bit of impertinence from 19th-century German philosopher Friedrich Nietzsche notwithstanding, it seems that "God’s Not Dead" (Freestyle).

While that may be a welcome piece of news to those who were entertaining any doubts, the message movie that endeavors to proclaim such reassurance from the big screen turns out to be earnest but ineffective.

Pity poor college freshman Josh Wheaton (Shane Harper). No sooner does Josh stroll onto the picturesque campus of his new university than he encounters Professor Radisson (Kevin Sorbo), the militantly atheistic faculty member who presides over the introductory philosophy course for which committed believer Josh has ill-advisedly registered.

Nearly the first order of business in Radisson’s class is for each student to write out, sign and pass to the end of the row the succinct formula: "God is dead." Not surprisingly, Josh demurs; astoundingly, no one else in the packed lecture hall seems to have the least objection to fulfilling so flagrantly inappropriate a requirement.

Josh’s stand-out obstinacy drives his infuriated instructor to challenge him to a multipart debate on the subject of the Almighty’s existence, with Josh’s classmates as the jury and the lad’s grade for the course hanging in the balance.

Josh takes up the gauntlet, despite the active discouragement of his believing but ambitious girlfriend Kara (Cassidy Gifford), who thinks he should go with the flow to avoid ruining their perfect future together. He is pre-law, after all.

So the stage is set for a rather dreary exchange of views — angry on Radisson’s side, meek but steadfast on Josh’s — during which such names as Charles Darwin and Stephen Hawking get bandied about for one side’s benefit or the other’s. Josh — no flat-Earther he — insists that both the Big Bang theory and the hurried pace of early evolution weigh on the side of a Creator and correspond to the symbolic details contained in the Book of Genesis.

Subplots abound around this core story. One involves strictly brought-up Muslim lass Ayisha (Hadeel Sittu). Though she dislikes the headscarf her traditionalist father makes her wear, and ditches it as soon as he drops her off on campus each morning, her inclusion in the movie seems, initially, to hold out the hope that the filmmakers are taking a broad view, and that believers of all stripes are eventually to be seen rallying to the cause. Take that, Professor Radisson!

Alas, not a bit of it. Ayisha harbors a secret, one that only reinforces the rigid presuppositions on offer here.

Other characters being made to conform to the script’s cramped and caricatured worldview include crassly materialistic business exec Mark (Dean Cain), his hippy-dippy main squeeze Amy (Trisha LaFache) and Josh’s fellow student and newfound pal, People’s Republic of China-bred Martin (Paul Kwo) — to whom any mention of matters divine apparently comes as a shock.

On the side of the angels, meanwhile, lurk the local minister, Rev. Dave (David A.R. White), his missionary best friend, Rev. Jude (Benjamin Ochieng), as well as Radisson’s beleaguered (and possibly live-in) love interest Mina (Cory Oliver), a semi-closeted Christian for whose timidly proffered ideas her companion has only scorn.

There might be the kernel of an intriguing documentary buried within director Harold Cronk’s stacked-deck drama, given the extent of real-life academic hostility toward religion. But even faith-filled moviegoers will sense the claustrophobia of the echo chamber within which this largely unrealistic picture unfolds.