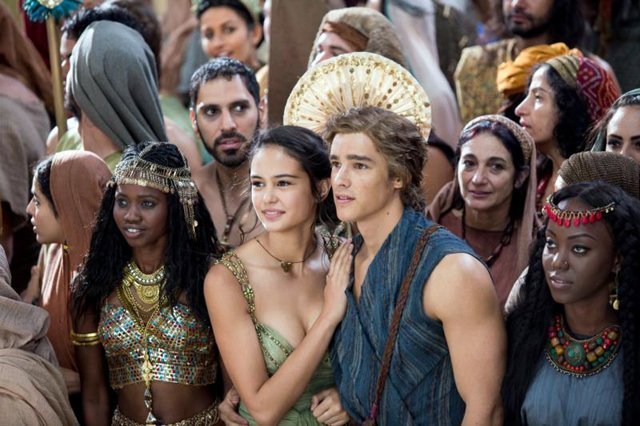 Courtney Eaton and Brenton Thwaites star in a scene from the movie "Gods of Egypt." The Catholic News Service classification is A-III -- adults. The Motion Picture Association of America rating is PG-13 -- parents strongly cautioned. Some material may be inappropriate for children under 13.

NEW YORK (CNS) — "The battle for eternity begins," proclaims the tagline of "Gods of Egypt" (Lionsgate), a swords-and-sandals epic about warring deities along the banks of the Nile.

Though the film is populated by false gods like Ra (Geoffrey Rush) and his son, Osiris (Bryan Brown), there’s little danger of viewers falling into the sin of idolatry. That would require taking this piece of mindless distraction as something other than two hours’ worth of overblown nonsense.

Though director Alex Proyas ("I, Robot") helms the proceedings with deadly seriousness, the end result of his efforts is an unintentionally funny 3-D fantasy adventure that strays, on occasion, into outright campiness.

For example, the gods are 9 feet tall, veritable Gullivers in a Lilliputian land of poor Egyptian mortals like teenage thief Bek (Brenton Thwaites), our unlikely hero.

With his girlfriend Zaya (Courtney Eaton) in tow, Bek attends the lavish coronation of yet another deity, Horus (Nikolaj Coster-Waldau), the feckless son of good king Osiris. Osiris wishes to retire in peace, but his wicked brother, Set (Gerard Butler), has other plans. He crashes the ceremony, slays Osiris (shedding his golden blood), and proclaims himself king.

Set also vanquishes his nephew, gouging out his eyes, the source of his divine powers.

With Horus banished to the desert, darkness descends over all Egypt (rendered in meticulous CGI), and the people are enslaved.

Fortunately for all concerned, Zaya works in the household of Urshu (Rufus Sewell), architect to the king. There she manages to uncover a map showing where Set has hidden Horus’ purloined peepers. By stealing them back, she and Bek hope to restore Horus’ supernatural gifts and return him to power.

Action unfolds at a furious pace, akin to a frenetic video game, shifting from the royal palace to the underworld, and even outer space. Up in those parts, Ra, the so-called "source of all creation," keeps a watchful eye on Earth while attacking marauding space worms, eager to gobble up gods and mortals alike.

Needless to say, it’s all very silly, and before you can sing "Tut-Tut-Tutankhamun, goodbye!", all memory of it will — mercifully — have departed.

The film contains mythological hooey, cartoonish action violence, an adulterous relationship and at least one crude term. The Catholic News Service classification is A-III — adults. The Motion Picture Association of America rating is PG-13 — parents strongly cautioned. Some material may be inappropriate for children under 13.