God's weak spot is his love for those who are lost, pope says - Catholic Courier 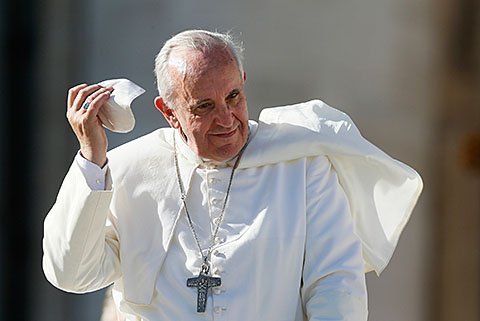 Pope Francis takes off his zucchetto as he leaves his general audience in St. Peter's Square at the Vatican Nov. 6.

VATICAN CITY (CNS) — God has a certain weak spot of love for those who are lost or have strayed furthest from him; they are the ones he goes out to find, Pope Francis said.

It’s because God is a sore loser, he added, saying God doesn’t like losing his children.

"He searches for all those who have strayed from him. Like a shepherd, he goes looking for the lost sheep," the pope said at his early morning Mass in the Domus Sanctae Marthae Nov. 7.

In his homily, the pope looked at the parables of the lost coin and the lost sheep in the Gospel of St. Luke, where Jesus is responding to the Pharisees and scribes who were scandalized and complained that Jesus welcomed and dined with sinners.

Their grumbling "is the music of hypocrisy," the pope said, according to Vatican Radio.

The people who complained about Jesus "believed that to be religious, to be good," meant having everything go well in life, to be well-mannered "and many times to pretend to be well-behaved, right?" he said.

"This is the hypocrisy of grumbling" and complaining about others, the pope said.

God, however, is joyful, he said.

"He is a God who doesn’t like to lose anything, he is not a good loser and for this reason, so as to not lose someone, he goes beyond himself, he goes and searches."

God’s task is "to go looking" and "to invite everyone, the good and bad, to the celebration."

God "has a certain weakness of love for those who have strayed the furthest, who are lost," Pope Francis said. "He goes and looks for them" everywhere, like the woman who lost a coin and searches carefully until she finds it.

And like the woman and the shepherd, God rejoices after finding what was lost, the pope said.

Once the lost are found, he said, God doesn’t keep them separate from the flock or treat them differently, but places them with the others "because he returns all of their dignity" with their repentance.

"There is no difference" between the one who strayed and those who stayed, he said, because "he straightens out everyone he finds."

"God’s joy isn’t the death of the sinner, but his life," he said. "The joy of God the father is love; he loves us" even as sinners.

God says, "’I love you all the same, and I will go and look for you and bring you back home.’ This is our father. Let’s think about that," the pope said.