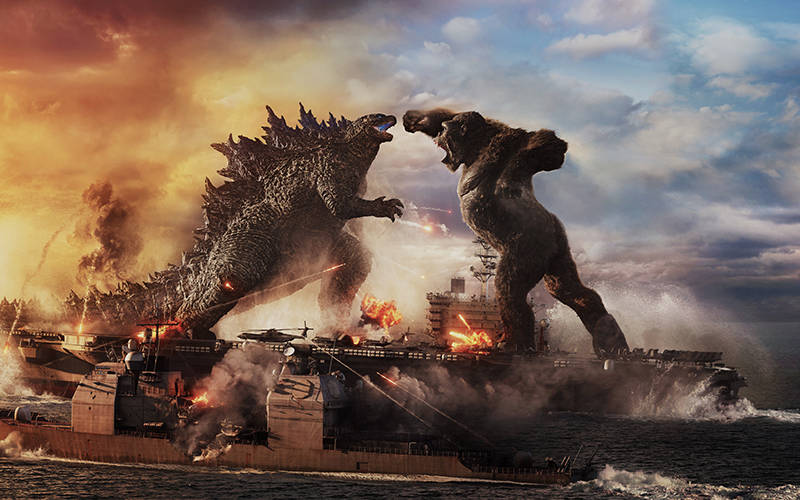 This is a scene from the movie “Godzilla vs. Kong.” The Catholic News Service classification is A-III — adults. The Motion Picture Association rating is PG-13 — parents strongly cautioned. Some material may be inappropriate for children under 13. (CNS photo by Warner Bros. Pictures and Legendary Pictures)

NEW YORK (CNS) — The goal of a film bearing the title “Godzilla vs. Kong” (Warner Bros.) would seem to be simple enough. Set the iconic beasts raging at each other until at least one Asian city has been devastated, then roll the credits.

Alas, not content with such a straightforward aim, screenwriters Eric Pearson and Max Borenstein entangle their showdown in the varied strands of interaction among an ensemble cast. The unintended upshot is that the outsized brutes prove a good deal more interesting than the puny humans.

Director Adam Wingard’s creature feature — a follow-up to both 2019’s “Godzilla: King of the Monsters” and “Kong: Skull Island” from 2017 — turns out, accordingly, to be visually spectacular but dramatically feeble. As the diffuse plot becomes ever more involved, grown viewers who can handle bloodless mayhem and occasionally vulgar dialogue may be longing to get on with the smackdown.

Those on whose fortunes we’re meant to hang include Jia (Kaylee Hottle), an orphaned deaf girl who has won Kong’s affection — albeit with far less alarming results than those Fay Wray long ago inspired — and Jia’s adoptive mother, Ilene (Rebecca Hall), a linguist who tries to communicate with the big simian.

We’re also called on to track eccentric podcaster Bernie (Brian Tyree Henry) and his efforts to uncover shenanigans at a high-tech conglomerate (where would we be, after all, without an evil corporation?). Bernie, we note, acquires a teen protege in the earnest person of Madison (Millie Bobby Brown).

Another figure thrown into the crowded mix is scientist and author Nathan Lind (Alexander Skarsgard). He embarks on a quest to reach the center of the earth.

Eventually, the real stars do regain center stage. So, by showing some patience, those in search of top-flight special effects and crashing skyscrapers will be well satisfied. As for movie fans looking for memorable characters … well, the hunt continues.

The film contains frequent stylized violence, at least one use of profanity, several milder oaths, about a half-dozen crude terms and a couple of crass expressions. The Catholic News Service classification is A-III — adults. The Motion Picture Association rating is PG-13 — parents strongly cautioned. Some material may be inappropriate for children under 13.