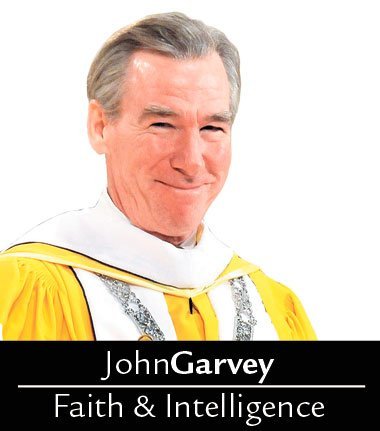 The Harvard Extension Cultural Studies Club and the Satanic Temple of New York caused a stir in May by planning a "black mass" in Harvard’s Memorial Hall. At the last moment, the local protest grew so large that the club withdrew its sponsorship. A Satanic Temple spokesman said the event was held off campus at a Chinese restaurant in Harvard Square.

Press reports struggled to fit the dispute into familiar categories. Catholics and their allies described the event as discriminatory. C.J. Doyle, the head of the Catholic Action League of Massachusetts, said it showed that anti-Catholicism "remains a respectable prejudice." Terry Donilon, spokesman for the Boston Archdiocese, called the event "offensive to Catholics and people of good will." The former president of Harvard’s Catholic Students Association called the Satanists’ efforts "hateful."

Drew Faust, Harvard’s president, invoked principles of free speech, calling the event "abhorrent," but said she would let it go ahead because "vigorous and open discussion and debate are essential to the pursuit of knowledge."

The Harvard Extension club used the same free speech trope: "We are disappointed by the self-righteousness of those who conspire to silence others simply because they claim offense."

I share the sentiment that this sacrilege is offensive. But more importantly, as the official archdiocesan statement noted, it is evil. Thomas Aquinas said that blasphemy is in one sense a greater sin than murder because it is committed directly against God, whereas murder is a sin against one’s neighbor.

This point might not carry much weight with people who deny any transcendent reality, but the Satanic Temple curiously acknowledges on its website that "Satan is subordinate to God." The law once punished blasphemy, not just because it was "extremely impious," as an old New York case put it, but because "to cast contumelious reproaches upon [Christianity] tended to weaken the foundation of moral obligation, and the efficacy of oaths." In other words, blasphemy and sacrilege undermine the social contract itself.

Our modern understanding of the First Amendment forbids the government to regulate speech or religious practice. But the culture exerts its own control over blasphemous and sacrilegious practices, for reasons very much like those that underpinned our old laws.

Consider racism, which nearly all Americans acknowledge today as a great sin. Donald Sterling, who owns the Los Angeles Clippers basketball team, was recently caught on tape asking his girlfriend to stop bringing African Americans to basketball games, and to stop posing with them in photographs. It was an outrage — an instant national news story. Sterling was banned for life from attending NBA games, fined $2.5 million by the NBA, and may be forced to sell his interest in the team. He has become a national pariah.

This goes to show that even our contemporary popular culture, which often seems to pride itself on holding nothing sacred, understands that some things really are sacred. That doesn’t include unpopular ideas like the Catholic commitment to creating a culture of life. But the vigorous community reaction to the "black mass" can provide us with some consolation.

The protest against this mockery and desecration included a eucharistic procession through Cambridge attended by thousands, followed by a standing-room-only crowd for adoration at St. Paul’s Church.

The result was a small victory against blasphemy at Harvard, and an opportunity to talk about the real presence in the Blessed Sacrament, for a large local and national media audience.

God lets us do evil, even to him, but he also brings good out of it.