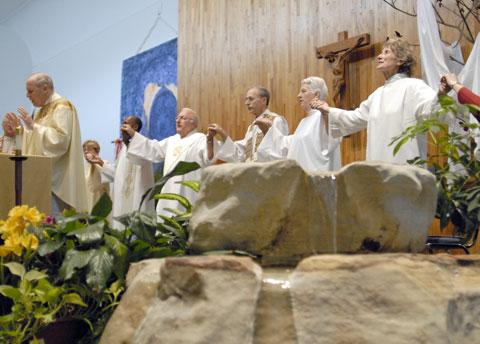 Parishioners at Good Shepherd Parish in Henrietta began the celebration of the church’s 100th anniversary a little early.

In fact, parishioners got the party started April 24 with a Mass and grazing party, even though the parish’s official centennial will be July 16, 2011, 100 years after the parish’s first Mass, according to a parish history.

The kickoff for the centennial celebration was timed to occur before the parish clusters with two neighboring faith communities: Guardian Angels, Henrietta, and St. Joseph, Rush. As part of the clustering process, the three parishes have agreed to a new Mass schedule that starts May 22 and reduces the total Masses from nine to six.

"Most of us won’t be around for the second hundred years, but we can all pray for new courage to meet the challenges of today and tomorrow, and we can be absolutely sure that Christ will be there with us," Bishop Matthew H. Clark said in his homily April 24.

The Mass was the first of several centennial celebrations, including a coffee hour that took place April 25. Future celebrations are in the planning stages. Good Shepherd parishioners said the April 24 party was intended to highlight all of the parish’s "good shepherds" — staff and volunteers who have given time, talent and treasure to the parish. Longtime parishioners and volunteers were recognized during the Mass with applause and standing ovations.

"This is such a vibrant parish with a lot of volunteers," said Sue Eliasz, who was the chairwoman of Good Shepherd’s parish council and who now is a member of the triparish council for Rush-Henrietta Catholic Community. "We wanted some way to say thank you to them before all the clustering started in July."

Eliasz said many parish organizations stepped up to help when they heard about the celebration. Such generosity is one of the hallmarks of the parish, said Janet McNally, who has been the social-ministry coordinator for 10 years.

"We aren’t people who have lots and lots of resources, but people are very generous with what they have," said McNally, who noted parishioners have contributed everything from Thanksgiving baskets to baby items to assistance after natural disasters.

During the celebration, there also were generous helpings of nostalgia, in the form of bellywash (a watered-down punch) and Sugar Daddies (caramel candy on a stick), which longtime pastor Father George Vogt, who served from 1945 to 1972, often concocted for school events.

Kevin Judge of Brighton, who attended school at Good Shepherd from 1969 to 1973, said he remembers the punch and caramel combo being served at roller-skating parties and nearly every other parish and school celebration. As he thought back on his years at Good Shepherd School, he said he also has grown to appreciate his teachers more and more.

"I didn’t know it at the time, but obviously they weren’t paid a tremendous amount, so they must have been very dedicated to what they were doing," Judge said.

His mother, Bobbie Judge, a current parishioner, said bingo parties and some of the priests from the parish are part of her happiest memories of Good Shepherd. Although Bobbie Judge moved away in 1980, she returned several years later.

"When I moved back to Henrietta, I was home (at church) again," she said.

Teresa Swift of Henrietta, a parishioner for more than 70 years, said she remembers the original church when it wasn’t even a quarter full, because Henrietta was still so rural.

"It has grown tremendously from when we first moved here," Swift said.

A 700-seat basement chapel was added to the parish in 1964 to complement the 240-seat original church, and in 1978 the chapel was expanded to 950 seats. The growth of the parish in the 1960s mirrored the explosive growth of the Town of Henrietta, said Henrietta Town Historian Helen Vollmer Elam, a parishioner whose grandparents were part of the first group of parishioners.

"When I used to come out here as a child to visit my grandparents, Henrietta was completely rural," Elam said. "I just remember happy times. I would come out there and run through the cherry orchards. When I moved out here in 1959 it was still very rural, but it was just beginning to be developed."