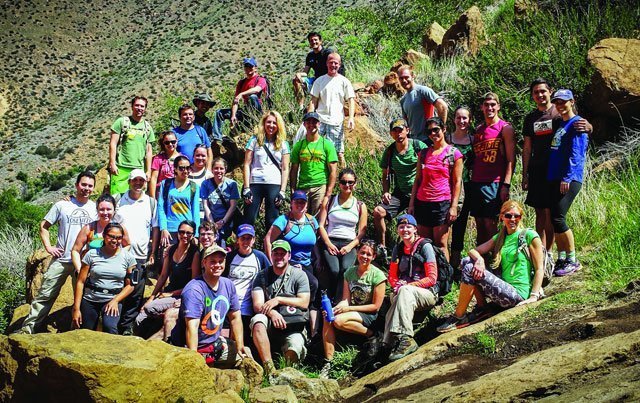 Members of Catholic Young Adult Sports of San Diego pose for a group photo while hiking to Three Sisters Falls in Cleveland National Forest in 2014.
By Denis Grasska
Catholic News Service
SAN DIEGO (CNS) — A ministry focusing on the excitement and friendship that can come from athletic competition is bringing young people together in faith.
Catholic Young Adult Sports has emerged in the Diocese of San Diego over the past two years and the program’s founder and president, Paul Spotts, said CYAS has taken a page from the playbook of the early church, which often would "baptize" the idols of its day and use them to lead people to Christ.
In a culture where sports is "the biggest idol," Spotts said the ministry has served as both an effective means of building community among young adult Catholics and as a non-intimidating approach to the new evangelization.
Nathan Poe, who serves as director of programs for Southern California, brought CYAS to San Diego. Locally, the program organizes leagues and pickup games throughout the year. There’s Ultimate Frisbee in the spring, volleyball in the summer and kickball in the fall. And there is hiking and other recreational and social events that are not explicitly spiritual.
"Sometimes, we get into this sort of ‘all Catholic, all the time’ mode, and we need time to let loose," Poe said.
CYAS gives participants the chance to "just have fun, have some competition, some friendly rivalry, go out and get a beer afterwards, and just sort of live life the way most people would see as normal."
Back in 2012, Joseph Enright began participating in CYAS Ultimate Frisbee games "to get some exercise and meet some new friends."
"Growing up, I was raised Catholic," he said. "However, I did not have a strong sense of the Catholic community outside of church on Sundays."
What he experienced through CYAS was something entirely new.
"Here in San Diego, there was a diverse, vibrant community of young adults opening in prayer, throwing the Frisbee around and competing even with local priests on the field," said Enright, who has gone on to be involved with several CYAS sports leagues.
Jacqueline Tremblay attended her first CYAS event, also Ultimate Frisbee, more than a year ago.
"I sought out CYAS because I wanted to be active with a few people who believed the same thing as me and, hopefully, get a few Catholic friends who I could hike or surf with," Tremblay said. But what she received were "real relationships that go far beyond the playing of a sport together."
"This is a community of joy, laughter and people who seek to love others, to serve, to foster a life that is pleasing to God and we have fun doing it," she added. "I am challenged by these people and continually learn more about my faith in a nonjudgmental way … and enjoy a good laugh almost every time we hang out."
In addition to cultivating a sense of community among Catholic young adults, CYAS also provides a welcoming space for lapsed Catholics, non-Catholics and even non-believers.
Spotts noted that Catholics often "want to skip straight to catechizing people." He contrasted this with the approach taken by CYAS, which focuses on "evangelizing through friendship."
"What we’re talking about is introducing people to the Body of Christ (the church) before they are able to receive the Body of Christ (in the Eucharist)," he explained.
Poe acknowledged that many young adults might feel intimidated by an invitation to Mass, but often are more than willing to come out for a game.
At CYAS events, Poe said, the Catholic faith is shared through "normal conversations" among friends, not through proselytizing. He added that there is no pressure for non-Catholic and agnostic participants to convert, and some current Protestant members remain "very happy in their Protestantism."
Enright told The Southern Cross, newspaper of the San Diego Diocese, that among the things that surprised him about CYAS was that Poe "never directly asked me to go to Mass. That wasn’t Nathan’s style of evangelization. Instead, he provided a safe, fun and positive environment for Catholic young adults to come together and … the seeds of faith were replanted in my heart just by being present in that community."
Both Spotts and Poe believe that the church has a long way to go in terms of its outreach to young adults.
Spotts said the church is "hemorrhaging" young adults and risks losing that age group unless it demonstrates that it has more to offer them. "We have Jesus in Communion, but we forget that we also need to have communion with each other," he said.
The ministry is able to use sports as "the bridge" to deeper catechesis and increased involvement in the church, Spotts said.
He noted that CYAS has helped young adults in San Diego to become more actively involved at their parishes. Some participants have volunteered to serve as confirmation sponsors or to teach religious education classes.
"Participants are showing that they’re active, not just in sports" and in activities that support their personal need for community, Spotts said, but that "they also give back to the community of the church."
– – –
Grasska is assistant editor of The Southern Cross, newspaper of the San Diego Diocese.
Copyright © 2023 Catholic News Service, Inc. All rights reserved. Linking is encouraged, but republishing or redistributing, including by framing or similar means, without the publisher's prior written permission is prohibited.