Gorbachev, St. John Paul had great appreciation for each other - Catholic Courier 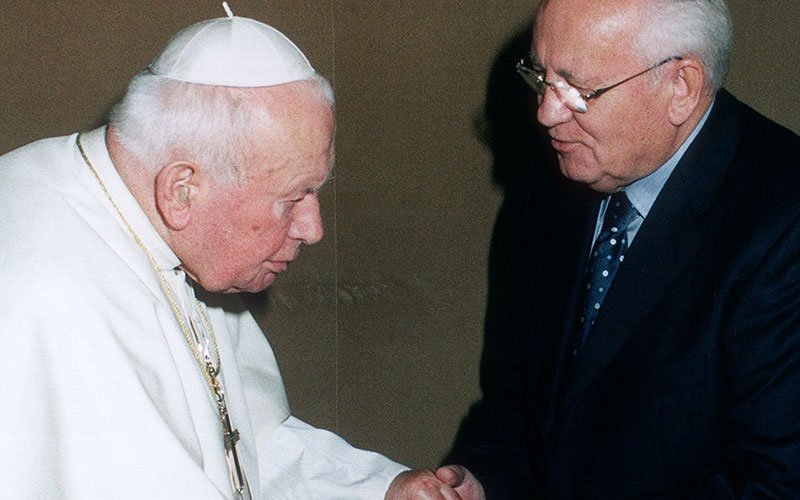 VATICAN CITY (CNS) — Former Soviet President Mikhail Gorbachev, who died Aug. 30 in Moscow after a long illness, met several times with St. John Paul II, and the two often exchanged words of appreciation for each other.

The two leaders met in 1989 and again in 1990, when Gorbachev was still president of the Soviet Union and was introducing political and economic reforms in his country, as well as on other occasions. Both men were key in the collapse of the Soviet Union, and Gorbachev won the 1990 Nobel Peace Prize for his efforts.

Important figure in fall of the Berlin Wall

Joaquin Navarro-Valls, who served as papal spokesman for St. John Paul II and often reported on their meetings, later called Gorbachev the most important figure in the fall of the Berlin Wall.

Commemorating the 20th anniversary of the collapse of the wall in an article published Nov. 5, 2009, in the Rome newspaper La Repubblica, Navarro-Valls cited Pope John Paul’s support for the Polish labor union Solidarity as a key development in the pro-democracy movement in the region. But he said Gorbachev saw that the political movement in Eastern Europe was popular and unstoppable, and the Soviet leader avoided military repression and even verbal opposition.

Pope John Paul and Gorbachev understood one another

Navarro-Valls said that when Gorbachev first met with Pope John Paul in December 1989, less than a month after the wall’s collapse, the two leaders “understood each other immediately.”

“Both clearly understood the direction that history had begun to take. Both felt that freedom was not a political fact but a human dimension that was essential and not able to be suppressed,” Navarro-Valls said.

A transcript of that 1989 meeting showed St. John Paul and Gorbachev expressed broad agreement on the need for greater religious freedom in the Soviet Union, for a renewal of ethical and moral values, and for improved Catholic-Orthodox relations.

The two leaders also agreed that at a time of upheaval in Eastern Europe, the region should not be expected to simply import Western values wholesale.

“It would be wrong for someone to claim that changes in Europe and the world should follow the Western model. This goes against my deep convictions,” the late pope said.

“Europe, as a participant in world history, should breathe with two lungs,” the pope added, using one of his favorite metaphors for harmony between East and West on the continent.

“That is a very appropriate image,” Gorbachev replied.

Pope John Paul pressed Gorbachev on the possibility of the Vatican and the Soviet Union exchanging diplomatic representatives, which he felt would aid in resolving religious freedom problems and other issues. Gorbachev responded positively, saying that “we approve such an approach” while cautioning against acting too quickly.

In the year that followed the papal audience, Gorbachev followed through on several issues raised by the pope: The Soviet Union enacted a law to protect religious freedom, allowed the Ukrainian Catholic Church to come out from underground and welcomed a Vatican ambassador to Moscow.

After St. John Paul died in 2005, Gorbachev called him “the No. 1 humanist on the planet.”

Gorbachev, 91, was general secretary of the Communist Party of the Soviet Union from 1985 to 1991 and Soviet president 1990-91. At its height, the Soviet bloc included 15 countries in Eastern and Central Europe, and in most countries, Catholicism was repressed.

But in 1988, Gorbachev welcomed a top-level church delegation to Moscow for ceremonies commemorating the millennium of Christianity in the region. Early 1989 saw the restoration of the Lithuanian Catholic hierarchy, the return of the Vilnius cathedral and the freeing of a Lithuanian archbishop from house arrest.

In that period, the then-Vatican secretary of state, Cardinal Agostino Casaroli, summed up what Gorbachev meant to the church: “We are always ready to dialogue. What was lacking was a partner. Now a partner exists.”

Under Gorbachev’s leadership, in 1990 the Soviet Union passed a freedom of religion law that rolled back decades of communist restrictions on churches, including those against religious instruction and freedom of association. It legalized the 5-million-member Ukrainian Catholic Church and restored some of its churches and other properties.

Several bishops were named in Soviet republics with no interference from the government. The government extended an invitation for a papal visit — which has never occurred — and policy statements by Soviet officials indicated growing recognition that religion represents a cultural strength.