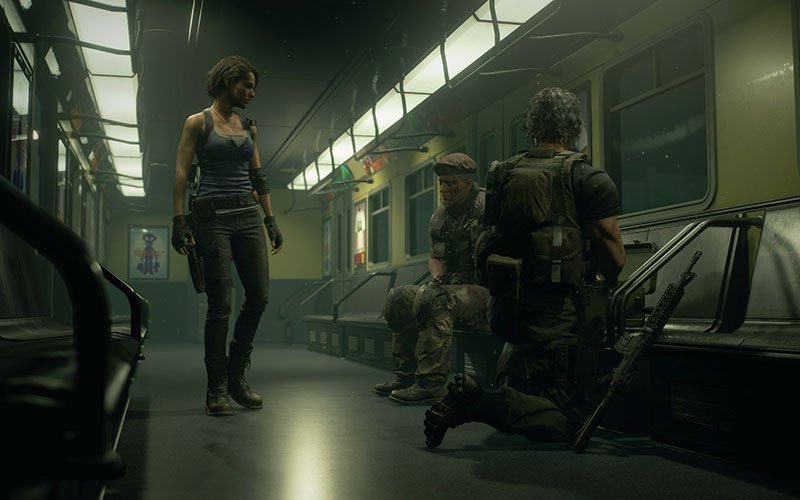 This is a scene from the video game "Resident Evil 3." (CNS photo by Capcom)

NEW YORK (CNS) — “Resident Evil 3” (Capcom), a popular, gory zombie shooter from the late 1990s, has been given new life. While there are faint traces of a positive underlying morality to be found in the game, its wayward violence and vocabulary will put off both parents guiding their kids’ gaming choices and a large cohort of grown-ups making decisions for themselves.

At alternate times, players control two characters. The first is Jill Valentine (voice of Nicole Tompkins), a heroic officer in the police department of one of the franchise’s primary settings, Raccoon City, and a veteran of that force’s elite Special Tactics and Rescue Service (STARS) team.

Since STARS was an anti-bioterrorism unit, Jill is ideally placed to head up the response when a virus begins to turn local residents into the groaning undead. The six-hour story pits her against the insidious Umbrella Corporation’s unrelenting creature, Nemesis, and the forces who unleashed the terrible pandemic.

The second persona gamers assume is that of mercenary Carlos Oliveira (voice of Jeff Schine). He’s been hired to do Umbrella’s bidding.

Refreshingly, there’s no sexual content or inappropriate attire. But gameplay focuses overwhelmingly on slaying opponents with guns, knives and explosives.

Killing flesh-eating monsters is, obviously, no violation of the Fifth Commandment but an exercise in legitimate self-defense. Yet the experience of being immersed in the mayhem of this dystopian conflict could well have a coarsening effect on gamers, especially impressionable ones.

Jill does come across as an ethically respectable figure. She is, after all, sacrificing her own safety and well-being to save Raccoon City and the rest of the world. Amid the maelstrom of the grisly struggle that surrounds her, though, her good example seems to cast only a faint ray of light.

Even on a strictly technical and artistic level, moreover, this remake compares unfavorably with last year’s “Resident Evil 2.” Compared with that redo, this one feels stunted and lackluster and offers little re-playability. Only horror fans with thick skins and moderate expectations should opt for it.