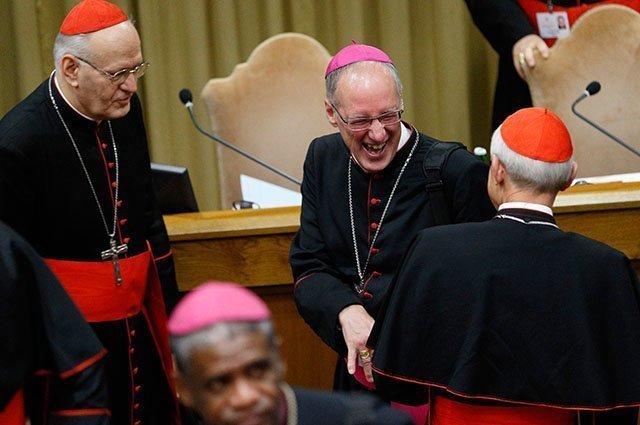 Archbishop Paul-Andre Durocher, president of the Canadian Conference of Catholic Bishops, laughs as he talks with Cardinal Donald W. Wuerl of Washington before the morning session of the extraordinary Synod of Bishops on the family at the Vatican Oct. 9. At left is Cardinal Peter Erdo of Esztergom-Budapest, Hungary, relator for the synod.

VATICAN CITY (CNS) — The church needs to find better ways to show how the Gospel message is a way of life meant to bring great joy to couples and families, and is not a burdensome set of rules aimed at exclusion, one member of the extraordinary Synod of Bishops on the family said.

"Church teaching has to be rediscovered not as a set of rules, but as a true good news, a good news that frees people," said Archbishop Paul-Andre Durocher of Gatineau, Quebec, president of the Canadian Conference of Catholic Bishops.

Synod briefers have told reporters that a recurring theme at the synod is the relationship between upholding and being faithful to God’s truth and being a church of mercy that embraces those who suffer.

Archbishop Durocher said that "tension between teaching and pastoral care disappears" when people recognize that living the teaching brings healing.

"The teaching itself is a form of pastoral care," he said.

The archbishop told reporters during a briefing Oct. 9 that breaking truth and mercy into two opposing camps "is unjust."

Bishops not in favor of admitting divorced and civilly married Catholics to the Eucharist are exercising mercy "because mercy is bringing people to the truth."

And, likewise, to say that those who are looking for ways to make Communion more accessible "are not concerned with justice or with truth — that also would be unjust to use that language," he said.

What the church is trying to do "is find what is the will of God, and that will is a will of justice and of mercy," he said.

The previous day, Archbishop Durocher told CNS that the challenge is how bishops, religious and faithfully married couples can get that point across to everyone.

"We have a lot of work to do to find out ways of expressing (God’s plan): Why is faithfulness a gift? Why is fruitfulness in marriage a gift? Why is fidelity to one’s partner a gift? Why is reconciliation a gift?" and then how can these teachings "become a way of life for people?" he said.

People are "hungry and thirsty for meaning," he said, so how can the church better show the world and Catholics the way?

Not everyone is able to live in the way God wants and many people struggle, experience failure and "are hurt by terrible situations with families, within marriages," he said.

Archbishop Durocher said the synod proceedings have been showing that "all the bishops agree that we have to find ways" to help those in need.

The question of access to Communion for divorced and civilly remarried Catholics also has to be seen through the lens of accompanying people more effectively in order to bring them closer to what God offers, he said.

He said when people realize their irregular situation means they cannot receive Communion, they see that "as an exclusion" from the church and church life.

Experiencing this situation as exclusion "is certainly not what Jesus wants for people who are struggling," he said.

Cardinal Odilo Pedro Scherer of Sao Paulo told Vatican Radio that "the people of God is made up of saints and sinners. We don’t want to keep just the saints and kick out the sinners," he said.

Those struggling need support and encouragement and those who "will never be able to regularize their situation" can still take part in other aspects of life in a Christian community, the cardinal said in an interview Oct. 8.

Not having access to Communion is a sign of "a situation of not accepting, of not being, at least in part, in a communion of faith with the church," he said.

"Therefore the question of Communion is not simply about saying, ‘Yes, you can.’ ‘No, you can’t,’" he said. "It truly pertains to this foundational question of accepting or not accepting the faith of the church."

Archbishop Durocher said the challenge is to find ways to accompany these people in a way that they can still feel welcome, and, better yet, help couples build a marriage that will last.

"We have to face the fact that in most of our parishes we give a summary introduction to marriage in the marriage preparation course, a go-through-the-moves of the sacrament and try to celebrate it well. And then the next time we see the couple is when they show up to have their child baptized," the archbishop said.

"This begs the question: What are we actually doing to accompany couples as they try to live out the Gospel message in their own lives? This is where the challenge lies," he said.

One idea that came from another synod member was to start formation programs for the vocation of marriage — and not just religious life — when Catholics are young.

Honduran Cardinal Oscar Rodriguez Maradiaga of Tegucigalpa told the synod assembly Oct. 6 that preparation should begin after confirmation with "a real and true catechetical process of formation that offers young people the options of marriage or consecration to God in religious life," according to a summarized report by the Vatican newspaper, L’Osservatore Romano.