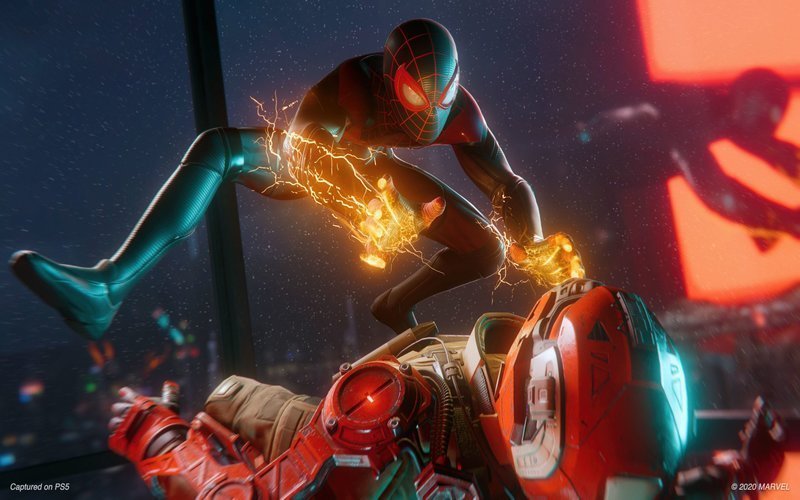 This is a scene from the video game "Marvel's Spider-Man: Miles Morales." The Catholic News Service classification is A-III -- adults. The Entertainment Software Rating Board rating is T -- teens. (CNS photo via Sony)

NEW YORK (CNS) — Gotham has a new guardian in “Marvel’s Spider-Man: Miles Morales” (Sony Interactive). While this exciting game involves any number of dustups, they’re depicted in a sufficiently restrained way to make it suitable for grown players and possibly acceptable for older teens as well.

A year has passed since the action of this title’s 2018 predecessor, “Marvel’s Spider-Man.” As players of that game will recall, young Miles Morales (voice of Nadji Jeter) was bitten by a genetically enhanced arachnid, gaining powers similar to those of Peter Parker (voice of Yuri Lowenthal). In the meantime, Peter has been training Miles.

With Peter and his journalist girlfriend, Mary-Jane Watson, now relocating to Europe, though, it’s time for his protege to take center stage as New York’s web-slinging, rooftop-swinging defender.

Miles’ protection will be needed since a gang war has broken out between the Roxxon Energy Corporation and the Underground, a high-tech crime army led by a genius engineer called the Tinkerer (voice of Jasmin Savoy Brown). Additionally, there’s the usual steady flow of petty crime to keep the new Spidey busy.

Even as he copes with these challenges, 17-year-old Miles also helps out with his mother’s campaign for City Council. Thus he carefully balances his life as a superhero and as a civilian.

When combat breaks out, Miles uses nonlethal punches and kicks while his enemies use guns, swords and grenades. Miles also has superpowers unique to him, such as his ability to make a form of bioelectricity he calls “venom.” Occasionally, there are blood splatter effects during fight sequences, but they’re not lurid.

There are missions where Miles encounters adversaries discussing drug deals and smuggling, though these are portrayed in a suitably negative light. As always — whether it’s Peter or Miles spinning the silk — Spider-Man, by contrast, remains a positive role model.

In both his guises, Miles understands the importance of equity, protecting the innocent, honoring his family and offering opportunities for reconciliation and redemption. The game itself, moreover, features a diverse cast of characters, with people of color and those with disabilities taking on prominent roles.