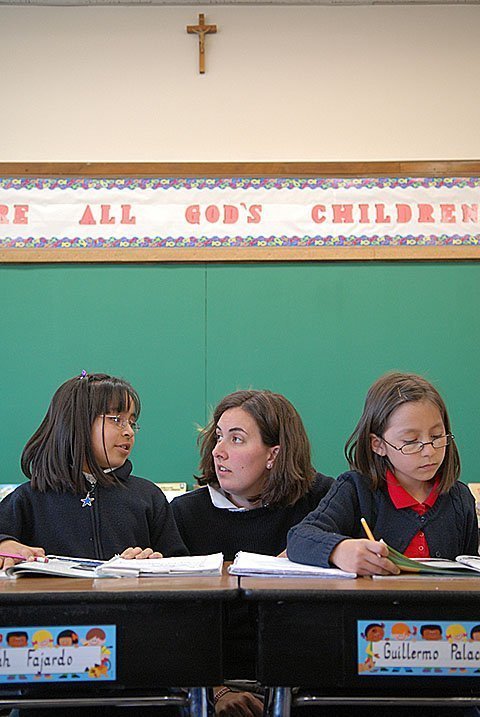 Cassie Clemente assists students in 2007 at Holy Wisdom Academy in Milwaukee as a member of the Jesuit Volunteer Corps.

WASHINGTON (CNS) — Like many students graduating from college this spring, Ivy Seraphin, always assumed she would go straight to graduate school.

Seraphin, who was to graduate May 18 from Manhattan College in Riverdale, New York, switched gears sometime during her senior year when she decided to do volunteer work after graduating.

"I didn’t really want to spend a year off just to make money. I like the idea of giving myself time to grow and figure out things and help people that need help," said the Baltimore native, who plans to spend the next year, or even two years, tutoring students with Lasallian Volunteers in Racine, Wisconsin.

Seraphin, whose major is psychology and minor is women and gender studies, said she did not have a hard time telling her family and friends her plans after graduation because her path is not all that unusual. Her brother volunteered with City Year — an AmeriCorps program that works with high school students — and many of the students at Manhattan College, a Lasallian school, have volunteered with Lasallian Volunteers.

Students she knows who did this work last year all seemed to have the same reaction about the experience: "it was a challenge, but worth it."

Seraphin’s challenge — when she spoke to Catholic News Service 10 days before graduating –was the four exams still to come and research papers she still needed to write.

"It’s been a great four years," she said. "It’s weird coming to terms with the fact that I am not coming back."

What’s also a little hard to take in is the fact that her service work will take her far from the East Coast, which she is used to, but she said her friends have promised to make the trip out to Wisconsin to visit.

She also looks forward to tutoring, saying she is "honored to be able to help students do better."

As far as living on a stipend, Seraphin said that shouldn’t be a problem since she’s "used to living on a low budget as a college student."

At the May 9 graduation ceremony at Loyola University Chicago, graduating senior Chidinma Uchendu, who sang the national anthem, was going to interviews the next day for an elementary school teaching position with Teach for America, a program where college graduates commit to teach for two years in urban and rural public schools.

Uchendu, who was born in Nigeria, said she has "seen what happens when people are denied an education," and has "always had a passion for providing people with equal opportunities."

"When I came to this country, I realized that some things aren’t as different as you would think," she said. "No matter how wealthy a country is, there are still people who suffer and who lack certain basic amenities. And I believe education is a basic amenity that everyone should have access to."

Kerry Rogers, graduating May 18 from Loyola University Maryland, said she doesn’t know where she’ll be living or working after graduation but she isn’t bothered by that.

Rogers, who is majoring in English with a minor in writing, was accepted into the Jesuit Volunteer Corps and is waiting to find out where she will be placed.

She told a school publication that she decided to volunteer after realizing that the one thing that "consistently made me feel most myself and most alive during my four years at Loyola was participating in various service opportunities."

"These experiences have shaped my time at Loyola and my view of myself and the world around me, and I am incredibly excited to be able to focus on service full time for at least the next year," she said.

The service work these graduates do will not only help those they are volunteering to help but can impact their future involvement in civic and church work, according to a study conducted last fall by the Center for Applied Research in the Apostolate at Georgetown University.

Jesuit Father Tom Gaunt, CARA’s executive director, told CNS the study highlights "the profound effect one year of service has on young adults," which he said "truly transformed" them. He also said the responses reveal how that volunteer program played — and continues to play — an important role in forming a "cadre of leadership" for the church.