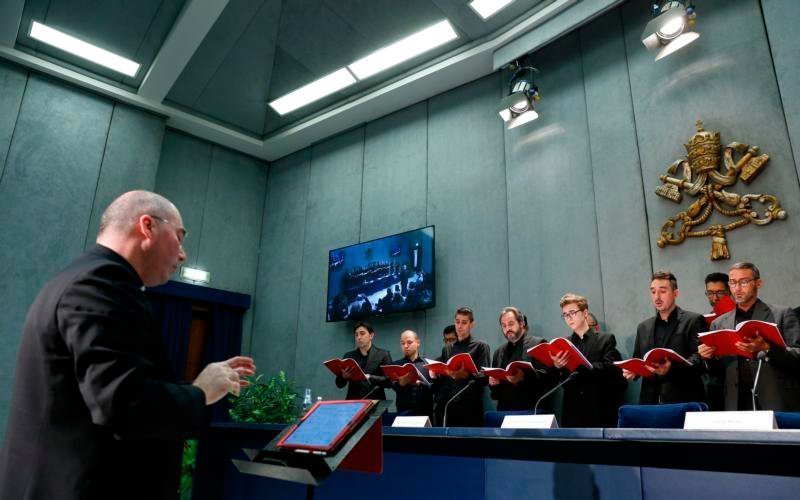 Members of the Sistine Chapel Choir perform during a press conference for their release of their new CD, "Veni Domine- Advent and Christmas at the Sistine Chapel," at the Vatican Oct. 24. (CNS photo/Paul Haring)

It marks the first time one of the oldest choirs in the world has issued a recording with a female singer, Msgr. Massimo Palombella, director of the Sistine Chapel Choir, told Catholic News Service.

The new 16-track CD, “Veni Domine: Advent and Christmas at the Sistine Chapel,” was to be released in Italy Oct. 27 and worldwide in November with the proceeds earmarked for the poor through the pope’s charities.

Produced by Deutsche Grammophon and Universal Music Italia, the CD marks the fourth joint venture between the music companies and the papal choir; the other CDs include “Habemus Papam” and “Cantate Domino.”

Like “Cantate Domino,” “Veni Domine” was recorded in the Sistine Chapel not only for its rich acoustic effects, but also because the musical compositions chosen had originally been composed to be sung in the chapel for papal celebrations, the monsignor told reporters at a news conference Oct. 24.

The one change adjustment made to the chapel was that carpets were put down to improve the sound quality, said Mirko Gratton, head of the classical and jazz music division at Universal Music Italia.

All of the musical selections, Msgr. Palombella said, were taken from the choir’s vast ancient archives at the Vatican Library. Three of the Renaissance-era compositions have never been performed in modern times, he added.

The pontifical choir, which traces its history back to the 1470s, is dedicated to making its music known beyond the walls of Vatican City and to helping people experience Christ through sacred music, he said.

Editors: The CD can be ordered or downloaded beginning Oct. 27 at: http://www.deutschegrammophon.com/en/cat/4797524 or from Amazon, Apple music or iTunes.