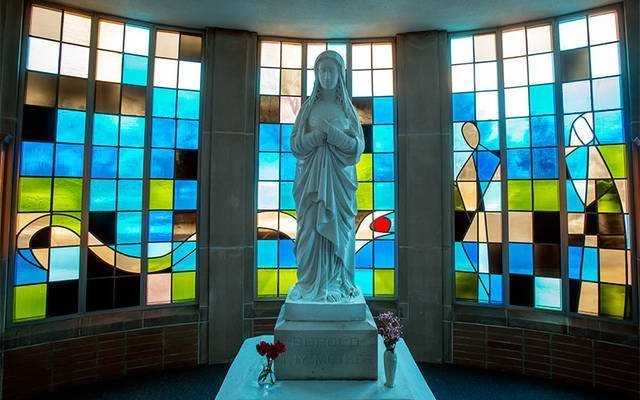 The Oratory of Our Lady has been created in a former baptistry in the rear of Our Mother of Sorrows Church in Greece. (Courier photo by Jeff Witherow)

GREECE — In 2015, not long after Father William Coffas arrived as pastor of Our Mother of Sorrows Parish, he put out a last-minute request for volunteers to help clean an area of the church marred by a water leak.

“We got 20 people on a beautiful summer afternoon,” he recalled. “I was so impressed with the parishioners’ willingness to be of assistance, to literally get their hands dirty. I thought, ‘This is an amazing parish.’”

Eager participation of this sort has, from Father Coffas’ viewpoint, been a catalyst for several fresh initiatives launched at Our Mother of Sorrows in recent months:

‚Ä¢ A monthly Teen Mass debuted in September 2018. The upbeat events, held on Sunday evenings at 6 p.m., feature parish youths filling such liturgical roles as musicians, lectors, extraordinary ministers of holy Communion, altar servers, sacristans, ushers and greeters. Future teen liturgies will take place March 24, May 19 and June 9. (There is no Teen Mass in April due to Holy Week and Easter.)

Although people of all ages are invited to attend, each Teen Mass is chiefly designed as “a liturgy that is welcoming of teens,” Father Coffas said. He said the Masses have proven popular thus far; for instance, he noted the enthusiastic manner in which liturgical duties are embraced.

“You can see how young people enjoy being a part of that,” he said. “I’m very pleased.”

‚Ä¢ A young-adult ministry was begun in December 2o18. The initiative is being led by Deacon Thomas Jewell, parish deacon, along with several young-adult parishioners interested in sharing social and spiritual opportunities. Young adults age 18 and up (single or married) are welcomed, both from within and outside of the parish. For details on future meetings and events, contact Deacon Jewell at tom.jewell@dor.org.

‚Ä¢ The Oratory of Our Lady has been created in a former baptistry in the rear of the church. The room’s centerpiece is a large, newly refurbished statue of Mary, dating back to the 1800s, that had previously occupied an alcove in the former Our Mother of Sorrows church exterior. Also featured in the oratory are 25 authentic relics of such saints as St. Patrick and St. Elizabeth Ann Seton. The relics, which were donated by a parishioner, are available for public veneration. The chapel and its contents were blessed this past Sept. 15 by Bishop Salvatore R. Matano, who also celebrated Mass that day on the parish’s feast day of Our Lady of Sorrows.

Father Coffas said the oratory is open for prayer any time the church is open and is accessed frequently: “It’s a very beautiful place of devotion.”

‚Ä¢ The parish’s St. Francis of Assisi Food Cupboard, located in the church-hall area, was launched in early October 2018 for nearby residents dealing with hunger. It is open on the first Monday of each month from 4 to 6 p.m., the third Wednesday from 1 to 3 p.m. and the fourth Saturday from 10 a.m. to noon. Father Coffas said the cupboard is supported by parishioner donations as well as a strong volunteer base; he also noted that Our Mother of Sorrows supports an additional community hunger initiative, the Back Pack program for elementary-school students.

Along with these ongoing efforts, the parish has hosted several special public events as of late: a memorial service in February 2018 for the 17 victims of a Florida school shooting; a hope and healing service this past Sept. 14 in response to the opioid crisis; a parish mission Dec. 1-3 with Chris Bray, a young-adult Catholic evangelist and musician; and, most recently, a lecture Feb. 22 by Dorina Hayes, a Catholic mother of seven from Rochester, who spoke about her healing from and transformation after abortion. The parish also helped coordinate the only bus in western Monroe County that transported local Catholics to the March for Life in Washington, D.C., in mid-January. In addition, the parish added two automated external defibrillator (AED) units for cardiac emergencies in the fall of 2018, training ushers, greeters and other parishioners on how to use them.

Overall, the wealth of activity involving Our Mother of Sorrows has left its pastor very pleased.

“I see all these opportunities to preach the Gospel, not necessarily just with words but also gestures,” Father Coffas said. “It’s really come together very, very well.”