Greece couple looks back on 75 years of marriage - Catholic Courier 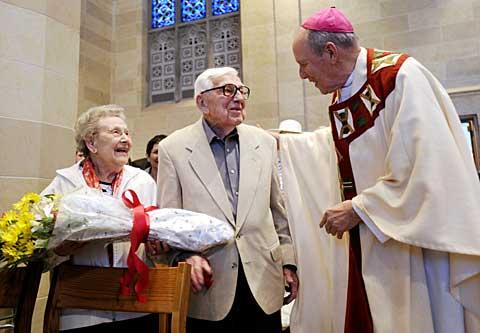 Michael and Virginia Yanko, who will celebrate their 75th wedding anniversary on Sept. 12, are congratulated by Bishop Matthew H. Clark during the Wedding Jubilee Mass at Sacred Heart Cathedral May 16.

GREECE — Michael and Virginia Yanko say they don’t have a magical formula for sustaining a long and happy marriage, but they have good advice: Treat your spouse truly as a partner.

"We pretty much run things together," Michael Yanko noted during an interview at the couple’s home May 17.

The Yankos — who will celebrate their 75th anniversary on Sept. 12 — were the longest-married couple honored by Bishop Matthew H. Clark May 16 during the annual diocesan Wedding Jubilee Mass at Sacred Heart Cathedral. The couple married at Rochester’s Our Lady of Perpetual Help Church and now attends St. Jude the Apostle Church in Gates.

The couple’s daughter, Mary Ellen Maas of Irondequoit, said her parents have been great role models. She and her husband have been married 44 years and have friends who are amazed about that.

"Everything is so disposable now," Maas said. "Growing up with them and listening to them make decisions by talking about it on what they wanted to do. It’s a good lesson. They never made it, ‘This is what I want and you can’t have it.’ It was always, ‘I’d like to do this. How do you think we can do it?’"

The couple’s life together began in the neighborhood of North Clinton Avenue near Norton Street where Virginia Yanko’s father owned a small grocery store. Both had groups of friends that would do things together such as go sledding, they said. She also ran a hot dog stand outside Silver Stadium and sold the snack for 10 cents each.

"We met there, got together, loved one another and got married," Michael Yanko said in describing their courtship.

After working during his school years at the Wegmans bakery, Yanko later got a job as a firefighter for the Rochester Fire Department that lasted for 35 years. He drove the truck to fire calls and helped in many rescues.

They bought a plot of land and built a house on Farmington Road in the city and raised two children whom they had adopted. Virginia Yanko worked three jobs — as a knitting teacher, a proofreader at the Rochester Democrat and Chronicle and a cafeteria worker.

When they retired, they sold their house in 1977 and began their next adventure, buying an Airstream trailer and traveling to Florida and other parts of the country with a travel trailer club. They later purchased a motor home and drove back and forth to Arizona, where they subsequently lived for 25 years.

"It kept us young at heart," Virginia Yanko said of their travels. "It kept us busy."

They returned to Rochester five years ago to be close to their daughter as well as several of their six grandchildren and six great-grandchildren. Their son, Richard, is an attorney in Las Vegas.

Michael Yanko said he and his wife bought a fixer-upper on Ridgemont Road in Greece and have worked to improve it themselves by completing such work as pulling up carpets and painting. They both say their health remains fairly good considering they are in their mid-90s, although Virginia Yanko does need a walker to get around. The only household task they hire out is lawn maintenance.

"And that’s only because I don’t have a mower," Michael Yanko joked.

That kind of dedication to hard work is what they see lacking in younger couples, who may give up on marriage because they don’t want the hassle, Virginia Yanko said.

"It’s hard work," she said of marriage. "You have your ups and downs."

Virginia Yanko said that one of the most difficult aspects of their long marriage is the loneliness that comes from losing so many of their friends who have died over the years.

Added her husband: "We are the last of our breed."