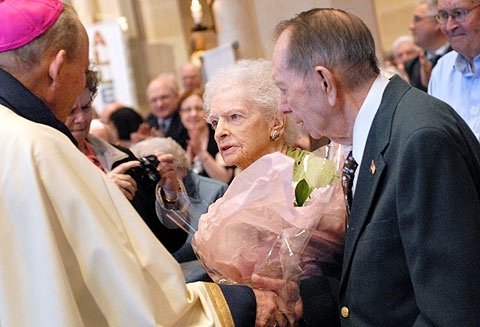 During the May 6 Wedding Jubilee Mass Bishop Matthew H. Clark recognizes Virginia and Raymond Blind for their 76 years of marriage.

GREECE — When Raymond Blind and Virginia Downs eloped in July of 1936, they faced their share of naysayers who did not hold high hopes for the couple’s future.

"Everyone said it wouldn’t last, it would not work out, and guess what? It’s 76 years later. It’s been a long, good trip through life," Virginia Blind recently told the Catholic Courier as she sat across from Raymond in the home the couple has shared for 71 years.

Bishop Matthew H. Clark honored the Blinds on May 6 during the Diocese of Rochester’s annual Wedding Jubilee Mass at Sacred Heart Cathedral. At 76 years, the Blinds have been married longer than any of the other couples at the Mass, so Bishop Clark presented them with a bouquet of flowers and congratulated them on their accomplishment.

The Blinds themselves are not surprised by their marriage’s longevity, and say they knew when they married that they were in it for the long haul.

"We had a little stick to it-iveness," Virginia said, noting that many couples these days seem to give up on their marriages too quickly. "We’ve had our share of problems. Everyone does, and if they say they don’t, they’re lying. You’ve got to know how to overcome them."

Virginia took Raymond’s heart the first time the two met, which was in front of a casket at a funeral home. He thought she was pretty and wasted no time in calling her on the phone the very next day. Virginia was equally attracted to Raymond, and the two soon began dating. They went to movies and out to eat, and they especially loved to go out dancing.

"He was a great dancer. I liked to dance, and we danced well together," reminisced Virginia, 95.

Raymond and Virginia weren’t dating each other exclusively, however, and Raymond’s feelings about that became apparent one day when he invited Virginia to a dance she was already planning to attend with another date. Raymond was not ready to admit defeat, so he invited another girl to the dance.

"As (they) were dancing past myself and some other guy, what does he do but switch partners and dance me right out to the car. He stole me!" Virginia exclaimed.

"I can’t believe I did that," Raymond said with a bemused smile.

Virginia and Raymond had been dating for a year or so when they decided to get married in short order. Virginia belonged to St. Augustine Parish in Rochester and Raymond belonged to Rochester’s Holy Rosary Parish, but their pastors would not preside over hastily arranged weddings, so instead they got married at Corpus Christi Parish, also in Rochester.

"When we got married we had nothing. He didn’t even have a job. My father got him a job at Kodak, and it lasted 43 years," said Virginia, who worked as a secretary for the Greece Central School District for 20 years.

After they were married the Blinds saved their money for five years and then built the Greece home they still live in today. When they moved to Greece they joined St. Charles Borromeo Parish, where they still attend Mass every Sunday morning.

The Blinds’ four children take turns taking the couple to Sunday Mass each week, and in return the Blinds treat their chauffeurs to Sunday dinner at a restaurant. The Blinds’ children also come over twice during the week to take them out to shop and run other errands.

Years ago when their children were growing up, the Blinds often took the family on fishing trips in Canada. The couple continued traveling after their children were grown, but they began taking trips to more exotic locations like Hawaii, Spain, Japan, Hong Kong and Morocco, and they took at least 11 cruises. These trips helped give them something to look forward to, even when times were tough, Virginia said. The trips helped the couple keep their romance alive, which Virginia said is a crucial ingredient in a healthy and long-lasting marriage.

In their younger years, Raymond kept that romantic spark going by giving Virginia homemade cards on Mother’s Day or her birthday. She saved all of these cards, which usually featured hand-drawn cartoon characters or pictures clipped from newspapers or magazines. Raymond continued to create these cards until his diminishing eyesight rendered him legally blind and unable to do so.

The Blinds still find little ways to show their love for each other each day. When Raymond was hospitalized for several days a few months ago, Virginia called him each morning to say good morning and visited him every afternoon. They also talked on the phone before bed each night until he returned home.

"Just because you’re getting older, don’t forget about your romance," Virginia said.