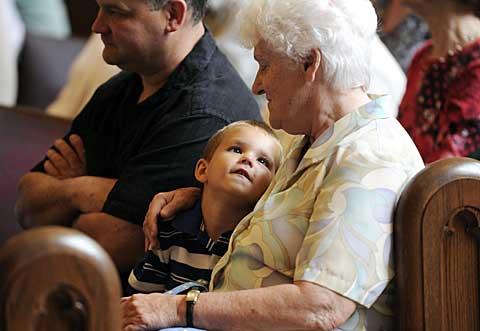 GREECE — Even before there was an Our Lady of Mercy Parish, Clara Solan gave life to the fledgling church.

"Father (Michael) O’Brien lived with me and our family and started the parish from our home," Solan recalled.

In 1957, Father O’Brien took over two rooms of the Solan house in Greece, and the parish began to celebrate Masses in the former Lake Theater on Lake Avenue in Charlotte. In addition to hosting the priest, the Solan family answered the parish phone, entertained diocesan visitors and eventually sold their home to the parish, which used it as a convent for the Sisters of Mercy who taught at the parish’s school.

Over the years, Solan’s family continued their involvement in the life of the parish. Clara Solan served as the parish sacristan and school secretary for many years. Her late husband, Robert, printed the church bulletin on an antique printing press and was ordained with the first class of permanent deacons in the diocese. One of her daughters, Cathy, became a Sister of Mercy, taking her final vows at the parish in 2007 as the parish celebrated its 50th anniversary.

Father John Gagnier, Our Lady of Mercy’s administrator, noted that the parish worked hard recently to reduce its debt, cutting it from $67,000 two years ago to $39,000 currently. He said he expects to have the full amount of debt paid off once the parish property is sold.

The parish’s territory will be reabsorbed by those parishes that helped form it: Our Mother of Sorrows, Holy Cross and St. Charles Borromeo. Consecrated hosts from the final Mass will be reserved at each of the parishes in the planning group as a sign of unity. Parishioners also were allowed to take vials of holy water with them as mementos.

"Wherever you go, take the spirit of Mercy with you," Father Gagnier said. "Take the wonderful blessings of 53 years, or however long you have been here, with you."

Father William Amann served as homilist for the Mass. Over 17 years, he was assistant pastor, associate pastor, administrator, copastor, pastor and pastor emeritus of the parish. He told parishioners to be guided by Jesus and Mary’s mercy in their future journey.

Deacon Dick Lombard, pastoral associate for the parish, proclaimed the Gospel reading with emphasis on Jesus’ command to his followers to look only to the future: "No one who sets a hand to the plow and looks to what was left behind is fit for the kingdom of God."

At the end of the Mass, Father Gagnier and parishioners said prayers at stations throughout the church. Afterwards hundreds stayed to gather for a reception financed by a gift from Frances O’Brien, sister of the late founding priest.

Before and after the reception, many parishioners said they hadn’t yet decided where they would go next. Jerry Rause of Greece, who has been attending Our Lady of Mercy for about 20 years, said he will most likely go to Our Mother of Sorrows, where his wife is buried, but he hates to see his neighborhood parish close.

"I met a lot of nice people here," Rause said.

"God sent us here for a reason, and he’s going to send us somewhere else for a reason," said Marion McCrone of Greece, who noted that she and her husband felt they had joined a family when they joined Our Lady of Mercy Parish.

Parishioner Nora Plumeri, who wrote a parish history upon its 50th anniversary in 2007 and whose family was among the parish’s founders, said the enthusiasm of parishioners highlighted the early days of the parish. Many were close friends because they worked together at Eastman Kodak Co. in addition to attending the parish. However, the enthusiasm of the founders was eventually met with the reality that the parish was a business that needed money to survive, Plumeri said.

"Unfortunately, I was one of the people on the committee who made the decision to close it," she said. "It just seemed like there was something we should have been able to do (to save it), but it wasn’t revealed to me."

Parishioner Pat Amato said that the neighborhood and community around the parish will feel its absence — a point driven home during the parish’s final garage sale in late May and early June.

"When we had our garage sale, there was not one day when one of the customers didn’t say (that the church) was such a presence in our community," Amato said. The reality of the closing hit her when she saw the parish’s coffee pots — a symbol to her of the parish’s long-standing fellowship activities — sold during the garage sale.

Speaking after the Mass, Deacon Lombard, who has been assigned to the parish for eight years, said he is sad to leave, but also is looking forward to the future. Father Gagnier announced at the Mass that Deacon Lombard and parish staff members Marie Marton, who was Our Lady of Mercy’s faith-formation director, and Bill Costanzo, who was the pairsh’s music director, will move to positions at Holy Name of Jesus Parish.

"I have been here just under eight years, and it has been an absolutely wonderful experience," Deacon Lombard said after Mass. "The people here are very, very special. I’m certainly sad that it’s ending this way, but we are moving on to bigger and better things, and God has great things in store for us."