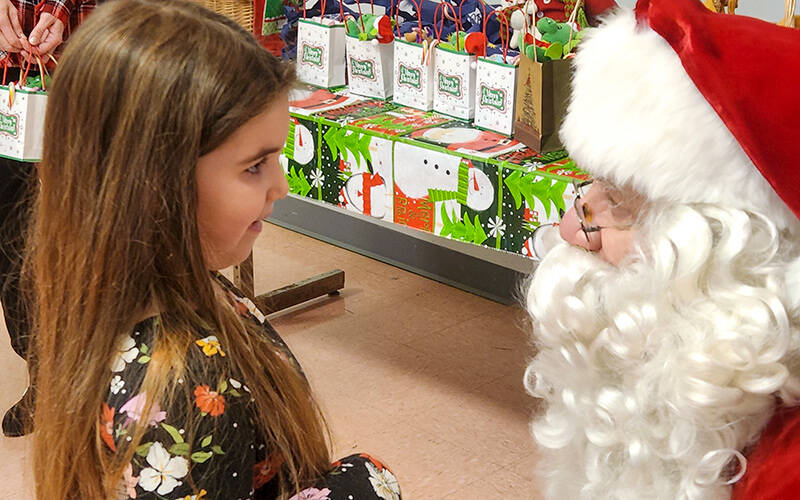 GREECE — With just a few days remaining before he was to mount his sleigh and deliver gifts all over the world, it may have seemed unlikely that Santa Claus could take time out from Christmas Eve preparations at the North Pole.

Yet there he was on Dec. 18 at St. John the Evangelist Parish, spreading cheer and goodwill as only Santa knows how.

Bearing ample amounts of smiles and hearty laughter, Santa was the main attraction during a coffee hour in the parish center following St. John the Evangelist’s 10 a.m. Mass. He greeted children one by one while seated in a corner of the facility, sending each young person away with a small gift while displaying patience and kindness — especially toward those who needed some encouragement to approach the jolly special guest.

Youngsters at St. John the Evangelist spend time with Santa

One such person was Nora Goodman, 6 — who, according to father, Bill, had been initially shy about the prospect of meeting Santa. But boosted by the moral support of her doll, Lily, whom she clutched while walking slowly up to him, Nora was one of the first youngsters that day to have a chat with Mr. Claus.

Also among Santa’s early visitors was Jordan Lombardini, 5. Asked if she had requested any special gifts from him, she replied, “A (toy) hairdresser’s set.”

As Jordan spoke, her brother Landon, 3, glanced in Santa’s direction with a mix of interest and hesitation. “He just wants to eat his yogurt first,” explained their mother, Jenelle.

Jordan, in addition to spending time with Santa, noted that she’s gotten into the Christmas spirit recently by helping to decorate Christmas cookies at home and erect the family Christmas tree.

“She’s been asking since before Thanksgiving, ‘When are we putting (the tree) up?’” Jordan’s mom remarked.

Speaking of Christmas spirit, that vibe was evident all around the parish center, which filled up quickly as soon as Mass was done. The party, hosted by St. John the Evangelist’s music ministry, also featured many trays of Christmas cookies made by parishioners as well as a variety of other snacks. Holiday decorations surrounded the room, and all the table coverings were in red and green.

Meanwhile, Santa further enhanced the festive atmosphere by posing for photographs with people of all ages and going from table to table to chat more with the young and young-at-heart.

According to Father Peter Enyan-Boadu, St. John the Evangelist’s pastor, the annual Christmas gathering with Santa is a long-standing tradition of the parish and always well-attended. He said he’s especially heartened to see so many young children at a parish event.

Tags: Christmas, Monroe County West
Copyright © 2023 Rochester Catholic Press Association, Inc. All rights reserved. Linking is encouraged, but republishing or redistributing, including by framing or similar means, without the publisher's prior written permission is prohibited.