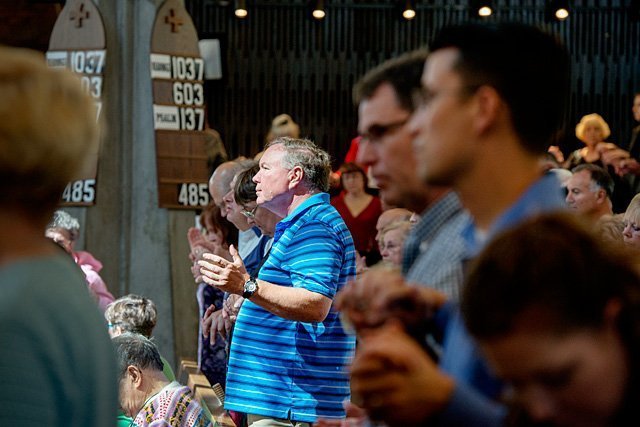 Tom Marton prays the Lord's Prayer alongside parishioners at Holy Name of Jesus Church in Greece during the final regularly scheduled Mass at the church Sept. 21.

GREECE — With a picnic, a cake, a band and a packed church, Holy Name of Jesus’ Sunday Mass Sept. 21 could have been mistaken for just a spirited celebration of the parish’s 50th anniversary.

But the tears of parishioners revealed the truth: The church also was marking its final regular Sunday Mass.

A letter read during weekend Masses June 28-29 notified parishioners that Bishop Salvatore R. Matano had decreed that the parish would be merged with St. Charles Borromeo Parish in Greece effective July 14. For the time being, Holy Name of Jesus will continue to be available for weddings, funerals and other occasional Masses.

When the merger was announced, Father John Firpo, pastor of the merged parish, said the merger was motivated by a lack of available clergy throughout the diocese, the financial burden of having multiple parishes, continued low Mass attendance and the close proximity of the two parishes. Father Firpo had been pastor of St. Charles Borromeo and pastoral administrator of Holy Name of Jesus before the merger.

"All of us who have been involved in this discernment process over the past year and a half are very sensitive that these feelings are present here today as we gather at this table," he said. "We respect these feelings, as well as your hope, your belief that our God is present with us each step of the way. This is our God’s promise, and we know that our God is faithful to his word."

At the end of the Mass, Deacon Richard Lombard recognized those who had celebrated sacraments at the church as he incensed the baptismal font, ambry where the sacred oils are kept, entrance to the church and area in front of the altar. He noted after the Mass that he started his diaconal service at Holy Name of Jesus and served a total of 17 years through two stints at the parish. According to a parish history, he was the first permanent deacon in the diocese employed as a full-time pastoral associate.

"My heart is here," Deacon Lombard said. "This is where I started out, and I love the people."

He said many came together to plan the final liturgy and to mark the parish’s 50th anniversary with the picnic, cake and music.

"It was hard to do it," Deacon Lombard said. "It took a lot, but we got it done and I can’t say enough about the people of Holy Name of Jesus Parish."

The parish was founded June 23, 1964, on Bonesteel Street from the boundaries of St. Charles Borromeo, St. John the Evangelist Parish in Greece and Sacred Heart Cathedral in Rochester. According to a history of the parish by Bernadine Weeg to mark its 25th anniversary, Bishop James E. Kearney chose the name Holy Name of Jesus from a list supplied to him by the first pastor, Father Thomas Reddington.

"Fifty years ago, Holy Name of Jesus Parish was started with the changes that were given to us by Vatican II," Father Firpo said. "That was a time of new beginnings, a new spirit. The windows of the church were opened as our doors are opened today."

The parish’s patron, according to the history, was St. Martin of Tours, and the street on which the parish was located was renamed St. Martin’s Way in 1966. Before the church was built, Masses were celebrated at the former Cardinal Mooney High School in Greece.

The church was built in 1967, and the first Mass was celebrated that Oct. 29. Father Reddington, according to a history of the parish, called for the parish to be designed with some of the guidance of the Second Vatican Council in mind, including not having an altar rail and incorporating a separate chapel of the reservation of the Blessed Sacrament.

Donald Cramer of Greece, who joined the church in the 1970s and who was recently on parish council, remembered Father Reddington for instituting the tradition of baking bread for new parishioners. That tradition was later picked up by Father Jack Rosse.

"These kinds of things attracted us to this community, and that’s why we stayed here," Cramer said. "We’re a very loving and close community."

Many of those parishioners said the day was filled with emotions.

"My dad’s funeral was here, so there is a lot of emotion," said Carol Charvella of Pittsford. "I understand (the decision to merge the parish) and I support it, but it’s sad."

Though Charvella and her husband moved away about two years ago, they still had close ties to the parish, which both she and her mother, Linda Pepe, described as warm and friendly. Pepe said like many of the other parishioners, she plans to attend St. Charles.

"It’s very close to my home, too, although I’m going to miss coming here," Pepe said. "It was a small church and everybody knew each other."

Motioning to the pews that had been full moments before, Pepe said, "I wish it was like this every week."

Yvonne Currie of Greece said attending Holy Name of Jesus Parish was a natural choice when she and her husband moved to the neighborhood 42 years ago. She said one highlight of the parish was the living Stations of the Cross presented by the students in the school of religion. She said even as fellow parishioners have moved away from the area, they have kept in touch with her.

"It’s kind of like moving away from family," Currie said. "Everybody — most of us — will still go to St. Charles, but it’s going to be a transition."

A special welcome for parishioners at St. Charles is planned for the weekend of Sept. 28 and 29.

Bishop Matano also will celebrate the feast of St. Charles Borromeo at the 4:30 p.m. Mass Saturday, Nov. 15, at the Greece parish.