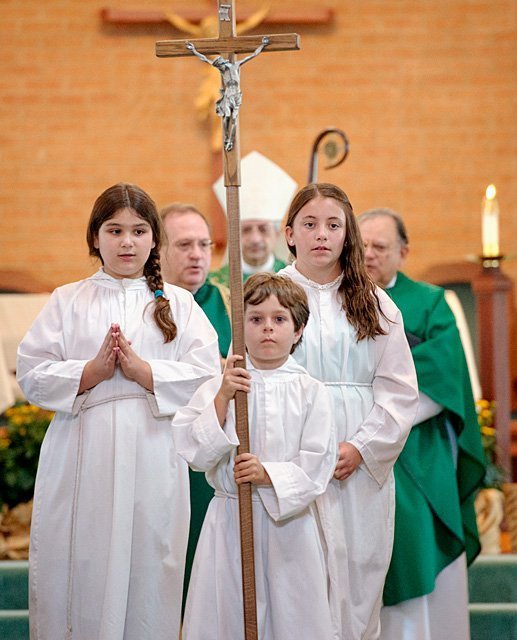 Connie Schmeer will never forget the fundraising spaghetti dinner in the late 1960s at St. Mark Parish in Greece, when parishioners cooked for about 900 people using a small, four-burner stove.

Schmeer describes it as "quite an ordeal." She said an orchestra that had agreed to play for the event helped to soothe the hungry masses.

"They were playing, and we just kept saying, ‘Keep playing,’" Schmeer said. "This was the first big thing in our church hall."

Schmeer said that since that meal, the parish has gained lots of expertise in hosting fundraisers and meals. The latest will be a picnic at 12:15 p.m. Aug. 17 to mark the parish’s 50th anniversary.

The parish also celebrated its 50th anniversary and Father Lou Sirianni’s 40th anniversary of ordination with a Mass with Bishop Salvatore R. Matano July 27. Parishioners also will go together as a group to watch the Rochester Red Wings play at 7 p.m. Aug. 16 at Frontier Field.

The parish’s roots are in the former lakefront Star of the Sea Chapel on Edgemere Drive, which was set up in 1910 to serve the families vacationing on Lake Ontario, said Father Sirianni, pastor of the parish. By the 1960s, there was a need for a full-time parish.

"You already had a lot of summer homes along the lake and ponds," he said. "Those were becoming full-time homes by then and so it was a lot more convenient for people to come over to St. Mark’s than to continue going to Mother of Sorrows. At the same time, a lot of new housing was going up."

Even after St. Mark was formed in 1964, the parish met for several months at Star of the Sea Chapel until a church was built on Kuhn Road.

Father Sirianni said the parish is very family-oriented, with many parishioners related to each other and with many large families in the area.

"We’re going through the basic struggles that every parish is, the up and down and how to bring the new evangelization into place," said Father Sirianni, who is only the third pastor to have served the parish in its five decades.

He said in response to those struggles, St. Mark is beginning a book study on Rebuilt: Awakening the Faithful, Reaching the Lost, and Making Church Matter, which chronicles the transformation of a Catholic parish to help it better reach a contemporary society by putting the Gospel in action.

Reaching out to the community is somewhat of a return to the roots of the parish, Schmeer said. The parish’s first pastor, Father Joseph Donovan, walked the beach and talked to people, trying to spread word about the new church.

"He was like a fisherman, getting the fishes to join the church," she remarked.

The parish also has had a longstanding outreach to the deaf community, thanks to the ministry of Father Thomas Erdle, who knew American Sign Language; the parish continues to offer sign interpretation for parishioners. Father Erdle, who became pastor in 1985, led the parish in building a new church, parish offices and a new priests’ residence. Father Sirianni became pastor in 2005.

The parish even fostered one priestly vocation: Father Sam D’Angelo, who serves with the Missionaries of the Precious Blood in Sudbury, Ontario, Canada.

Schmeer, who taught the future Father D’Angelo in religious education, said she was glad to see a vocation arise from the parish, as she had always encouraged her students to give back.

She recalled when she first got involved as a parish volunteer in the early days of the parish; she was a busy mother of four and was approached to join the women’s guild (later to be renamed the Rosary Guild).

"I wanted to know what their goals were," she said. "If I was going to spend the time, I wanted it to be a worthwhile thing."

She said she was impressed by the group’s focus on fundraising for the fledgling parish. In addition to the guild, she wound up teaching second grade for 25 years. Longtime volunteer Mary Hannick was the first one to coordinate the parish’s religious-education program, Schmeer said. In 2003, Schmeer helped to revive the parish’s senior group, which now has 140 members.

"We are a family parish," Schmeer said. "I think we’re a very alive parish. I think our programs are good. We have so many things to offer people."

Deacon Jim and Mary Chatterton said ever since joining St. Mark’s in 1973, the parish has been home for them.

"It is a very caring community," said Mary Chatterton, who is a pastoral associate at the parish. She and her husband help to coordinate the parish’s Hearts and Hands outreach program, and Deacon Chatterton also has assisted the parish with bookkeeping.

"If there’s a need, and people are asked, they come forward," he said.