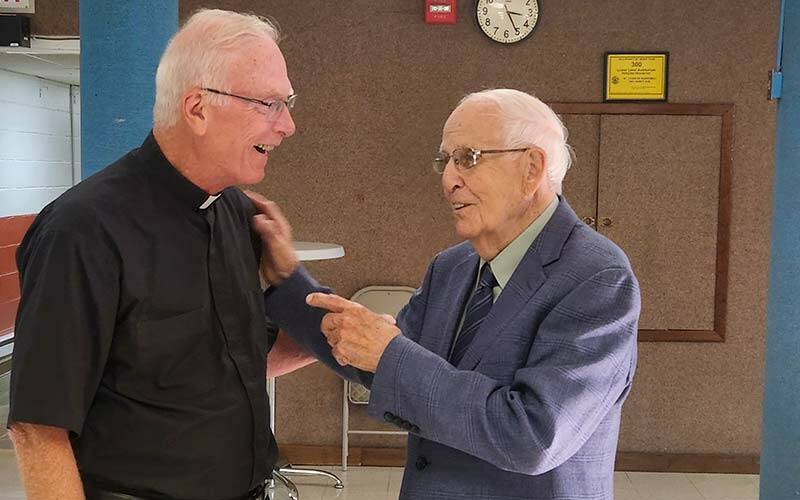 GREECE — He received two ovations during the 4 p.m. Mass Sept. 17 and additional applause as he entered the parish hall for a reception in his honor that followed.

After 44 years of continuous service at St. Charles Borromeo Parish, Ralph Zecchino has most certainly earned that level of adulation.

Zecchino recently retired as director of the parish’s sanctuary choir. Beginning his duties in 1978, he built the choir from 10 or so members into a professional-sounding unit of more than 50. Many choir members also have belonged to the Greece Choral Society, for which Zecchino served as founder and director from 1970-2014.

Zecchino has a lengthy musical background. A Rochester native, he began his teaching career in Chicago, where he occasionally sang the national anthem for Chicago Blackhawks hockey contests — including the game when the team clinched the Stanley Cup in 1961.

After moving back to Rochester, he taught music for eight years at the former Madison High School in the city and then spent 26 years teaching at Greece Arcadia High School, from where he retired in 1995. Highly regarded by his peers, Zecchino has received a number of awards and honors and also has served as adjunct teacher at the Eastman School of Music.

Zecchino, who is a St. Charles Borromeo parishioner, began working at the church part time in 1978 after having been a musician at several Protestant churches. He’s been joined for many of his musical endeavors over the years by his wife, Sandy, who specializes in piano. The couple were acknowledged toward the end of the Sept. 17 liturgy by Father John Firpo, pastor of St. Charles Borromeo, who called the Zecchinos “the founding father and mother of our music program.”