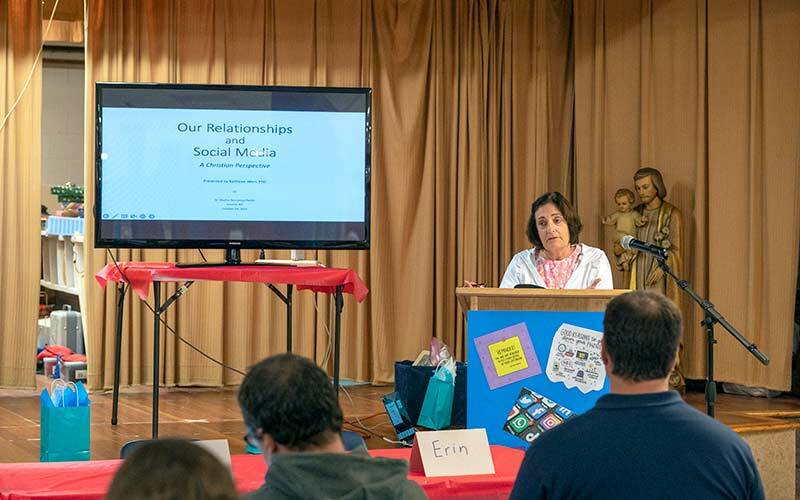 GREECE — From Janice Opladen’s perspective, “Social media isn’t good or bad. It’s the users who make it good or bad.”

Opladen is all too familiar with the bad, noting that her 17-year-old son, Joshua, took his life in 2012 after being repeatedly harassed on social media. She said the online attacks weren’t the only factor leading to his death, “but a big part.”

Yet despite her personal tragedy, Opladen doesn’t speak out against social media. Rather, she cautions people to be kind and thoughtful while they’re using it.

“Think about the impact you can have on somebody,” she said while serving as a panelist for “Our Relationships and Social Media: A Christian Perspective.” The interactive program took place Oct. 24 at St. Charles Borromeo Church, where Opladen is a parishioner. During the evening, tips and resources were shared with participants —- particularly families of middle- and high-school students — regarding how much time people devote to their electronics and the types of communication that they send and receive.

Katy Allen, a native of St. Charles Borromeo and the event’s facilitator, cited several positives connected with social media. Among them are being able to reach people more quickly, especially in an emergency; reducing isolation and loneliness for folks with limited mobility, including the elderly and those affected by the coronavirus pandemic; providing a place of acceptance among youths who are marginalized in face-to-face settings; and connecting with folks in faraway places who may not have been reachable otherwise.

However, Allen said, an overload of electronic activity — on such popular platforms as TikTok, Instagram, Snapchat, YouTube and Twitter — also can carry risks. She cited such potential outcomes as weight gain due to lack of physical activity; sleep deprivation; and depression and anxiety.

Allen, a training and evaluation specialist at the University of Buffalo’s Alberti Center for Bullying Abuse Prevention, added that healthy personal development can be hindered when online relationships replace face-to-face human contact. She cited a Pew Research Center study released in August 2022 noting that 97 percent of teens use the internet daily, with 46 percent saying they’re online almost constantly, and 51 percent of those almost-constant users acknowledging they’re online too much — a sign that they’re unhappy with their habits but not easily able to alter them.

Panelist points out rise of ‘technoference’

Following Allen’s presentation, participants split into small groups to discuss such topics as parents guiding their children’s social media usage; being a good digital citizen; supporting youths who are bullied on social media; and supporting young people through sadness and depression.

One notable discussion involved the concept of “technoference.” Kidane Malik, a panelist who led a small group on this topic, said that people of all ages are contributing to a rapid rise in technoference, which he described as “any time, in any way, that our screens get in the way of our life in the real world.”

Examples of technoference cited at the Oct. 24 gathering include being on one’s smartphone when a family member comes home and wants to have a conversation; being so attached to social media that family visits are skipped; and drifting off into smartphone usage while watching television with others.

Father John Firpo, pastor of St. Charles Borromeo, made special note of the Oct. 24 program’s subtitle, “A Christian Perspective.” He said that as a priest, he views social media through “a very specific lens” regarding the value systems employed: How do we present ourselves? Are we being respectful of ourselves and others? Do we act with integrity and honesty? Are we building up the community?

As the event neared its conclusion, Allen posed the question, “What would Jesus want to tell us about social media use?” Responses echoed Father Firpo’s concerns about exhibiting kindness, integrity, positivity and respect for other people’s feelings.

Allen, noting that social media is a very recent historical phenomenon, voiced hope that its usage will trend more toward positive outcomes as it continues to evolve.

“When we get it right, we will build stronger and more vibrant societies,” she said.