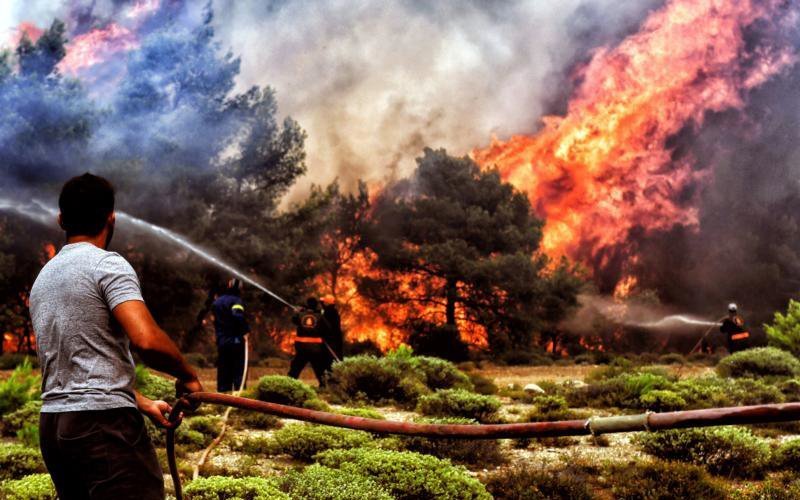 OXFORD, England (CNS) — Catholic leaders in Greece urged their country to learn lessons from the worst wildfires in a century, which left at least 91 people dead and more than 500 injured.

“Help and support have come from all over Greece and Europe in wake of this tragedy, and I think we’ll recover,” said Archbishop Nikolaos Printezis of Naxos, Greece, general secretary of the Greek bishops’ conference.

“But there are still many dangers, and we need real steps to prevent such disasters from recurring. Our government, churches and people at large must learn the lessons,” he told Catholic News Service Aug. 3.

The archbishop said the crisis had occurred when hopes were rising of improved conditions, following a June deal to end a $270 billion international bailout stemming from Greece’s eight-year economic crisis.

“Several Catholic families have also lost homes and possessions, and our dioceses have all held requiem Masses for the victims,” Archbishop Printezis said.

“These are still harsh times for Greece, and it’s essential all sides collaborate and work together for the whole country, rather than just criticizing and opposing the authorities,” he added.

Caritas Greece said it had organized collections at Archdiocese of Athens parishes, noting in a statement that many survivors needed “psycho-social support,” as well as food and shelter.

Meanwhile, Archbishop Sevastianos Rossolatos of Athens, bishops’ conference president, told Italy’s Religion Information Service that there had been fears of a “veritable massacre” as residents of several towns fled into the sea to escape the flames. He said church leaders were grateful to those who had risked their lives to save others.

“However, these events must make us question our respect for the environment, which also involves following the rules,” Archbishop Rossolatos told the news service July 25.

Visiting Penteli Aug. 1, where an Orthodox monastery was burned, Archbishop Ieronymos of Athens and All Greece, told reporters the country needed “silence, reflection, prayer, internal searching and, above all, practical support” when dozens were still missing.

However, Archbishop Printezis said he regretted that Orthodox leaders had not responded to Catholic offers of help, and that the crisis had not “brought the churches together.”

“Catholics still face great difficulties in Greece, although we have friendly ties with some Orthodox leaders and are always ready to cooperate, there are no official ecumenical relations,” he said.

“Of course, we must stay optimistic. But we must also learn from tragedies like this, and not just talk about them when they happen. We must think about the future and be ready to work together.”