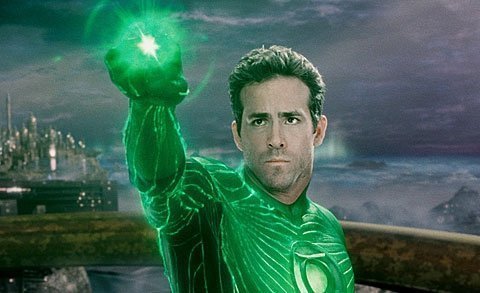 NEW YORK (CNS) — It’s an unsettling sign when a contemporary film might aptly be subtitled "Triumph of the Will" — the moniker, of course, of Leni Riefenstahl’s 1935 pro-Nazi "documentary" and a phrase that highlights the Hitler movement’s debt to the atheistic, nihilist philosophy of Friederich Nietzsche (1844-1900).

But such, surprisingly enough, is the case with the mediocre comic-book adaptation "Green Lantern" (Warner Bros.), an adventure whose underlying mythos pits will against fear, glorifying the former and claiming for it powers that are at best unrealistic and at worst unintentionally blasphemous.

Granted, director Martin Campbell’s screen version of a set of tales that date back to 1940 is a sci-fi fantasy, and one within which the will is consistently directed and trained to good ends. Adult viewers, accordingly, will likely have little difficulty either sorting through the values on offer or dismissing the muddled metaphysics out of hand.

Responsible parents of faith, nonetheless, will be reluctant to have their targeted teens exposed to a set of ideas — e.g., "Will turns thought into reality," meaning, in this case, physical reality — that seem tainted by a range of crackpot ideologies.

The man eventually achieving whatever his mind is conceiving is devil-may-care test pilot Hal Jordan (Ryan Reynolds). Through a set of circumstances — and a wad of exposition — best left on screen, Jordan suddenly finds himself endowed with superhuman powers and enlisted, somewhat against his will, in the ranks of an elite force of intergalactic warriors.

Presenting the yang to Hal’s yin is brooding biology professor Dr. Hector Hammond (Peter Sarsgaard). When Hammond is accidentally infected with super-villain negative energy — via another chain of events over which we needn’t tarry — it offers him the chance to act on his long-standing jealousy of Hal’s on-again, off-again relationship with aeronautics executive Carol Ferris (Blake Lively) whom both men have known — and, presumably, loved — since childhood.

The effects-driven proceedings that follow do see Hal struggling to become more responsible — in the bedroom as well as on the cosmic beat. (We know his behavior within the first forum is in need of rehabilitation since the opening scene shows him parting company with an acquaintance of recent vintage after what was clearly a one-night stand.)

But scenes in which Hal creates physical objects by willing them into existence — a form of creativity reserved to God alone — as well as a script that presents the will, properly channeled, as the strongest force in the universe suggest a worldview not easily squared with the teachings of Scripture. Well-grounded grown-ups may want to hunt for that congruence; youngsters should not undertake the search.

The film contains themes requiring mature discernment, much bloodless violence, implied casual sex, a few uses of profanity as well as some crude language and sexual references. The Catholic News Service classification is A-III — adults. The Motion Picture Association of America rating is PG-13 — parents strongly cautioned. Some material may be inappropriate for children under 13.